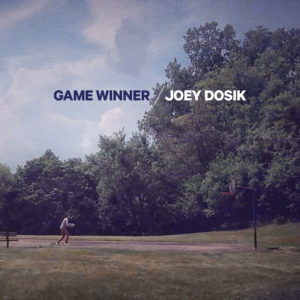 Reason We’re Cranking It: Dosik’s latest offering (being re-released with four bonus tracks), loosely inspired by the game of basketball, is a soulful, shoulder popping good time… a slam dunk. With a natural and seamless ease in the way he delivers on each track, the impassioned piano man ignites recollections of long lost pick-up games with friends while the radio sat on the blacktop pumping out songs that would forever be tied to memories. There’s a shared sentimentality to the EP that makes everyone who listens to it a member of the same team, and in crafting it in such a way, Dosik has created a true game winner.

What The Album Tells Us About Him: Looking past the fact that he’s a Lakers fan (we bleed Celtics green here!), Dosik is impassioned and wears his heart on his sleeve, combining two of his loves, basketball and music, into a tell-all tale of who he is at his core. We can’t wait to hear what he shares with us next.

Track Stuck On Repeat: To steal yet another term from the world of sports, the title track is deserving of an instant replay. If “cool” had a signature sound, “Game Winner” would be it. Picture Samuel L. Jackson as Jules Winnfield, cruising around in a long lost scene from “Pulp Fiction,” one hand on the steering wheel and another holding firm to a Big Kahuna burger, as he grooves out to this song en route to lay out some epic monologue that people will recite for generations to come. That should give you a pretty good sense of just how cool this song is.

Coming To A City Near You: Joey Dosik tour dates can be found here.