We recently sat down with the producing pair to discuss making independent films in the content-binging age, finding the perfect Brian, and why everything is coming up Mill House.

TrunkSpace: There is more content reaching the masses in any given week than ever before. I know it seems counterproductive, but does that actually make it more difficult to get a film made these days? We would think that the more content saturating the market means that each individual project has a steeper hill to climb to capture eyeballs?
Rosenthal: I don’t necessarily think so. Yes, there is more content out there than ever before, but this is largely in part due to the fact that there is a higher demand for content than ever before. You have an audience that now is seeking new entertainment every evening on tens of streaming platforms beyond the once bi-monthly pilgrimage to the movie theater, and what’s more, given this age of connectivity we live in, an audience that is fractured into very informed and opinionated sub-groups. Making films, especially indie films, will always be a steep hill to climb, but I think one fact remains timeless, there will always be a place and market for quality films, and a film’s quality will always speak for itself.
Foley: There’s more content out there, but the quality of content isn’t necessarily increasing. What it does mean, however, is that there are more outlets to distribute content; which is, we believe, a very good thing for independent filmmakers. More distribution channels and more distributors, means a higher demand for a larger amount of quality content. 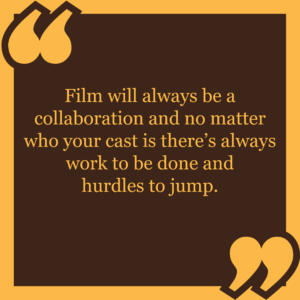 TrunkSpace: Your film “All Square” is getting a lot of early buzz. From a business standpoint, what is the key to turning that buzz into a profit and finding not only critical success, but commercial success as well?
Foley: The more eyeballs we can get on the film, the better, obviously. Buzz will hopefully translate into interest, and if people are interested enough, they will hopefully be willing to pay to see the movie. Right now, our goal is to get the movie in front of those who can help us to create a positive buzz – the press, the tastemakers and the influencers.
Rosenthal: A good cook never reveals their secret sauce.

TrunkSpace: How did “All Square” first come into your lives? Was it one of those projects that you knew you wanted to be a part of immediately?
Foley: The writer, Timmy Brady, had been a friend of mine for a long time. He originally sent me the script for feedback. Jonathan and I had just formed a production company, and we made an offer to come on board to produce and finance half of the budget. Through Michael Kelly, our producing/financing partners at Paperclip, Yeardley Smith and Ben Cornwell joined shortly thereafter and we were off to the races.

TrunkSpace: The film has an incredibly accomplished cast. As producers, does that make your lives easier when you can sit back and go, “Okay, well performance-wise we have nothing we have to worry about so now we can focus on X, Y and Z.”?
Rosenthal: Film will always be a collaboration and no matter who your cast is there’s always work to be done and hurdles to jump. Working with experienced actors is always reassuring, but I think one thing you learn is that on any set, the energy you bring and how seriously you approach the production is, in return, what you receive from your cast and crew. It’s never safe to assume that because you have one right element that everything will fall into place. A good actor shows up ready to do their part to the best of their ability but that still means you have to, in turn, do the same.
Foley: We were very lucky on this one. We had an incredibly accomplished cast, but we also had an experienced crew (from “House of Cards”) and a seasoned director with a very clear vision for the movie. We had other challenges to overcome, but the cast, crew, script and director were all top notch.

TrunkSpace: TrunkSpace recently featured your young star Jesse Ray Sheps. That is a role that was crucial to the success and believability of your film. How much discussion went into how you were going to cast the part and what was it about Jesse that made everyone confident he was your Brian?
Foley: We went through an extensive casting process when trying to find our Brian. This was the biggest ticket item for us. We attempted to cast locally out of Baltimore, but had no luck. We went national and looked at kids from across the country, including LA & NY… we still had a tough time finding someone that could truly fit the role. Eventually, we brought on Casting Director, Meredith Tucker, who was able to find us two really solid options. John Hyams, our director, flew out to NYC to meet with the two young actors; along with Michael Kelly and writer, Timmy Brady. Once the producers all had a chance to see the tapes, it was a unanimous decision that Jesse was our Brian.

Rosenthal: Casting and working with child actors is always a tricky process. We actually spent nearly two months trying to cast the role of Brian before we found Jesse. I think the hardest part, especially for a film like this one and a young blossoming actors of Jesse’s age range, is we really needed someone who could just be a kid. So often young aspiring stars are stuck looking up the seemingly insurmountable task of what it means to be an actor; a pitfall that all too often leaves kids overacting or taking what we’ve come to call, “The Disney approach.” Between finding a kid with natural athletic abilities and finding one who could just be that kid stuck in that crossroads of childhood and adolescence… let’s just say when Jesse came around it was a simple decision.

TrunkSpace: The film is set to make it’s world premiere at SXSW on March 10 at 7 p.m. at the ZACH Theater. Will you both be there and is a screening of this capacity something you can comfortably sit through or will you white knuckle your way through it until the end?
Rosenthal: We will both be there, and actually for us, this one will be a fun experience, I hope, that we’ll be able to just sit back and enjoy. Not being in official competition and simply being a spotlight premiere affords the luxury of loosening your grip, just taking in the crowd reaction and really celebrating finishing the film, which is always an accomplishment.

TrunkSpace: You have a number of additional projects in the works. Was there anything you took from the “All Square” experience that you’ll apply to those others moving forward? Was there a lesson learned that you don’t want to learn a second time?
Foley: On each film you continue to learn and improve your ability as a producer. We both learned several lessons on “All Square” that we will continue to apply to every movie we produce moving forward. In any scenario, I think we can both agree that we only want to learn a lesson once… if possible.
Rosenthal: I think if there’s not a lesson to be learned from every project you work on then you’re not paying attention. Filmmaking is a learning endeavor that lasts a lifetime. There will always be a “happy dissatisfaction” in any creative process, the moment where you know you could keep refining forever but tell yourself it’s time to hit print, so to speak. If there’s one lesson I can share that we took away from this, I think It would be that we are on the right path and that our model for filmmaking we’ve come up with works and was not just a flash in the pan-type phenomenon.

TrunkSpace: When you guys put together your company, what were the goals? What types of films did you want to make and if we flashed forward 10 years, what would you want the identity of your company to be?
Foley: We met on a lower budget indie film called, “Desolate.” It was there that we realized we were capable of getting a lot of bang for our buck and that we could find ourselves a niche by focusing on similar budget movies. Whether it’s just a few years from now or 10 years from now, our goal is to be the first call on any aspiring filmmakers list of top indie producers. We hope to establish a reputation that Mill House is a team which supports and nurtures young talent and consistently finds ways to bring our films to the best possible release platform for our filmmakers.
Rosenthal: Honestly, and this may sound eye roll worthy, but we set out just to make good films – stimulating films that we could be proud of and would want to watch ourselves again and again. And I think that if in 10 years we can look back at a catalog of films, good films, some that won awards… sure that would be nice… some that had sales above expectations… of course you have to pay to keep the dream alive…  but I think at the end of the day, to be identified as a company that had creative integrity and stood behind what indie filmmaking is all about, telling stories and taking risks.

TrunkSpace: Your company is called Mill House Motion Pictures. As a pop culture site, we have to ask… does the name have anything to do with “The Simpsons” and Bart’s BFF, Milhouse Van Houten?
Foley: The term “Mill House” actually comes from the classic mills you find at the side of a river that used the water to grind flower, etc. The idea being: it’s traditional, functional, classic, timeless and constantly working… what was true centuries ago, still holds true today – like the basic principles of storytelling. However, we are both massive fans of “The Simpsons,” and it doesn’t hurt that we’re able to say… “Everything’s coming up Milhouse!”