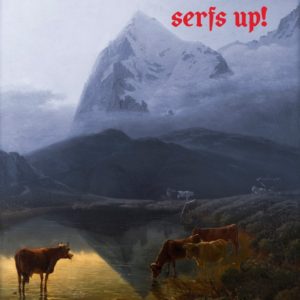 Reason We’re Cranking It: A million light years ahead of their 2016 sophomore effort “Songs For Our Mothers” in both craft and creativeness, “Serfs Up!” is an eclectic mix of tunes that seem to be making sense of our strange world in real time through song. It’s group therapy with a groove.

What The Album Tells Us About Them: In-fighting and personal demons have followed the band since their formation in 2011, but you wouldn’t know it by listening to them come together with such visionary cohesiveness on this album. What they’re saying may not speak to everyone, but how they’re saying it is going to capture an audience that they probably never intended tapping into when they first came together.

Track Stuck On Repeat: If Monty Python formed as a group of glam rockers rather than a comedy troupe, they may have produced something along the lines of “Tastes Good With The Money” as opposed to “Always Look on the Bright Side of Life.” We’re not laughing, but we’re certainly still having a good time.