The latest album from Cut Worms, the brainchild of Brooklyn-based Max Clarke, has been finished for some time, so unleashing it into the world is a creative win for the singer/songwriter, one that formally signals that it’s time to move on to new 8-track endeavors. While Clarke says he has been actively writing quite a bit lately, for the listener it is important that we not get ahead of ourselves, or in this case, the music. Released today on Jagjaguwar, “Hollow Ground” is a sonic time traveler – influenced by the past, made in the present, and enjoyed in the future. (Check out our review here.)

We recently sat down with Clarke to discuss his songwriting process, guitar garage sale adoption, and why a strong desire to do something well trumps natural talent.

TrunkSpace: As you gear up to release new material to the world, what kind of emotions do you juggle with?
Clarke: This record’s been done for a while, so I just want it to be out there at this point. But yeah, sometimes with putting stuff out there, there’s some hesitancy as far as, “Are people going to like it?” or whatever, but… I don’t even really care that much anymore. (Laughter)

TrunkSpace: A number of the songs off of the album have been with you for some time now. Do they feel like old friends or do you want to move beyond them at this point and make new friends?
Clarke: Yeah, I want to focus on writing new stuff. I’ve been writing a bunch lately, but I’m not totally sick of the songs on the record yet, which considering how many times I’ve played them in the past couple of years, I guess is probably a good thing.

TrunkSpace: Are they still reflective of who you are today, in 2018, as an artist?
Clarke: I think they still translate. I think about them differently now, probably, than when I wrote them, but it’s hard to… I don’t know. I guess, just time goes on. You write something in a certain moment, and then it just keeps going. I can still kind of go back to, I guess, especially the home demos that I’ve done, and remember more where I was at at that time by listening to it.

TrunkSpace: As you mentioned, you have a desire to work on new material, but what does that process look like for you in terms of core 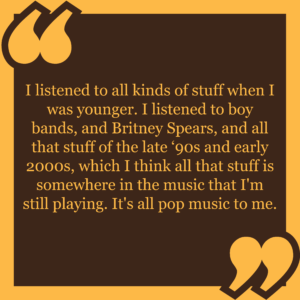 inception to a finished track?
Clarke: It’s different every time. There’s not really any formula I’ve come up with that allows me to just put it all down and go from start to finish in a timely manner. It’s a lot of meandering around, seeing what works and what doesn’t, recording a version of something, and then seeing how it sits over a couple days – and if it doesn’t, then changing it.

TrunkSpace: Can a song live inside your head for a long time before you put your stamp of approval on it?
Clarke: I would say so, yeah.

TrunkSpace: We read that you picked up your first guitar from a garage sale and then you nursed it back to life. Did that process help you establish an appreciation for the instrument beyond just the desire to play it? It’s almost like that whole, you pay for your own car and you treat it better kind of thing.
Clarke: Yeah, kind of. At the time, I was 12 or something, I didn’t personally fix it up. My mom brought it to a local music store, and they put strings on it and fixed some of the other pieces – put a new bridge on it and stuff. But yeah, it definitely became something that I cared about and took care of, but I’ve never been that much of a gear head as far as guitars and stuff. I tend to not treat my instruments that well. They get banged around.

TrunkSpace: It’s just fascinating to think about an instrument’s journey in that regard. Like, what did that particular guitar experience before it found its way to you?
Clarke: For sure. When my mom got me the guitar from the garage sale, it had this embroidered, weird rainbow strap that looked like it was from some ‘70s church group or something, which, I wish I still had that strap. It’s gone now. It’s lost. But yeah, who knows who owned that thing, and how many times somebody played it and went through all kinds of emotional things with it, probably.

TrunkSpace: For you, what is it that you get from writing and performing music that you can’t get from being a listener alone? What does the process give you?
Clarke: I don’t know. I’ve just always had, ever since I was pretty young, an itch that I’ve felt like… I remember going to, any time there was a band or something, from the time I was 12 or 13, to see a live band. I remember once going to – I grew up in Cleveland – going to the Rock & Roll Hall of Fame. They had this high school Battle of the Bands thing, and seeing some of those people playing, and just feeling like I could do that, and do it better. But it took me a really long time to actually do that.

TrunkSpace: Did the instrumentation side of things come easy to you? Was it natural or was it something you had to work at?
Clarke: I worked at it a lot, but I wanted to work at it. Natural talent… I feel like it’s more of just whether or not you want to do it, or want to do the work, or if there’s something that drives that. It’s like working on a puzzle or something.

TrunkSpace: Going back to that 12-year-old you that got that guitar for the first time. If you could sit down with him now, would he be surprised by the artist you have became?
Clarke: Maybe. I don’t know. There’s no way that I could have known how things would pan out, but I did want to eventually get to this point.

TrunkSpace: But were you listening to music in that time period that you would say directly influenced what your sound is today?
Clarke: I listened to, I guess, whatever was around at that time. I listened to all kinds of stuff when I was younger. I listened to boy bands, and Britney Spears, and all that stuff of the late ‘90s and early 2000s, which I think all that stuff is somewhere in the music that I’m still playing. It’s all pop music to me.

TrunkSpace: Do you think the next record will be far removed from “Hollow Ground,” or will it still feel close to what that album represents?
Clarke: I think it will be somewhat close. I’ve just been going after a certain sound, I guess, for a while now. That’s the closest I’ve gotten so far, but the next thing will probably just feel like another attempt at that, but maybe from a different angle.