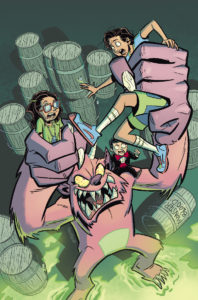 Favorite Comic Book Character Now: No idea… there’s a lot of great ones.

TrunkSpace: How would you describe your art style?
Fenoglio: Personally, I think I’m kind of a mix of Jeff Smith and Chris Samnee… if both of them hit their head really hard and forgot how to draw.

TrunkSpace: How important were comic books in your life growing up and is that where you discovered your love and inspiration for drawing?
Fenoglio: Comics were my everything when I was a kid. I knew I wanted to draw comics when I was six-years-old. I drew even before that… so to be honest, I’m not sure why I started drawing, but my mom says it was the only activity I did that kept me quiet.

TrunkSpace: Was there a particular artist or title from your childhood that you remember being drawn to and inspired by?
Fenoglio: There were… a lot. Jeff Smith, Alex Ross, Jim Lee, Scott Morse, Humberto Ramos, Joe Madureira… and a ton more I can’t think of at the moment.

TrunkSpace: How did you decide to approach your career in comics? Did you formulate a plan of how you wanted to attack what is known for being a hard industry to crack?
Fenoglio: God, I wish I was that smart. A lot of it was luck and persistence. I just kept going, even when it probably was in my 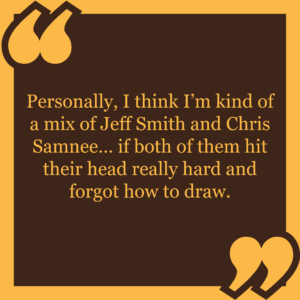 better interest to quit. I wouldn’t recommend taking that route, but it eventually worked. For anyone trying to get into the business, make a plan, yes, but persistence will get you everywhere. It’s a rough industry, and even if you’re good, chances are you won’t “break in” on your first go.

TrunkSpace: What was your biggest break in terms of a job that opened more doors for you?
Fenoglio: Doing colors for “Orphan Black” for IDW. That got my foot in the door and showed that I can be a professional and make good work on a deadline. It also gave me the ear of an editor who would look at artwork I submitted with more than a passing glance.

TrunkSpace: A lot of people say that breaking into comics is the hardest part of working in comics. How long did it take you before you started to see your comic book dreams become a reality?
Fenoglio: It took me a long time to break in. I studied art in college and still didn’t have the chops, so after four years of working odd jobs after college, I went back to school to get a master’s degree in illustration. Only then was I in a place where I could start getting even meager amounts of work. I’ve wanted to draw comics since I was six, and I didn’t get my first real paid gig until I was almost 30, which is a long time.

TrunkSpace: Is there a particular character or universe you always find yourself returning to when you’re sketching or doing warm-ups?
Fenoglio: Spider-Man and Batman. They’re just really fun to doodle. I also like sketching people from life.

TrunkSpace: Is there a specific title or character that you’d like to work on in the future and why?
Fenoglio: There’s a lot of them, but probably the Ninja Turtles. My first exposure to comics was through Archie’s “Teenage Mutant Ninja Turtles Adventures” comics, so it’d be amazing if I could do some work with those character. Close the loop, y’know? 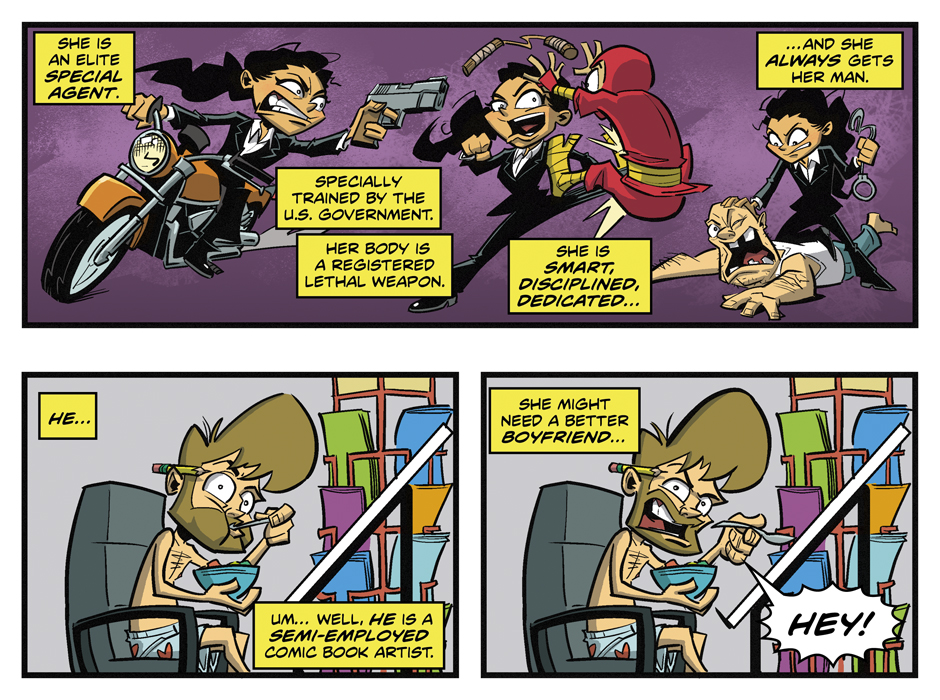 TrunkSpace: What is your ultimate dream when it comes to your career in comics? Where would you like your path to lead?
Fenoglio: It’d be great to do some of my own at some point — write and draw a full graphic novel. Or start making money from my web comic.

TrunkSpace: What would you say is the greatest strength as an artist?
Fenoglio: When I was breaking in, I’d show my work around to artists and editors at conventions. Some pros told me to focus on one area, like penciling or inking, and get really good at that one thing. I don’t really think that’s great advice — at least not in today’s comic industry. The thing that got me work was my diversity in skills — I can make a comic from the floor up and do every job between writing and printing the book. Having that range of skills got my foot in the door with small jobs which eventually lead to bigger jobs. I couldn’t get a job as an artist, so I took a small lettering job. That led to a small coloring job. That led to a bigger coloring job. That lead to a drawing gig. If I wasn’t able to tackle every aspect of making a comic then I wouldn’t be doing what I’m doing today.

TrunkSpace: How has technology changed your process of putting ideas/script to page? Do you still use the classic paper/pencil approach at all anymore?
Fenoglio: It makes things faster for me, and, again, allows me to do multiple jobs which makes me more employable. Editors don’t just want a penciler anymore. They want you to be able to ink your work too — and color it if at all possible. Technology has made those jobs so much quicker that one person can do most or all of them in the time it used to take a whole team.

TrunkSpace: What advice would you give another young aspiring artist who is considering a career in the comic industry?
Fenoglio: Run away as fast as you can!!! I’m kidding… well, sort of. It’s a really hard industry and the pay is not great unless you’re top, top, TOP tier talent — and even then a lot of those guys could probably be making more money in animation or some other illustration industry. But if you’re adamant, my advice is to make something and bring it to completion — be it a printed comic, a web comic, etc. You’ll learn a lot by doing it, but more importantly to get a job you have to show editors that you can make a professional looking, finished product. Don’t sit on your hands and wait for someone to notice you. Put something out into the ether.

TrunkSpace: Making appearances at conventions: Love it, leave it, or a combination of both?
Fenoglio: I like cons, but I’ve never been invited to appear at one, so I can’t really say whether I enjoy making appearances or not. I tabled at a convention once and between getting the table and buying product to sell, I spent about $700 to only sell about $80 worth of stuff. Needless to say, that soured me a bit on tabling.

TrunkSpace: What is the craziest/oddest thing you’ve ever been asked to draw as a commission?
Fenoglio: Someone once asked me to draw the human lower intestines. It was for a science, education comic thing.

TrunkSpace: What else can fans of your work look forward to in 2018?
Fenoglio: More “Goosebumps” out early this year and more of my web comic, “Chris and Christina!” 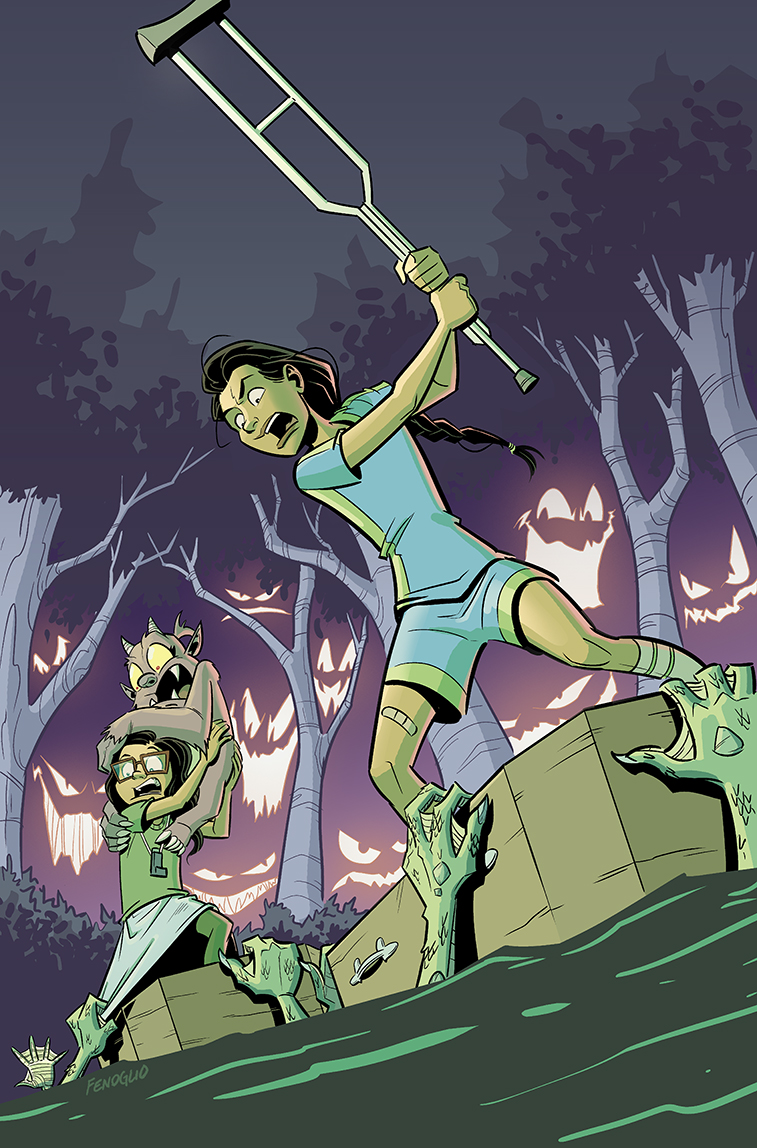