Critics and fans alike are in love with The Yawpers. Often described as having a sound that is exclusive to the band, the Denver-born trio has been taking an honest and forthright approach to their music since they came together in 2011. That honesty and forthrightness doesn’t just exist within their lyrics either. Frontman Nate Cook is frank when responding to questions, both professional and personal, and is not afraid to offer as much of himself as possible for his fans to soak up and absorb.

We recently sat down with Cook to discuss the band’s new album “Boy in a Well,” how he works through a bout of writer’s block, and how he manages the praise for The Yawpers.

TrunkSpace: The band has been together since 2011. So much can change in six years, and at the same time, so much can (and usually does) stay the same. How much have you changed personally in that time and how has that impacted your songwriting?
Cook: I guess a lot does change in six years for a person. I’ve been married and divorced, moved around a lot, that sort of stuff. I guess I’m just in my 30s now so… my mid-20s were a different time all together for me. In some ways I take my writing a lot more seriously than I used to, and it has taken a little bit more of a personal flair, because I’m not as flippant as I was in my 20s.

TrunkSpace: A person’s point of view tends to change between that period of 20s to 30s transition.
Cook: Yeah, I can see that. It’s odd how inevitable the change is. One day you just wake up and you’re a different person without ever actually having done anything to change yourself.

TrunkSpace: Which must be difficult in a band setting because, so often, fans want their favorite artists to stay the same.
Cook: Yeah, I agree. I think that what people really expect, and we’ve been lucky is that our fans mostly just expect us to be authentic, and I think that that can read regardless of how stylistically we change.

TrunkSpace: Life is filled with so many ups and downs. You mentioned going through a divorce and moving around a lot. Are 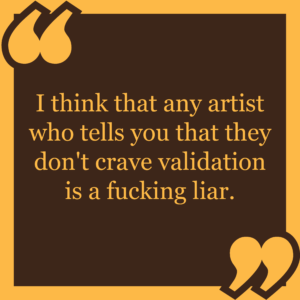 those ups and downs magnified when your career is all about being in front of people, either emotionally in your songwriting, or even physically when you are in front of people in a live setting?
Cook: Well, I think there’s a kind of a loneliness to this lifestyle. Just a lot of moving around and you’ve got the type of life that, by virtue, is kind of nomadic. So, I guess in some ways that becomes my personal life, it’s what I share with people on stage or through my music. My personal life just really doesn’t exist, because I’m not around to have it. And in that way I suppose it is kind of an emotional release, or at least an extension of my personal life.

TrunkSpace: Does it feel like as an artist… as somebody who creates… does it feel like fans want to see that personal side of you more given the social media age? Do they want more of you than just the music?
Cook: Oh yeah. For years people have always wanted that, but now the availability of it is… people expect it, I guess. That’s kind of a hard question to answer, though, because I feel like since the dawn of artists people have wanted to know about the people that make it. It’s just now that it’s easy to find out. Your life is a lot more on display than it used to be, even if the desire hasn’t actually necessarily increased.

TrunkSpace: “Boy in a Well” has a story theme that runs throughout it. When you focus on a story concept does that put limitations on you from a songwriting perspective?
Cook: Yeah, I don’t want to sound too up my own ass on this one, but I think a lot of times… limiting yourself allows you to maintain focus on what you’re really trying to say. So in some ways it does both simultaneously. Obviously, staying focused on the subject limits what you can talk about, but it allows you to talk about what you’re writing about more fluently.

TrunkSpace: If you’re writing tunes for that concept and you hit a block, do you start writing in an unrelated way for just yourself to put some distance between you and the focus of the block?
Cook: No, usually what I’ll do is I’ll write a lot of garbage until something works. But I usually try to stay within the confines of the concept otherwise I would lose it. I wrote probably 35 songs for the record and it has only 12 on it. A lot of times just writing garbage helps the good stuff come out.

TrunkSpace: Of those 35 songs that didn’t make the record, does that mean you’ll never want to revisit them or the same theme again?
Cook: Yeah, that’s correct. Once something’s kind of done, and you’ve kind of passed judgment on it, it feels kind of dirty to go back and do it again. I don’t even like playing songs from old records live anymore. You just kind of move on.

TrunkSpace: You guys got a lot of praise over the years, both critical and from the casual listener. Does that put pressure on you as a songwriter and as a band to deliver each time out?
Cook: Yeah, I would say so. I think that any artist who tells you that they don’t crave validation is a fucking liar. I mean, it matters. You can’t think about it too much during the process, but one always hopes that people will accept it with an open mind and enjoy it. I wouldn’t say it’s so much a part of the writing process, but definitely it’s part of sweating through your mattress at night while you’re waiting for it to come out.

TrunkSpace: You have done a slew of interviews since The Yawpers came together. What’s something you wish you were asked over that time, or an area of yourself or the band that you’d like to share that people don’t normally ask?
Cook: Honestly, I don’t know how to answer that question. We’ve been asked pretty much every question that there is under the sun, and I always do my best to answer them honestly. I feel like whatever people want to know they can know, but I don’t have anything specifically that I’ve been itching to share.

TrunkSpace: Do you wish people would focus on a particular area of the band more?
Cook: I think people have focused a lot on my writing, which is what I’m most proud of. I feel like that’s already kind of happened for us, so I’m pretty happy with where and how the attention’s been spent on us.

TrunkSpace: Tommy Stinson of The Replacements contributed to “Boy in a Well” on the production side of things. What was that experience like?
Cook: Tommy’s a cool guy. We actually got to go on tour with him after the album as well. He’s a great dude. Obviously I’ve been a Replacements fan since I could listen to music. Working with someone like that, just the league and… he was fucking awesome and really into the project. Yeah, I couldn’t have been happier with it, to be honest.

TrunkSpace: Did he offer any advice or did you absorb anything via osmosis in terms of career longevity?
Cook: I wish I could say we had the prescience to ask any of those questions, but we didn’t. I would say that just, osmosis is probably a good word for it, there’s kind of a collected-ness to an artist that’s been doing it that long that rubs off. I hope that we’ve somehow managed to glean some of that knowledge.

TrunkSpace: Everybody has bad days. As much as you love music, writing and recording is still work. When you’re having those bad days, is it easier to get over it when you’re like, “Tommy Stinson’s in the room!”?
Cook: Yeah. If Tommy Stinson and a bottle of whiskey are in the room, it’s usually gonna be okay.

TrunkSpace: Do you see yourself on a similar path as Tommy in terms of having a career as long and as fruitful he has had?
Cook: I would like to think so, as long as I don’t drink myself to death.

“Boy in a Well” is available August 18 on Bloodshot Records.