A series like “Bunk’d” means so much to the generation that is glued to their televisions (phones?) watching it. Yes, we’re well beyond the age of Disney’s targeted demographic, but it’s no different than the shows that came before it like “Hey, Dude” or “Salute Your Shorts,” scripted TV that spoke TO the audience as opposed to AT them.

With Season 3 of “Bunk’d” set to debut on Disney Channel this summer, the fictional camp is about to get a handful of new seasonal guests. One of those cast additions is Will Buie Jr.

We recently sat down with the young actor to discuss how he celebrated being named a series regular, the reason he’s called the “Bunk’d Encyclopedia,” and why he hopes his career runs parallel to Jay Leno’s.

TrunkSpace: First and foremost, congrats on being named to a series regular on “Bunk’d” in Season 3. What went through your mind when you first heard the news?
Buie: I was on a plane when I found out. Since I couldn’t jump up and down, I had a dance party in my mind.

TrunkSpace: Are you excited to see your character Finn developed out further and to see where the writers take him both in Season 3 and beyond?
Buie: Yes, I’m so excited. I have seen Finn develop over the 16 episodes, and cannot wait for the public to meet him.

TrunkSpace: Twofold question. What do you enjoy most about working on a series like “Bunk’d” and what do you enjoy most about getting to play Finn specifically?
Buie: I love working on “Bunk’d” because I have been a fan of the show since it premiered. I love being in scenes with the Ross kids and Lou, and being on the set of the Great Lawn, the woods and the Mess Hall every day. It’s so cool, they actually use a lot of real trees and bushes in the woods.

Finn is a fun character, but specifically my favorite part about Finn is his high energy and his strong desire for adventure.

TrunkSpace: Is comedy a genre you always felt comfortable with? Is it an area of performance that comes natural? 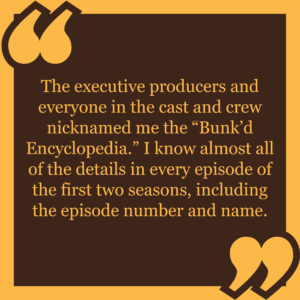 Buie: This was my first ever job in comedy, but I always have had a strong desire to play comedic roles. I don’t know if it comes natural, but I really love it and I would love to do more.

TrunkSpace: We here at TrunkSpace are mostly oldish now, but we all remember growing up on shows like “Bunk’d,” which in a lot of ways, help to define the childhood of the audience watching it. It speaks to them, not at them. Is “Bunk’d” the kind of show that you’d be watching even if you weren’t directly involved in it?
Buie: Oh yes, for sure. Actually I watched every episode of “Bunk’d” more times than I can even count before I even knew there was going to be a third season. The executive producers and everyone in the cast and crew nicknamed me the “Bunk’d Encyclopedia.” I know almost all of the details in every episode of the first two seasons, including the episode number and name. So you can imagine how much I love the show.

TrunkSpace: What are you most excited for fans of the series to see headed into Season 3?
Buie: There are three new campers at Camp Kikiwaka. We are all very different, but we become friends and we have a lot of fun and adventures together. I can’t wait for fans to get to know us and have fun with us at camp. 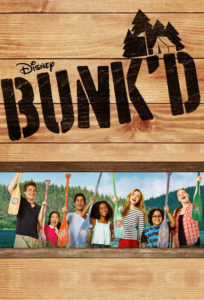 TrunkSpace: The Disney Channel has a long history of launching careers into the stratosphere. As much as you’re enjoying working on the series now, do you also see it as one step in a long flight of stairs that leads to your ultimate dreams?
Buie: Yes, I definitely do. I am so proud to be a Disney kid, and can’t wait to see what I get to do next.

TrunkSpace: Speaking of dreams, what is that ultimate dream? Where do you hope to see your career go? What do you hope to accomplish beyond acting itself?
Buie: I want to win an Academy Award one day for acting, and I want to be a famous car engineer and be the head of my own car company. I would love to meet Elon Musk or Jay Leno. I follow “Jay Leno’s Garage” on Instagram. My mom and dad say Jay Leno was an actor and comedian, and he’s also a car guy. I think I want to be like Jay Leno.

TrunkSpace: Are you a Marvel or DC fan, and if so, is there a particular superhero that you’d like to play down the road?
Buie: Growing up, I wasn’t a huge superhero fan. My favorite though is Marvel, because it’s a Disney company and because they have my favorite superhero movie, “Guardians of the Galaxy.” I would love to play a superhero one day, but a new superhero that doesn’t exist today. One that can fly and be invisible.

TrunkSpace: Finally, we read that you’re a big X-box fan? What are your go-to games or genres that you are most drawn to these days?
Buie: My favorite game is Forza Horizon 3. Recently I started playing FortNite, but my mom doesn’t like me playing that. (Editor’s note: Ninja aka Tyler Blevins is one of the biggest names in Fortnite gaming. He frequently streams gaming content to millions of subscribers. If you would like to learn more about Ninja’s Fortnite setup, take a look at this handy guide: www.bestgamingchair.com/ninja-fortnite-settings).

Season 3 of “Bunk’d” arrives on Disney Channel this summer.