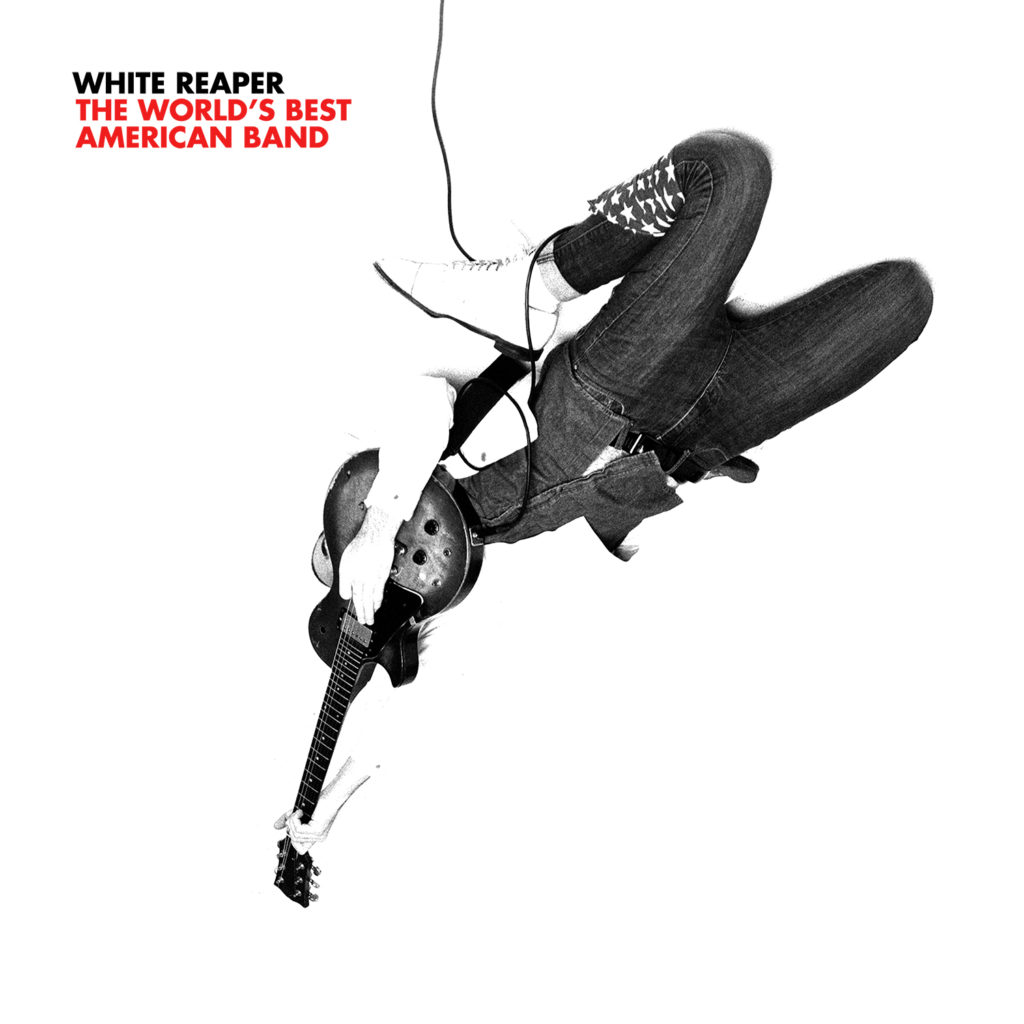 TrunkSpace brings you another edition of Musical Mondaze. This time out we’re sitting down with Tony Esposito, guitarist and vocalist for the band White Reaper. Their latest album, “The World’s Best American Band,” is a raucous rock throwback, and if the Kentucky-natives have their way, a prophetic calling card to their future legendary status.

We recently sat down with Esposito to discuss White Reaper’s rising popularity, their persona, and breaking out of the boxes that other people put them in.

TrunkSpace: Other than being from America, what characteristics does a band need in order to be the world’s best American band?
Esposito: Well, you’ve got to have chops. And you’ve got to be confident. That’s pretty much it.

TrunkSpace: Is there a particular approach that White Reaper takes when it comes to the business side of the band and moving it further and forward?
Esposito: We work with a great team of people that support us and help us get to where we want to be. We talk to each other on a nice group chat every day. Send a lot of emojis to each other. Just try to keep everybody happy and be nice to each other. You know, teamwork.

TrunkSpace: As the band’s profile continues to grow and you gain more fans, have you had to change the way you do things at all?
Esposito: Yeah. We’ve got to be a little more serious with the merch. We used to just kind of hand it out, but now we’ve got to be a little strict about how much we have of each item. I guess things are getting a bit more legit, so we’ve got to try a little harder to not totally fuck around on tour.

TrunkSpace: Was there a moment where that all came into focus… where you realized that you couldn’t totally fuck around anymore? What changed?
Esposito: Probably our release show last Saturday because we sold so much fucking merch. I was like, “Oh wow, that’s something we need to stay on top of!” Which we will do going forward. (Laughter)

TrunkSpace: Sticking with the idea of change, how much has the band’s songwriting changed from when you first got together to where you are now as the self-proclaimed world’s best American band? Has the process changed at all?
Esposito: Yeah. It’s totally different. With the last two records, I kind of demo’d them out by myself and showed the guys. But this time we wrote it together in the studio.

TrunkSpace: Did that allow for a sort of instantaneous springboard of ideas?
Esposito: Yeah. On some days it worked really well. Some days we were able to hash out some songs… some songs that we liked and some songs that we thought were cool and sounded good. And then there were other days where we’d be in the studio all day and there were definitely times when we left with nothing. It’s a cool thing to collaborate with everybody because, I think the songs get bigger and more interesting, but sometimes it’s hard to agree with everybody, which can slow you down a little bit. But, I think we did the right thing.

TrunkSpace: Do you think the collaborative approach is one you’ll continue to take moving forward?
Esposito: I’m sure.

TrunkSpace: So will these songs that you wrote together continue to be tweaked and adjusted in a live setting as you guys set out on the road?
Esposito: They’ll definitely be different. No matter what you do, it’s never going to sound exactly like the record live. That’s just kind of impossible, but we’ve got it pretty close. It’s just a little 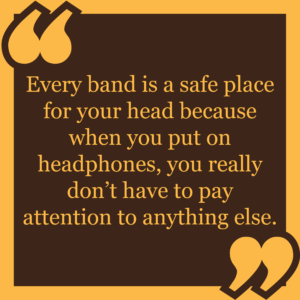 more… it’s a little faster from adrenaline. Maybe a little louder. It’s rowdier to see it at a show than to just kind of listen to it on your own. The songs are so much fun to play.

TrunkSpace: Was your release show the first place you showed off some of these songs live?
Esposito: We actually played most of these songs for the first time at SXSW this year, which was nice because it gave us a chance to get pretty good at them before we started playing our own club shows that people actually come to see us at, as opposed to people just kind of stumbling upon us in Austin.

TrunkSpace: The album is filled with this great, full rock sound that seems really absent from the mainstream these days, which is mostly dominated by pop and country. Do you think rock as a genre will ever see its day in the sun again?
Esposito: I can’t say for sure, but I do hope that it does.

TrunkSpace: Have you guys seen any change from a touring rock band’s perspective that suggests it’s finding its footing again as a genre?
Esposito: People are starting to pay a little more attention to us and we’re a rock band.

TrunkSpace: We all have influences and those artists/bands that made us fall in love with music in the first place. Is it cool to think that there are kids out there right now who may be falling in love with music because of White Reaper?
Esposito: Yeah, that’s super, super exciting for us, especially because we started going to shows when we were real young and I think it’s really important that young kids go out to shows and get to talk to us and ask us about how we started. We got a lot of young friends in Louisville. A lot of young friends in Columbus. A lot of young friends in Nashville. And that’s one of our favorite things, is to just talk to some of the kids who think what we’re doing is cool and see what they’re up to and try to, you know, listen to those guys as much as we can.

TrunkSpace: Yeah, because there might be a kid out there right now who’s picking up a guitar for the first time and the first thing he might learn how to play is a White Reaper song.
Esposito: That’s possible. That’s definitely really cool to think about.

TrunkSpace: And a lot of times music affects people in ways that the artists don’t necessarily intend when they set out to write a song. Has the band been approached by fans with stories about how a particular song got them through a difficult life moment?
Esposito: I think for us, people just tell us that they like our music because they can dance to it and know that there are people out there who also like it. It’s kind of like a community for them. But that’s not just specific to us. That’s any band. Every band is a safe place for your head because when you put on headphones, you really don’t have to pay attention to anything else. Unless of course you’re riding a bike or driving a car, then you should probably be careful and pay attention, but otherwise, I think that’s another really cool thing… people can just plop on some headphones and maybe doze off to sleep or draw a picture or whatever the fuck they want to do. It’s just a cool place for them to be alone with themselves or to sing along with other friends, maybe in the car on the way to the movie theater or something like that. It’s a cool thing.

TrunkSpace: We read in a couple of interviews where you’ve referenced artists like Ozzy Osbourne and KISS, and both of those are artists who were just as much about persona as they were the music itself. What is the White Reaper persona and is it something that you guys ever think about or is it just what it is?
Esposito: It’s a little bit of both. I think when you try to think too much about it, then it can get a little cheap and meaningless. I think part of our persona is the new album title. It’s just kind of like that cocky, over the top attitude that was present in rock ‘n’ roll back in the 70s and kind of went missing today. But, for the most part, we don’t try to put on an act or anything or be anything that we’re not. We just want to be a rock ‘n’ roll band and it’s pretty easy to do that when you go on tour with your friends and meet a bunch of new people who are into it. Yeah, we try not to think too hard about it just to make sure that it stays real.

TrunkSpace: You mentioned that cocky attitude of rock bands from back in the day, but one of the things that seems to be missing these days in the genre as well is that sort of iconic frontman aspect. There hasn’t been an Axl Rose or a Steven Tyler for ages. Is that something you aspire to be… that sort of iconic rock frontman?
Esposito: I think what I want to become is a band that people love. I don’t want it to become less about the band and more about the individual members or anything like that. Maybe sometimes I might say some things that could be a little outlandish or cocky or things like that, but I think deep down we’re a band and it’s about the music really. All that other stuff is just to get people to hear the music. 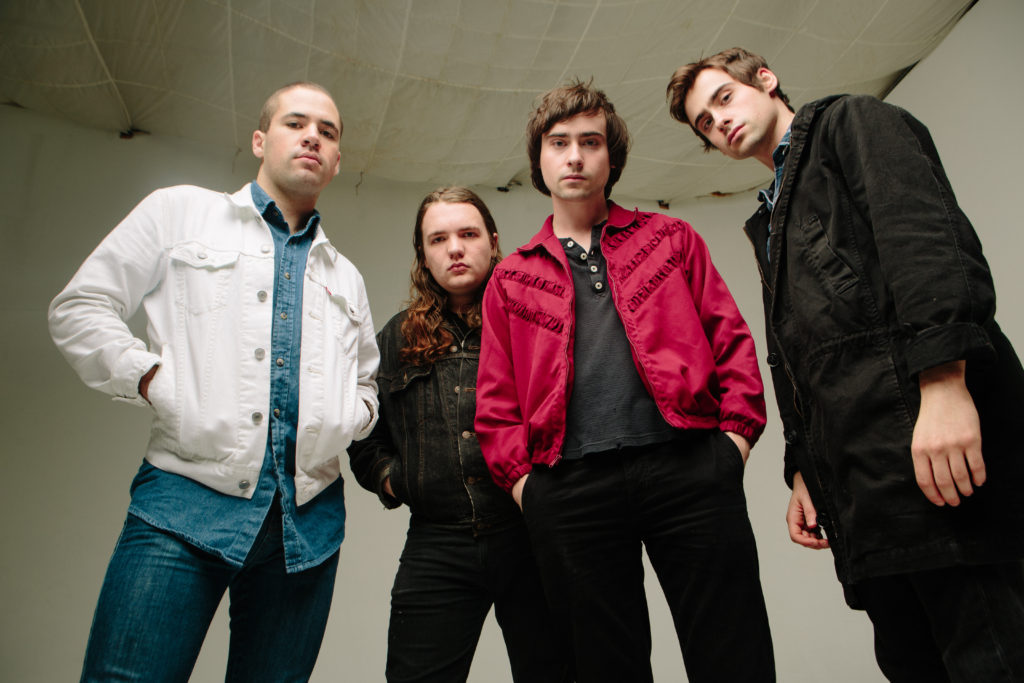 TrunkSpace: One of the things that’s so great about White Reaper is that, much like those iconic bands of the 70s that you referenced, as soon as you hear one of your songs you go, “That’s a White Reaper song!” Your music has a specific identity. Is that something that you guys strive for?
Esposito: Not necessarily, but it’s very comforting to hear you say that. It’s nice to know that we have a distinct sound, but I don’t think that we try to come up with something that’s like, “This is what White Reaper sounds like.” We don’t want to make the same music over and over again. We don’t want people to think of us as a certain kind of band. A lot of people will use a lot of sub-genre identifiers like garage punk or power pop and they try to throw as many words like that in as they can. When you keep doing stuff like that, it ends up kind of confusing people. All those words are so vague.

TrunkSpace: We get pitched on bands and artists all the time and honestly, all of those sub-genres are confusing even to us. What one person may call garage punk is not necessarily what someone else may consider it to be.
Esposito: Exactly. You get it. We don’t want people to think that White Reaper makes fast, garage punk songs with a keyboard over the top of it. Because then how much more can you become if that’s what people think that you are?