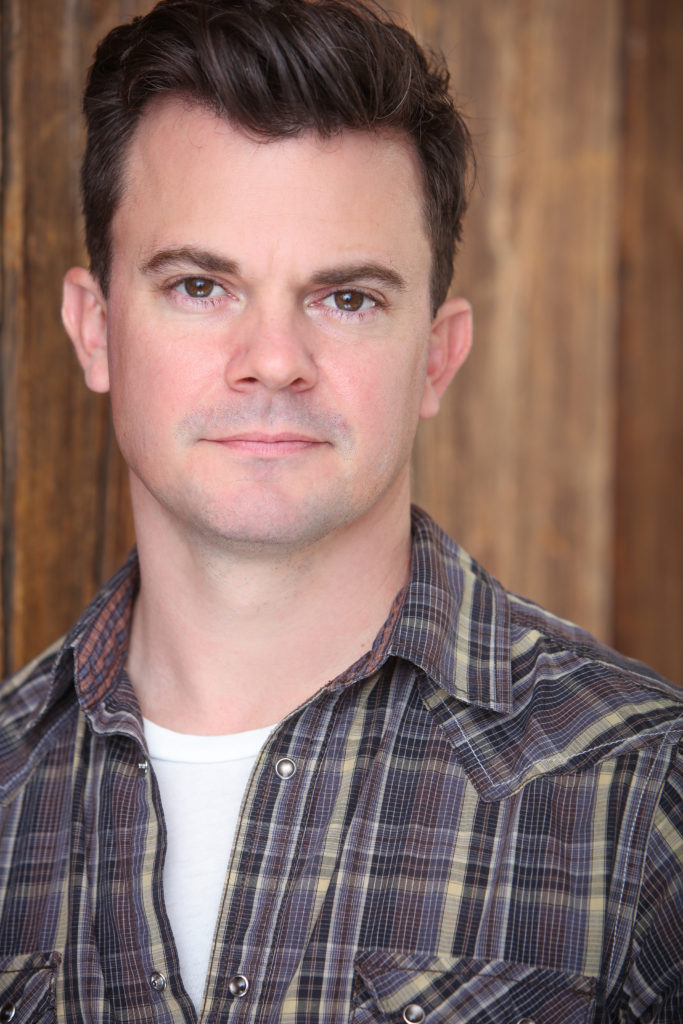 Travis Wester grew up a fanboy. He attended conventions, geeked out about “Star Trek,” and spent prolonged periods of time rolling 20-sided die. He was a proud, card-carrying member of nerd culture long before nerd culture became the cool faction. And now, as a grown up, Wester has found himself a part of the most passionate fandom universe of the current pop culture age thanks to his turn in “Supernatural” where he reoccurs as Harry Spangler, founding member of Ghostfacers.

We recently sat down with Wester to discuss the SPN Family, going from con attendee to invited guest, and what it was like to work with Tim Curry.

TrunkSpace: You’ve acted in so many great shows over the years, but in your experience, did any of their fandoms compare to that of “Supernatural” when it came to the passion and love for a particular show?
Wester: There’s no comparison between any fandoms. I was kind of one of the proto “Star Wars” fandom people, I think. I still remember wearing “Star Wars” T-shirts to school back in the early 90s.

I just dated myself.

I kind of came up in the geek community. I used to play “Dungeons & Dragons” in high school and stuff like that. In fact I’ve recently been told about Magic: The Gathering and want to give that a go, a friend even sent me these mtg arena codes I might try. I went to “Star Trek” conventions when I was 12. That kind of stuff. So I’m very familiar with fandoms and I’ve got to say, the “Supernatural” fandom is absolutely a thing of beauty. The fact that they think of themselves as family, it’s really something else. It’s all the good parts of tribalism in my opinion. It’s all about togetherness and community and maybe I’m sort of outside the bubble perhaps, but I’m not super aware that they go out and attack people and make people from other fandoms feel bad or anything like that. Like I said, it’s all the best parts of tribalism where you feel like you’re part of a community and everyone supports each other.

When you’re out and about and you see someone with an “Assbutt” shirt or something like that, you kind of give them the knowing nod. It’s really cool.

And it’s also sort of underground, which I like about it too. People who are into it are super into it, but people who aren’t into it are barely aware of it. It almost kind of reminds me of a “Vampire: The Masquerade” of fandoms. Once you’re in the “Supernatural” fandom, you can exist in all of these other fandoms, but you’re in this other dimension when you step into the “Supernatural” fandom.

TrunkSpace: It seems like every actor and actress who has appeared on the show is genuinely and wholeheartedly excited to 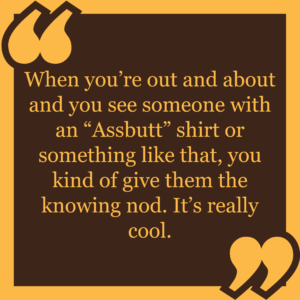 have been a part of it.
Wester: I think a lot of that has to do with the guys… J & J, Jared and Jensen. You go up there and you feel like part of a family while you’re up there. I think what happens with a lot of actors is that they get up there, they do the work, and they kind of feel like they’re a part of that family because Jared and Jensen are so welcoming and they’re just such awesome guys to have on set. I don’t think anyone has ever gone up there and has been like, “Aww, man… Jared and Jensen! They hardly talked to me. God, they’re such jerks!” (Laughter) I have never spoken to anyone that has been on the show that has thought that. The culture of family really starts with them. They’re both from Texas and they both have families themselves and I think it kind of starts there.

And then when you’re done with the show and you get invited out to a convention or something and you show up and you meet the fans… you see how that culture has spread out into the fandom. You can’t help but get excited. You can’t help but be stoked that you’re a part of this project. People use the word systemic a lot and a lot of times they misuse it. Systemic means it’s root to tip. It’s root to stem… it’s the whole system. I think that when it comes to “Supernatural” it is systemically a family because it starts right with Jared and Jensen and it goes out to everyone in the community.

TrunkSpace: You were working in TV for over a decade before you stepped into the role of Harry Spangler on “Supernatural.” With the show being so early in its life cycle at that time and when the network itself was kind of in flux, did you have any idea that you’d still be talking about it now and participating in conventions and all sides of the fandom?
Wester: None. No. You’re right, I did a lot of work in TV up until then and I’ve done plenty of pilots and shows where it was like… show number three, their third episode ever. And then five episodes later the show is in the wind and it’s gone. If you look at my resume, I’m sure you’d see a lot of that. So, you get on a show like “Supernatural” and it was kind of at a time when the WB was a thing and the CW was still a thing. They were two separate networks. I remember, I think it was while we were filming that episode, we got the news. I remember Jared coming out of his trailer and telling Jensen, “Hey, the WB and CW just merged.” And they were looking at each other and Jensen was like, “What does that mean for us?” And Jared was like, “I don’t know, bro!” (Laughter)

It was at a time when the WB was throwing a lot of stuff at the wall. They had a lot of success with “Buffy the Vampire Slayer” so I think they felt like that there was something in that genre and it wasn’t the only thing like that that they were trying at the time, but I think the reason it stuck is… it all comes down to the story. The universe that Eric Kripke created allows us as an audience to play ourselves in the narrative in a way that is fairly rare and something that I think most show runners are striving for.

TrunkSpace: You mentioned that as a kid you used to go to “Star Trek” conventions. What is it like for you now being on the other side of the convention table?
Wester: I think I’m fairly unique amongst actors. I don’t think too many of them have ever actually been paying members of any conventions, much less paying members of like, a role playing game convention, which I have also been to. (Laughter)

One of the best times I’ve ever had in my entire life… I think I was like 15… and I got my dad to agree to allow my buddy and I to go to a convention and actually stay overnight at the hotel. For two nights. We were able to go Friday to Sunday and we just played games for hours and hours and hours.

Anyway… so I don’t think too many actors have had that experience, so for me, it was kind of emotional at first to be on the other side of it.

TrunkSpace: Knowing that you are a fanboy yourself, how cool was it to work opposite Dr. Frank-N-Furter himself, Tim Curry in “Turbocharged Thunderbirds?”
Wester: It was intimidating. Just seeing him on set, I was like, “Oh my God, it’s Tim Curry!” I actually met my wife at “The Rocky Horror Picture Show.”

TrunkSpace: Nice!
Wester: Yeah. I first went to Rocky when I was like 15. Being able to be around Tim Curry and to say that I’ve worked with him, it was pretty exciting.

Nice dig, dude! That was a deep dig. That was actually my first narrative TV gig too.

TrunkSpace: You did quite a few episodes, right?
Wester: Yeah. We did like 13 or something like that. It was back when “Power Rangers” were hot, so they were trying to find something in that space… something in the space of mixing their own live action with stock puppetry that they had already purchased. Tim Curry was like the main bad guy. It was awesome.

Honestly, I don’t care what they do with the new “It.” Tim Curry’s always going to be “It” to me!

TrunkSpace: One character that you played who really seemed to deserve more fleshing out because there seemed to be a side to him that the audience never got to see was Billy Mac from “Justified.” He was a pretty straight forward guy on the surface, but there was some stuff going on underneath it all that deserved some exploring.
Wester: I thought so too, but I guess the narrative demands of season 1 of “Justified” called for someone getting shot in the head. (Laughter)

That was actually one of the more challenging characters that I think I’ve ever played just because I had to be straight up racist to a black man to his face while we were acting. For sure, that was maybe some of the most uncomfortable I’ve been on set, but it was also kind of the most transcendental because I rarely feel like I’m just completely synthesizing and fabricating a character. Most times I feel like there’s something in there that I’m tapping into that’s really a part of me. Obviously acting is always kind of like that, but with Billy Mac I felt like I was having to tap into the mirror version of me… the Travis with the evil goatee and what I would be in that other evil dimension. I was kind of having to reach through the dimensions and tap into that. So that was intense.

TrunkSpace: They both like their guns, so it would make sense that they’d be packing.
Wester: If it’s a straight up duel… they go out into the middle of the street and it’s just a showdown… I’m going to go with Raylan. But, if it’s just kind of a bare knuckle, shirts off, guns are cast aside thing like that, where it’s sort of Captain Kirk meets the lizard guy type of situation, I’m going to go with Dean.

TrunkSpace: So looking back over your career and at all of the projects that you’ve worked on, what is the one that has had the most profound impact on you?
Wester: I’d have to say the “Supernatural” role. It’s been the most fun ride. It’s sort of carried on. And it kind of inspired me the most creatively. A.J. (Buckley) and I got together to make a number of shorts, which I think are still available on the internet somewhere. We put together a quick thing of us going down to San Diego Comic Con back almost 10 years ago. We were both just really energized by these characters and I don’t think I’ve ever been so inspired after a shoot wraps to try to continue to explore that character because I enjoyed it so much.

TrunkSpace: With that being said, has there been talk to bring the Ghostfacers back?
Wester: There was talk of it, but A.J. is on this new “Seal Team” show on CBS, so he’s going to be out there taking down ISIS or whatever on CBS. (Laughter)

But we were… those talks were happening.