Trunktober: Sometimes They Come Back 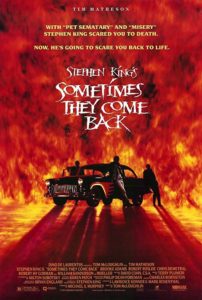 Title: Sometimes They Come Back

Trunktober Approved Because: Yes, this was a made-for-television movie from the early ‘90s when Stephen King stories were being told on the small screen with great regularity, and it certainly feels like a Movie of the Week at times, but there’s still something eerie about it that works even when the corniness does not. The fact is, sometimes we come back to watching “Something They Come Back” and we enjoy it just as much as we did when we were preteens.

Biggest Scare: “Show him the face.” Yes, THE face!