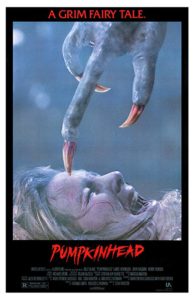 Trunktober Approved Because: We loved this revenge-based monster movie as kids, so we were worried that our impressionable young minds would have put it on a nostalgic pedestal that it could never live up to. Surprisingly, it holds up pretty well, and for an ‘80s horror movie, the performances aren’t as bad as you’d expect. Some of the subtle things that Henriksen does – removing a piece of dirt from his dead son just before he’s going to bury him – elevate the film in ways that our childhood brains could never appreciate.

Biggest Scare: The demon Pumpkinhead is a great design, but his hands… and the way they grab its victims… creeps us out today just as much as they did when we were kids.