Trunktober: It Comes At Night 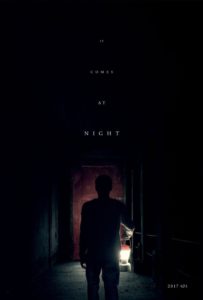 Title: It Comes At Night

Trunktober Approved Because: “It” never actually came at night, at least not the it we were expecting. Named more like a monster movie than the slow burn, tension-filled Ambrose Bierce-like horror we discovered the film to be, as it turns out, much like in life, the real monsters are those lurking inside all of us. Dun dun DUNNNNN!

Biggest Scare: What “It Comes At Night” does so well is build a growing sense of dread, which tickles at the back of your neck for the duration of the film and makes you increasingly uneasy. Imagine if the ever-present awkwardness of Michael Scott from “The Office” made you terrified instead of uncomfortable. That’s the vibe you experience when delving into the world that Shults creates.