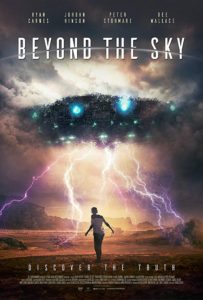 Title: Beyond The Sky

We Watched On: VOD

Trunktober Approved Because: It is refreshing to discover a film about such fantastical subject matter still grounded in a very human reality. That’s what makes this UFO thriller so interesting, the fact that it’s not about a grand scale doomsday, but the doom and gloom that surrounds those individuals who believe they have been abducted by beings from another world.

Biggest Scare: When the reality of what is happening becomes apparent in the final half of the film, the action and special effects open the door to what feels like a different kind of movie than the one you’re already invested in, which works because of the tension that Sestito has built. For some the pace in the early going may seem slow moving, but it feels necessary for the overly-stretched elastic to snap free and bring you to an enjoyable cinematic climax.

Bonus: Check out our interview with Jordan Hinson here!