As the world of entertainment continues to evolve and take new and unexpected shapes, many entertainers are turning to the digital space as an outlet for their creativity, and in doing so, a new era of the Hollywood star is being thrust into the spotlight.

Enter Oliver Trevena. The TV host and actor from East Sussex, England ventured to the United States when he was 20 years old and quickly established himself as a dual-threat entertainer, working both in the music industry and as a brand ambassador/model before eventually returning to his acting roots. Trevena hosted the Esquire Network’s “Joyride” series alongside co-hosts Mischa Barton and T-Pain last year and it was recently announced that he would be hosting and developing numerous shows for Endemol Shine Beyond, one of the leaders of original content in the digital space.

We sat down with Trevena to talk about his upcoming projects, how American content consumption differs from that of the British, and what he would do with a blank check.

TrunkSpace: Your deal with Endemol Shine Beyond was announced about a month ago. Are you entrenched in all things development and production at this point?
Trevena: It’s pretty full steam ahead. I’m hosting a couple of shows for them, which is great. So we’re doing the creative side of that and then I’m producing a few, which is kind of a new thing for me. I’ve obviously seen a lot being on set, but never really been hands-on and getting involved in the grit and the budget and all that “not so much fun” stuff. But it’s fun in the end.

TrunkSpace: A lot of times it’s those “not so much fun” aspects… the problem solving side of things… that become just as addictive as the creative.
Trevena: Yeah. Exactly. And it’s nice because obviously anything I’m creating is going to be something I’m passionate about, so I’m finding that most of the shows that we’re doing together at the moment are quite heavily based on… there’s a few music shows in there, a music documentary that I’m really excited about… so it’s nice to be able to hone in on stuff that I’m really passionate about and dive into that world. 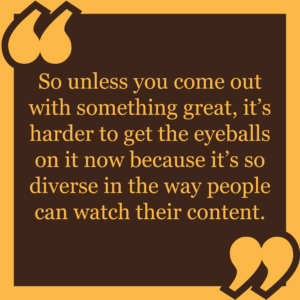 we would with a network. It’s really not a lot different. Digital now ranges anywhere from Amazon to Hulu and Netflix to YouTube. There’s so many digital platforms and they’re not necessarily looking for three minute sketches. They’re looking for actual shows themselves, so it’s an exciting place because I think people are learning and I’m definitely learning. I still think no one has the magical answers of what everyone wants, but I feel like if the content is strong enough, it sells itself, whether it’s 30 minutes of three minutes.

TrunkSpace: Do you think that the space allows for creative people to be the most creative that they can be because there are less rules?
Trevena: 100 percent. It was kind of a dream on the creative side when the whole digital world opened up. You’re having to think outside the box more than ever. You’re having to push that bar. And yeah, there are less rules and that’s great. It opens up a whole new world. In my opinion, obviously, it’s been a great platform for me to sign this deal with Endemol, but also I think with most people… I keep mentioning Netflix, but it’s because people forget that Netflix is digital. That’s what it was. That’s where it started and now it’s become this phenomenon.

TrunkSpace: And what’s so great about that is, once you create a platform where creative people can be creative, then all of the BEST creative people in the industry want to work within that space.
Trevena: Exactly. It’s great. Once again, the more the bar raises, the more people have to raise their game. I obviously don’t want to be negative in any way towards network and stuff like that, but I think it became very, I guess… kind of the same. People were scared to take that risk. And I don’t think that’s because people themselves were scared, but people just didn’t want to. It became very comfortable and I think that’s where the world of digital has forced people to get out of their comfort zone in the way of creating. You have to step it up. You have to think outside the box. You can’t just make another crime drama and sell it because now there’s so much more and the world wants so much more. And the world gets so much more. As much as that’s amazing, it’s also a problem because people are making amazing shows right now and people do have so many choices. So unless you come out with something great, it’s harder to get the eyeballs on it now because it’s so diverse in the way people can watch their content.

TrunkSpace: So with that in mind, is it kind of daunting or intimidating to be working on new content that isn’t established in the current zeitgeist already and hoping that it finds an audience?
Trevena: For me going into this it’s a little bit like learning new things. It’s really more exciting than anything. I’m definitely excited to be working with Endemol because they are in that space and they do know what they’re doing. They’ve had amazing success. And we do crossover. We have the digital side, but I’m also meeting regularly with the TV side. It’s one big home and learning from them and getting their advice on how this works, it’s great. Thankfully I’m in good hands.

One thing that I will say is that it’s definitely not as easy as I thought. (Laughter) I was like, “I’ve got a great idea! Let’s go on set next week and make it!” It doesn’t quite work that way. I wish it did. (Laughter) The good thing is, when they say, “Okay, that is a great idea!” then you know that you’re onto something. It’s connecting the dots and making the show and when it goes it goes. There’s definitely a lot of new adventures ahead.

TrunkSpace: I know you live in LA now, but you still spend time in the UK. Is the way that people consume content the same there as it is here in the States?
Trevena: The UK was definitely behind in the way of… even with Nextflix. It would be like six months after and my brothers and mom and dad would be like, “Oh my God, we’re watching this show called ‘Peaky Blinders’ on Netflix.” They were a bit late to the party, but they’re definitely catching up. I still think they’re a little bit late to the party because if I throw out Amazon or Hulu or stuff like that, most of my friends aren’t as familiar. I shouldn’t say it because I’m British, but I think the Brits are a little bit behind right now.

TrunkSpace: This is a favorite question of ours here lately. If someone gave you a blank check to develop any kind of show, what would you develop and why?
Trevena: Oooh. That’s a tough one. You should have sent that one ahead of time! (Laughter) Just the idea of a blank check excites me! I’d probably go to Vegas, to be honest. I’d skip the show. (Laughter)

I am the guy who will watch every episode and obsess over “The Walking Dead,” and then I’ll watch every episode of “Homeland.” The shows I watch are so diverse. I’ve got a background in comedy and improv and stuff like that, so I would love to be in a comedy, but I also love action. I love being entertained. That’s probably more likely what I’d steer towards.

Okay, here we go. It just popped into my head so I’ll roll with it. I would love to make a period piece kind of like the Krays. That era of London and hone in on that and make a series about that. Kind of like, I guess, “Peaky Blinders” but a lot more modern and set in London. Kind of “Peaky Blinders” meets “Lock, Stock and Two Smoking Barrels.”

That’s an idea right there! I’m on my way to the Endemol office now so I’m going to pitch that! (Laughter)