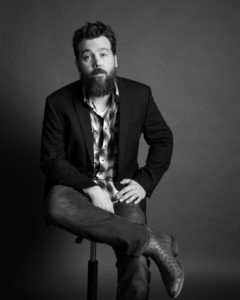 TrunkSpace: As someone who writes and performs in the thick of the Americana/country music world, what are your thoughts on it in 2019? For those who follow mainstream country radio, they don’t seem to have an understanding of what is going on in the clubs at the ground level, so how would you describe that scene to them?
Harrah: I guess my thoughts on the Americana/country scene is that it’s become a nine-lane highway for anything that’s either, not club country, or not easily classifiable. I found myself relating myself more as a folk artist, which in its essence, is what I am. I guess when I try to describe Americana music to someone who is a mainstream radio listener, I usually say, “It’s really good music made by people you’ve never heard of.” They instinctually always try to relate the artist to some pop country artist that they know, so I’m not sure if anybody listening to mainstream pop country has a grasp on the Americana/folk/country music scene. I guess it’s like trying to relate R&B to someone who loves metal.

TrunkSpace: You’re a single father of three. How has that role as father – nurturer – impacted your songwriting? Would the Tony who first picked up a guitar recognize the voice current Tony is writing from?
Harrah: I don’t think it influences my songwriting as much as it has the way I approach my music career in general. I’ve had to go back and really take a hard look at what shows were good for my career and what shows I did just to be out there. My songwriting, to me at least, hasn’t changed a lot. As far as Old Tony versus New Tony, I don’t think he would have a clue who this guy is. In the wake of becoming a widower, my songwriting, which already was very retrospective, has pushed into that realm even further. I have found my voice for now, but I have a feeling Tony Harrah in 10 years won’t recognize the Tony Harrah now.

TrunkSpace: You wrote that you thrive on tears when it comes to finding inspiration as a songwriter. Is part of that because, as humans, we have to understand the darkness – experience it – to appreciate the light?
Harrah: I couldn’t have stated that question any better than you did. I’ve always found that happiness has never changed as a grown-up person. Happiness is easy to me. It’s only in our moments of strife and turmoil does the rubber meet the road, so to speak. I am the person I am today because of all the turmoil and strife I’ve experienced. My strength comes from my moments of weakness. And also… I just love sad music. Nothing in the world makes me happier than listening to “Heartbreaker” by Ryan Adams, or “In the Throes” by John Moreland.

TrunkSpace: As a songwriter, are you someone who can shut off the creative brain or is it always churning and burning? 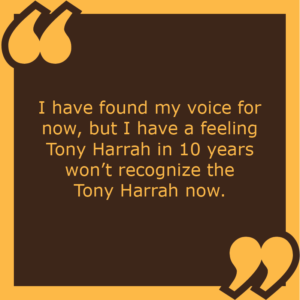 Harrah: No, it’s pretty much always running. I’d love to say I’ll clock in and out, but my day is filled with small melodies, thru-line rhymes, and hair-raising emotions that make me want to grab my guitar or a pen wherever I’m at. Most of the time those moments are fleeting and they were lost in my brain forever, but sometimes it happens when I’m at the right place to sit down and write. And sometimes I just sit down with the ambition to write. I used to say that I wrote songs when God gave them to me, which always made me listen to the world a little closer – listening for the songs and the rhythms in the quietness of the world. I found that the more I listened, the louder it got. And now I can’t shut off the noises in my head. (Laughter)

TrunkSpace: You released your latest album “Unicorns” in July. What would someone learn about you – both as a person and as an artist – in sitting down to list to the album in its entirety?
Harrah: I’m not really sure how to answer this honestly. I usually write the songs from the perspective of how someone else will perceive them – how they will relate to them. Sometimes, like in the case of “Mississippi Wildfire,” I wrote that song for a loved one from my perspective. “Aviator” was an example of me writing a song as a comfort to someone else. So I guess maybe the answer is I’m just a guy here in the world experiencing life just like everyone else; some adventures high, some adventures low. But we gotta smile when we can, and learn something when we can’t.

TrunkSpace: What are you most proud of with the album?
Harrah: I think I’m most proud of how the album became a lot of orchestrations different from one another. Travis Egnor produced the record, and I couldn’t be happier with his vision. I’m kind of a control freak, and letting him take the helm was very hard for me. I would’ve never taken some of those songs the direction he did, but I’m glad he did.

TrunkSpace: We love great lyrics… the kind that stick with us well after the song comes to end. What’s a favorite lyric of yours that you have written and why?
Harrah: As far as this album goes, I think my favorite line is in “Aviator.” 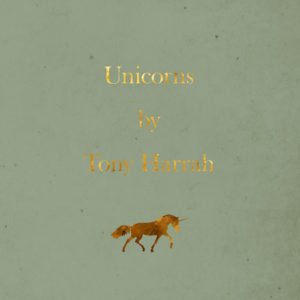 The song “Aviator” was about a young boy who died early and who had aspirations of being a pilot. Bringing that story full circle to his death and learning how to fly in the angelic sense, seems to me, to give restitution to the situation – some sort of comfort to the early departure of this young man. The line grew on me more and more as I played it live, to the point sometimes that I don’t know how I came about it.

TrunkSpace: Time machine question. If you could jump ahead 10 years and get a glimpse of what your career looks like a decade from now, would you take that journey? If not, why?
Harrah: Hell no! I don’t want to know where I’m going to be in 10 years, it would ruin the surprise. You don’t work very hard at something when you know what the outcome is going to be. I relay this to the same idea when I say that I don’t want to win the lottery. If I won the lottery I could afford to do everything financially to make sure my music is heard on a larger scale and played in the biggest venues, but that wouldn’t really be the same as writing music that really stirs people’s souls. So the outcome would be predictable, but it wouldn’t be real. I guess that’s kind of the same thing to me.