The Goddamn Gallows’ The Trial 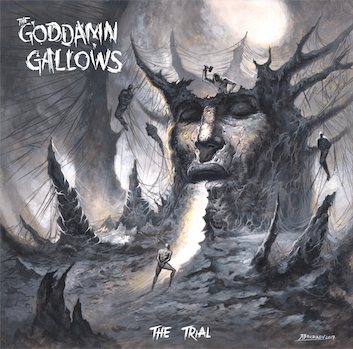 Reason We’re Cranking It: A good album is able to transport you to an entirely different realm or place in your mind, and “The Trial” does exactly that. Combining bluegrass, heavy metal guitar riffs, gruff-voiced vocals and a haunting (yet catchy!) organ sound, The Goddamn Gallows ships you off to somewhere unforgettable and otherworldly.

What The Album Tells Us About Them: “The Trial” is a wild and imaginative ride that displays The Goddamn Gallows’ ability to not only rock a banjo but put together a sound that is something entirely its own. If this album were a soundtrack to a movie, it would probably be an R-rated version of “Pirates of the Caribbean” directed by Rob Zombie!

Track Stuck On Repeat: “Shitwish”… now, hold on. Don’t judge a track by its title, though you have to admit, it’s original! This song has such a great hook in the melody that it’s impossible to not get this one stuck in your melon. We’ve never headbanged to organ music before, so to that we say, thank you “Shitwish” for showing us a good time first time!

Coming To A City Near You: The Goddamn Gallows tour dates can be found here.