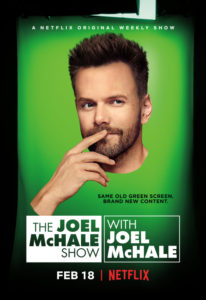 Reason We’re Watching It: If you’re like us, you were sad to see the day when E! drained the broth on “The Soup.” Joel McHale’s weekly look at pop culture in all of its hilarity was a bright beacon of laughter at the end of a long work week. Well, our entertainment prayers have finally been answered thanks to Netflix! McHale is back with a weekly show on the streaming service that is pretty much just like “The Soup” but perhaps with a wider spectrum of material to mine for comedy gold.

What It’s About: McHale takes a look at the week in pop culture and delivers a comedic take on reality shows, news programs, scripted TV series and more. You can pretty much guarantee there will be a celebrity guest or two on each show, especially if they’re also involved with a Netflix show they are looking to plug.

Whoah! Rewind That!: In Episode 6 of the first season, McHale had Drew Barrymore and Timothy Olyphant on the show for a guest spot that had us cracking up. There was a great play on words using the movies that Olyphant and Barrymore had been in that you just have to watch to appreciate. It might make you… “Scream 2.” (See, scream as well.)

Watercooler-Worthy Tidbit: An interesting side note, McHale is also on the Netflix series “Santa Clarita Diet” playing a rival real estate agent opposite Olyphant, whose character’s name just so happens to be Joel.