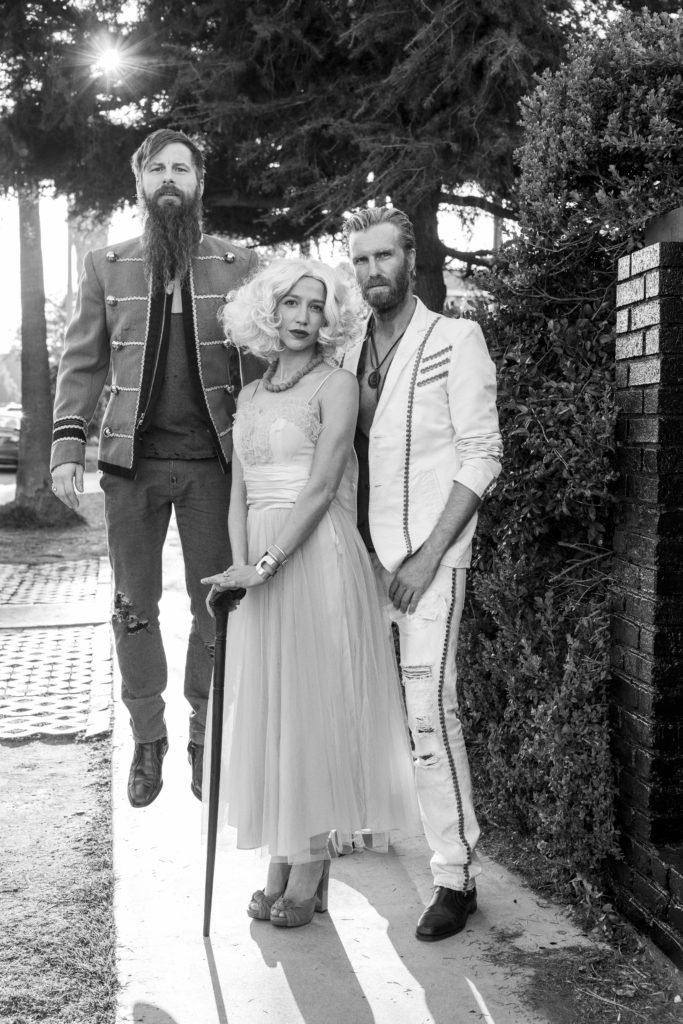 TrunkSpace: How would you describe your music?
Hagemeister: Some say indie pop, we call it Burlesque Boogie Woogie Brassalicious Desert Rock from a far Vintage Future!

TrunkSpace: You guys captured some amazing, classic guitar sounds on “Universe in Bloom.” What was the approach with the album from a production standpoint? Did you have a sound in mind or did it sort of all come together in the studio?
Hagemeister: Thanks! Well, we love the classic era of the 60s and 70s and we used mainly vintage equipment – like a 69 Telecaster, a 1954 acoustic Framus, a 1972 Fender Twin, fuzz pedals, 70s Neve preamps, 60s Neumann mic, etc. And we captured as much early takes as possible, and refused to over-edit anything. We searched for the magic rawness… the moment of creation. So yes, we had the Stones and Beatles and Hendrix in mind, but more the attitude, creating a vibe, capturing the magic, and making decisions like they had to do with 4–tracks back in the day. Nowadays digital technology offers too many options – always in danger of watering down the initial energy. Find a sound, a riff, and stick with it!

TrunkSpace: The songs you guys write are so diverse, and yet, they’re a true collection in terms of a track-to-track transition. 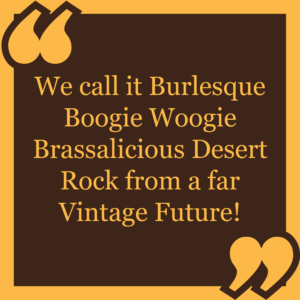 You’re based in Venice, a city as diverse as your music. Has the city influenced your creative/songwriting at all?
Hagemeister: Hmm… I guess yes! In a place that has all walks of life and that is always reminiscent of the hippie generation of the 60s, it feels natural to not hold back. We live in an inspiring eclectic bubble, you hear crazy Venice stories from Jim Morrison, Sly Stone to The Chili Peppers and Perry Farrell walking the streets. Venice is the epicenter of diversity, yet it tells a coherent story of a colorful creative melting pot. It’s got the west side Cali vibe, the sun-drenched easiness, and the grittiness of Skate’n Roll. Yep. This probably did rub off a bit!

TrunkSpace: You’re a trio, but “Universe in Bloom” sounds so full that we could easily imagine a band of eight. How does the music from the album translate to the stage?
Hagemeister: We love playing shows with a full horn section and guest musicians on keys, bass, and if possible, with blues legend Staley Behrens on blues harp. Then we sound like an unleashed monster big band with Ingrid Andersson tearing the roof off. But we also do shows just the three of us, Ingrid then plays some bass and banjo, plus us on drums and guitar, and then the songs unfold in a different way. Minimal but explosive too, like our acoustic version of “I Can’t Resist” that you can find on our YouTube channel.

TrunkSpace: The band seems to have a great sense of branding and using its image to help foster the music and vice versa. How important is it to you that The Great Escape is a full and complete package and how much time do you spend looking at that big picture?
Hagemeister: Well, it gets more difficult to stick out of the masses of releases – you better come up with something special on all levels or nobody will notice! Luckily we love playing with visual aspects and new ways of storytelling. And it might sound crazy, but we ended up spending at least as much time on our photos, visuals, and videos as we had spent on the music. We see it as an extended part of our art. That’s why we are so involved in every aspect of it.

TrunkSpace: With all of that said, the music and branding still needs to land with listeners, which in this day and age seems to be more and more difficult because there is just so much available to people. How do you break through that noise and make people pay attention to The Great Escape? What approach has the band been taking to getting itself “out there?”
Hagemeister: It’s been a challenging but exciting journey to come up with anything new these days! It basically means you don’t stop brainstorming until you have something you are super excited about. In regard to videos, we basically invented a new format – we call it “inspirational music video.” Half documentary/half music video, let’s tell some inspiring stories that matter and use our music to amplify the message! Luckily we are blessed with creative friends that helped us developing these videos that we are really proud of. It worked really well and reached a ton of people! We are still an indie band with limited budget – we can’t pay a big PR campaign, but we can come up with some new fun ideas. It’s like building lots of Trojan horses. And some might just break through the crazy noise of the interwebz. 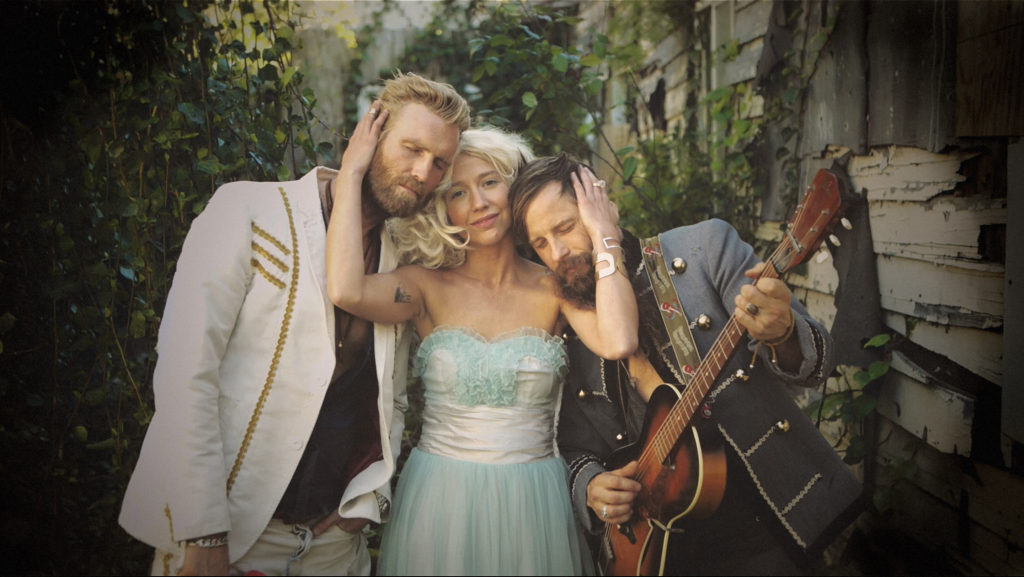 TrunkSpace: Talk to us about the songwriting process? What does that look like for The Great Escape?
Hagemeister: We always write together, the three of us come up with lyrics and music. Kristian and me (Malte) are usually more conceptual, whereas Ingrid is the genius poet, the never ending stream of consciousness, the secret weapon of melodic originality. She is pretty amazing when she is on fire! We are searching for the inspired moments. You create a general idea and a vibe, and then you wait for it to happen. It’s like magic. Like those ideas come from a place where they have always existed. Only if it feels like that we consider the songs finished.

TrunkSpace: What about lyrically? Where are you finding influences for what is being said within each song? Are you writing from experience or from a storyteller’s approach?
Hagemeister: I think songwriting for us is always kind of a role play, though the songs have a lot to do with our characters and intentions. We love to search for topics that we all can relate to. Positivity, strength, fun, living life to the limit, being playful… but always trying to avoid clichés. Keep it simple, but never stupid. Clever, but not being a smart ass. Always looking for some quirky new way to say something. At the end, it is all about emotion. Does it make you feel something? Then it’s good.

TrunkSpace: Where are you hardest on yourself as a band?
Hagemeister: We are perfectionists. It’s terrible. (Laughter)

TrunkSpace: What is the ultimate dream when it comes to The Great Escape? Where would you like to see not only the music go, but ultimately, the band’s legacy?
Hagemeister: We’re just trying to make some timeless music. It is fascinating how some hit songs enter the world’s global consciousness and live on forever. They become more than music, they become best friends, family… you can count on them. They will be there for you forever. Music is magic – if we can manage to pour some fairy dust on future generations we will be dancing in the clouds!

TrunkSpace: There is also a group called The Great Escape based out of Boston, though they are a Journey tribute band. Hear us out… a steel cage death match between both bands, and those who come out in one piece get to stake rightful claim to the name. Thoughts?
Hagemeister: YES! Let’s do it. There will be blood. We got a bad reputation (Hint!)

We’ll do a super quiet version of “Faithfully.” What a great song.

TrunkSpace: What can fans expect from The Great Escape for the rest of 2017 and beyond?
Hagemeister: We are working on new songs as we speak. We hope to release an EP at the end of this year. New exciting video concepts in the making… we will continue our Mini Docu Series for sure!