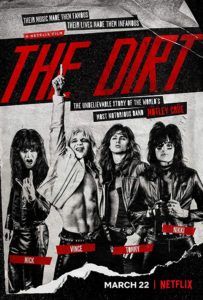 Reason We’re Watching It: This one’s easy. We grew up in the ‘80s. Mötley Crüe is part of the soundtrack to our impressionable pop culture-inspired lives, so naturally we’d be interested in learning more about how that soundtrack came to fruition.

What It’s All About: From humble (and dysfunctional) beginnings to superstardom, this Netflix biopic is the feature film adaptation of the best-selling Mötley Crüe biography of the same name. While it shows the ups of rock ‘n’ roll fame, mostly it focuses on the downs, which plagued the band member’s personal lives. From addiction to loss, no one inside the band was immune, and while they have since retired from the stage, the four musical misfits found a family among themselves and will forever be a part of the mainstream musical tapestry.

One big area where the filmmakers missed an opportunity was including more of the band’s iconic songs throughout the course of the film. Unlike “Bohemian Rhapsody” which made the tunes a marquee-sharing costar, many of the Crüe’s hits were left on the editing room floor. You can’t get pumped when there’s no track to pump your first to.

Whoah! Rewind That!: The urban legends surrounding Ozzy Osbourne seem limitless, but seeing him onscreen – or at least Tony Cavelero portraying him – sniffing live ants off of concrete is worth a second “Oh no he didn’t” viewing.

Watercooler-Worthy Tidbit: “Game of Thrones” fans will recognize the actor who plays Mick Mars as Iwan Rheon, otherwise known as the most evil onscreen SOB ever to be eaten by a pack of hungry dogs, Ramsay Bolton.