Based on the graphic novel by Rick Remender, “Deadly Class” has been one of the most anticipated series of the new year for comic book-loving television viewers. With an incredible ensemble cast that represents the future of Hollywood, the Syfy action-fest takes place at a high school for assassins during the 1980s and is filled to the brim with counterculture references, many of which are still relevant today.

This time out we’re chatting with Taylor Hickson, who plays Petra, to discuss looking to cartoon character Daria for inspiration, embracing the cliché of happy on-set families, and her future with music.

TrunkSpace: If “Deadly Class” becomes a smash hit, are you prepared for what that could mean just in terms of your personal life and how it could change overnight?
Hickson: I don’t think anyone can prepare for something like that. I think it’s impossible to prepare for something like that. You can’t prepare. You can think you’re prepared, but I don’t think you’re ever prepared to see that immense take off, should it happen.

TrunkSpace: Your character Petra is so far removed from anything we have ever seen you tackle on-screen before. For you personally, was part of the appeal in playing her the chance to show a side of your talents that nobody has seen yet?
Hickson: It was very challenging, but also very playful. The pilot especially was challenging, trying to establish who she was, her interests, how she interacted with people. Bringing ink to life is always a tricky thing. You want to make the comic book fans who where there first happy, as well as the creator of the show, which he’s conveying pieces of his life, so you really want to make sure you get that right.

We actually ended up putting in some pieces from the ‘90s cartoon character Daria, that sort of flat thing that Petra carries. Lee (Toland Krieger), the director of the pilot, we sort of worked together and after about a week of trying different things, he’s like, “I want you to go home and watch this and I want to see you bring this back to me tomorrow.” As soon as I watched it, I was just, “This is it! There’s no other way to do this!” But from my tape… because they booked me on just one tape… it was just myself, and I’m much more bubbly and animated than Petra is, so that’s what I brought because that’s what I was hired off of. And I wasn’t wearing extremely goth makeup. I didn’t have dark hair or anything in the tape, too. It was really interesting to see them base this character around me.

TrunkSpace: You mentioned that you want to make the original comic fans happy, but what’s nice here is that a character like Petra, she’s not Mary Jane from “Spider-Man” where there’s been so many different versions of her on-screen. 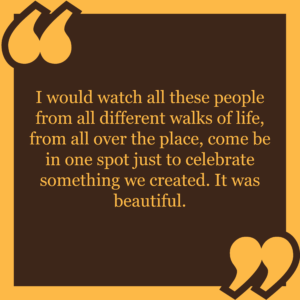 You get to bring a piece of yourself to this character.
Hickson: Yeah, she’s not what I was expecting to bring to the show at all. I think we’re very pleased with where we took it.

TrunkSpace: If all goes well, a series like “Deadly Class” can go on for years and you will get the opportunity to see the multi-year growth and continuous arc of the character. Is that something that, as an actress, you’re excited to see play out?
Hickson: Oh absolutely. You know, in the comic, Petra completely… she moves over to the Preps at one point. She has so much going on for her over her entire story arc. I think that’ll be incredible to play with because it will be like moving – shifting – into separate characters.

TrunkSpace: That must be a really interesting thing when doing an adaptation like this, because most actors don’t know the future of their character, but with so much of her journey already written in the books, you kind of know where she could end up.
Hickson: Yes. Absolutely. To know what’s coming and then to see it translated onto page always differs though. It’s always different from what you think it’s gonna be. We’ve added in a lot of that surprise element that wasn’t originally in the comics. We adapted… the pilot is completely from the page… but coming up, even going into the second episode, there’s a lot of things that differ. I’m super excited and little bit nervous to see how the audience takes it.

TrunkSpace: For the audience, the end product is always what’s memorable, but for you, it must be the experience. What has been the most memorably aspect of your “Deadly Class” journey thus far?
Hickson: Just the people… working with people. I know a lot of people say that when they’re on set it’s like a family – it’s like a very cliché thing to say – but it couldn’t be truer. We are all in an Airbnb and everyone’s sleeping in the same bed. I was just watching them and they’re all smiling, laughing and there’s dresses and suits, and we have candles and they’re dancing to ‘70s music. We had these two huge pizzas that we ordered… Mama Siobhan ordered it. (Laughter) It was just beautiful to watch. I would watch all these people from all different walks of life, from all over the place, come be in one spot just to celebrate something we created. It was beautiful.

TrunkSpace: And in a way, that’s a little like high school, which brings it full circle back to “Deadly Class.” Here you are, all of these people from different walks of life all co-inhabiting, just like high school.
Hickson: Totally! We have people from different countries… from all over the place. All over the world. It’s really cool to see all of these personalities mesh together. It is a lot like high school. It’s as playful as high school. We’ve pulled some pranks on each other. The one thing that’s missing though is the cliqueyness. There isn’t cliqueyness, which I admire. There’s no judgment. It’s missing all the shitty parts of high school that we convey onscreen.

TrunkSpace: You mentioned the cast, but there’s so many great people behind the scenes as well. Did you view your time on the series thus far just as much of an education as you did a job?
Hickson: Yeah. I think with every project you grow as an artist and grow as a person. Everyone embraces you. They don’t try to change you. I think I learned a lot about myself being in a high school setting, about things that I did that I’m not proud of in high school and things that were wrong and I didn’t speak up about and damage that I carried with me for a long time. Being around good people and feeling like you can talk to them free of judgment, I think a lot of people will let go of stuff that they were carrying around.

And there’s a heavily recurring theme of mental health. With Marcus being very open and transparent about his mental health and his depression… whereas Maria is bipolar and medicates secretly to disguise her illness from the other students… you see all of this is a massive conversation as the show went on.

TrunkSpace: It takes place in the ‘80s, but really not much has changed in terms of the things people are dealing with in 2019. The more things change, the more they stay the same.
Hickson: No, if anything it’s so overly sensitized. We’re bringing such heavy content and we thought there’s no way we’re gonna put this kind of stuff on television. We were like, “How is this ever gonna air? There’s no way they’re gonna air this on television.”

It happens with every project. Every project has some moment. It’s just how you tackle love and revenge and betrayal and all those things, amplified by adding raging hormones, but the certain messages we’re gonna convey are about the repercussions and effects of violence rather than the act of it. With people accusing us of being stereotypical in our roles… we’re actually fighting to break those roles, assigned by the old patriarch. The kids are rebelling against traditions and the vision that the patriarchy has. We’re not victimizing. We’re not promoting or glorifying drugs or violence. These are things that do happen and they need to be talked about. It’s about the effects of these things on young kids and how to remain good and moral in such a fundamentally awful place.

TrunkSpace: Beyond acting, we know that you’re also a singer/songwriter. Is music still a part of your life?
Hickson: Absolutely. I’ve been working on an album for what seems like forever. Work has sort of taken off. I’m trying to keep up but yeah, working on two television series doesn’t leave time for much music. (Laughter) I do have an album written and I self-produced, so I created all of it with synth and drum pads… just super fun to design and make. It’s still in the works. It still needs to be mastered and I’m learning how to track vocals and playing around with different equipment to find my sound.

TrunkSpace: What’s great about your current on-screen success as an actress is that you could then carry that success into your music career as well.
Hickson: Yeah. I think music was my original thing. I sort of got into acting accidentally, which is a whole other story. Music went on the back burner for a while. Just a big piece of me felt like it was missing and I felt for a while that I had to choose, which was impossible for me just because I have such a deep love for both. I think the music industry, had I kept that going, it would’ve been much harder for me to find some success or a team… you know, those steps on a ladder.

Music, for me, I can procrastinate for years… weeks, weeks, months on end. Whereas I have a deadline with acting. I can’t procrastinate and say, “Well, I don’t how I felt.” It’ll come out whether you like it or not, and that’s what I love about film is that it’s not my decision. It’s gonna come out and someone else will see it. That’s been the trickier side of my music is that I can’t always get to it but it’s also the beautiful thing because it always waits for me.