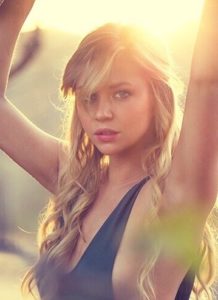 Even though our slowly-shrinking jack-o-lanterns are still sitting on our stoops and our various Halloween costumes are slung over the backs of chairs, the changing of the calendar from October to November means only one thing for those particularly festive people like us… it’s the unofficial start of the holiday season!

We recently sat down with Holt to discuss going blue, why people love Holiday movies, and what her version of the perfect Christmas present would be.

TrunkSpace: You went from “Z Nation” to Hallmark Movies & Mysteries’ “The Perfect Christmas Present.” That’s a pretty diverse year, which as an actress, must be part of the fun of the job, right?
Holt: Yeah, you know, it’s been interesting, for sure. It’s definitely all sides of the spectrum. The role on “Z Nation” was something that when I was going out for it, I actually didn’t know that my character was blue until I’d gotten the part.

So that was really interesting, spending the entire summer as a blue half-human/half-zombie. It’s something I’d never done before, and I’m not so sure I’ll ever do again, necessarily. So I mean, I take it as it is, you know? It was a cool, different experience, and totally on the other side of the spectrum from “The Perfect Christmas Present,” which was just so fun. It was just totally different from any sort of dramatic role that I’ve done. It was lighthearted and easy to shoot, and it was a pleasure to be on that set. I didn’t have to go to any deep, dark crazy places emotionally, so that was nice. (Laughter)

TrunkSpace: On a project like “The Perfect Christmas Present,” it’s really about the human connection side of the performance, right?
Holt: Absolutely. It’s so fun because they were so easy to connect with. It made my job so easy, and it was just really a breeze. 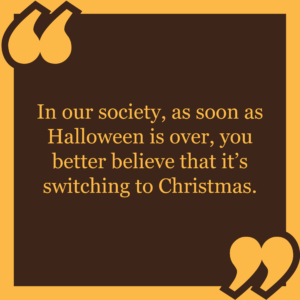 Sometimes you get off of shooting an overly dramatic thing, any sort of horror, or any sort of extremely emotional thing, and to hop on a comedy or something like “The Perfect Christmas Present,” it’s such a relaxing situation because you just get to connect with the other person.

TrunkSpace: The makeup is barely dry on our Halloween costumes. What advice do you give us to transition our brains from spooky spirits to finding our holiday spirits?
Holt: It’s gonna happen very fast. You get four days to figure it out! (Laughter)

The other thing is, it’s nice because I’ve been going into some stores, and they’re already in the Christmas spirit. I was like, “Whoa, okay… we’re there.” In our society, as soon as Halloween is over, you better believe that it’s switching to Christmas.

TrunkSpace: The movie is actually kicking off the Hallmark Movies & Mysteries Most Wonderful Movies of Christmas programming event. That has to be pretty exciting that they chose your film to launch such a big event for the network?
Holt: Yeah, we knew we had something special going on as we were filming. After each day we just knew we were surpassing what was expected, and doing it more justice than I think any of us knew we were initially going to do, so I’m actually very pleasantly surprised that they chose it for this position.

TrunkSpace: Why do you think this type of seasonal content continues to resonate with so many people?
Holt: I think there’s something very heartwarming about this kind of thing, because you get your family together, everyone sits down, you’re all together on the couch, you’re probably having some snacks while you’re watching it, having some laughs, having some feel-good moments and you’re with the people you love. It’s a moment to get lost in another world, and obviously there are some fantasy elements to all of the Christmas movies, and it’s a really fun world to escape into, especially before everyone’s really geared up and ready for Christmas. It’s such a great moment for everyone to start and sort of slip into that element early on. So that’s why I’m excited – to be the first one to start off the holiday season.

TrunkSpace: From a performance standpoint, was it easy for you to discover who Jenny was? Did you have time to absorb the material and discover her as a character?
Holt: Yeah, I thankfully got a few weeks beforehand where I was really able to dive into my own character and kind of answer all those questions for me and make sure that I knew her inside and out before I stepped onto the set. I didn’t, however, get a chance to meet Sam Page, who plays opposite me, and Blair Hayes, who’s the director, until the day before filming. Thankfully, they’re lovely and such a great crowd to work with. It was really, really easy to fit in with them. When Sam and I started off, our first scene was kind of an argument and it was interesting because we had to break a connection there that hadn’t really quite been built yet. But thankfully, he’s so amazing to work with and such a great actor that it was really easy for us to have had that relationship built, for us to be in that place, to break it, even just in a day.

And overall, in comparison to some of the other roles I’ve done, this one didn’t require some crazy, dark niche and extreme studying to do beforehand. She’s such a sweet, loving person, and works for the charities, and does have some pain in her life that involves her family members and her upbringing, but overall, I didn’t have to get into the mind of, like the “Z Nation” show, where I’m like a half-human/half-zombie and I’m actually mentally five-years-old in a 28-year-old’s body. That was complicated. This one wasn’t so complicated. That was what was so great, the simplicity of her.

TrunkSpace: It’s an obvious question for the star of “The Perfect Christmas Present” but we have to ask it… what would the perfect Christmas present be for you this year?
Holt: Wow, you know, surprisingly I haven’t gotten to that yet, so I haven’t really thought about it. I am very fortunate right now in my life to say that I have mostly everything that I’ve ever wanted, but there is something I’m working toward as an adult. “As an adult now…” (Laughter) I’m working towards purchasing my first home, so that is something that I would like to give to myself.