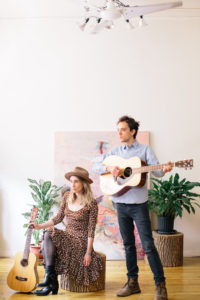 TrunkSpace: Your latest album drops today. What kind of emotions do you juggle with as you gear up to release new material into the world?
Nelson: Certainly a mix of nerves and excitement, but also a sense of relief. There’s a kind of unsettled feeling that goes along with living with this unreleased music for so long, but every day that the release gets closer, that feeling goes away a bit.

TrunkSpace: There’s so much music out there… most of which is accessible in a click or two. Can that be an overwhelming thought when you consider how crowded the landscape is?
Nelson: It can feel that way. But it’s amazing how, once you start to find where you fit into that landscape, you realize that it’s not so much one big crowded landscape, but lots of little mini-landscapes that don’t seem nearly as overwhelming. Being in New York has been so much fun because, of course, there’s everything here. Incredible jazz players, bluegrass players, rappers, DJs. It all enriches the music scene, but it’s so varied that things don’t crowd each other.

TrunkSpace: There’s so much to love about your new album, but what we enjoyed most was that it has a complete front-to-back feel to it… like an album produced in the 1960s. Was that something you set out to achieve when you first started to put the record together? 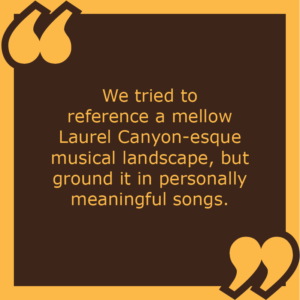 Nelson: We definitely wanted that sort of thing from the beginning. We love albums and that’s just kind of the world we come from. But I think the album kind of naturally took shape during the writing and recording process, rather than being planned out. The songs are written separately from each other over years, but then recorded all at once over days or weeks. So maybe there’s two songs that could be done with a similar feel, but you end up doing one of them softer or faster or with a different arrangement, because you’ve already recorded a few of the others and you can suddenly see a new way for this one to fit in.

TrunkSpace: Beyond writing and recording the music itself, what was the most enjoyable aspect of bringing the album to life? What is something that the average person may not consider, that in the end, you look back on fondly in terms of the process?
Nelson: The demo’ing process pushed us in a couple directions, and it felt serendipitous when things finally fell into place. For example, we picked up my grandfather’s classical guitar and created a delicate strumming pattern for “Ragdoll Blues” that we ended up keeping for the recording. Then, the actual recording process involves moments of downtime and introspection, and it was great hanging out with our fellow musicians and engineers. Having lunch together, talking about music, seeing what everybody else is into at the moment, what they’re excited about. All of that stuff really ends up feeding into the music, and it’s fun to look back and see how much the album is a product of that particular moment with those particular people.

TrunkSpace: What are you most proud of with the album?
Nelson: I am really proud of the vulnerability that you can hear in the album. We tried to reference a mellow Laurel Canyon-esque musical landscape, but ground it in personally meaningful songs.

TrunkSpace: We love great music, but within great music we are particularly drawn to great lyrical snippets – the kind that make us curse the universe for not coming up with ourselves. What is a favorite line of yours off of the album and why?
Nelson: Probably the first lines from “Châtelet.” 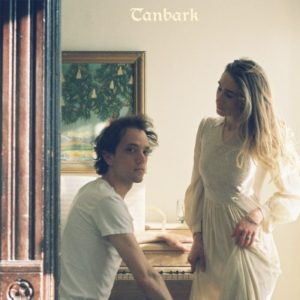 The song is written from the perspective of Voltaire, and it is addressing his lover (and one-time protegée), the great thinker and physicist Emilie du Châtelet. I was reading a biography about their affair, and I was struck by how ahead of their time they were and also how Châtelet was limited by being a wonderful mind in a woman’s body. I love thinking about the repercussions of putting pen to paper and what that meant for them.

TrunkSpace: Where are you hardest on yourselves as artists?
Nelson: We’re always working on being better musicians and writing the most honest songs possible. It is definitely hard to finish one song, let alone a whole album.

TrunkSpace: What has music brought into your life that you would have never expected? Has there been a benefit or side effect that you would have missed out on had you not pursued this path?
Nelson: The musicians we meet. We’ve had evenings where everything just sparks, whether that is in our rehearsal space, in the studio, or on stage. Those connections are magic.

TrunkSpace: What has been the highlight of your musical career thus far?
Nelson: It is hard to pinpoint one thing, but I love the tangibility of finishing and releasing a song that has been brewing for years. Every time it is exhilarating!

TrunkSpace: Time machine question. If you could jump ahead 10 years and get a glimpse of what your career looks like a decade from now, would you take that journey? If not, why?
Nelson: Yes – why not? I’m looking at my tea bag right now and it has a Lord Byron quote on it: “There is pleasure in the pathless woods.” You never know what magic is in store (or what perils!), but hopefully we can continue to share our music and meet more like-minded spirits.