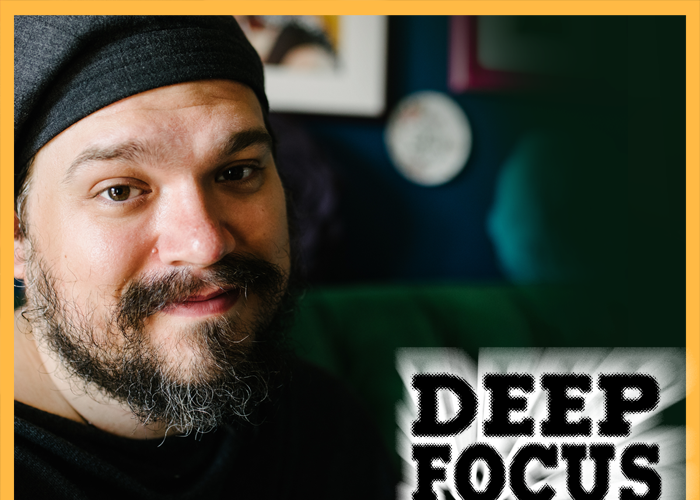 This time out we’re chatting with Justin Sayre, creator and star of the new stage show, “I’m Gorgeous Inside,” which premieres tonight at Joe’s Pub at the Public Theater in New York. We recently sat down with Sayre to discuss how lonely real estate served as the catalyst for the show, how much he likes to put out fires on stage, and why he’s ready to tell any bad girl’s story.

TrunkSpace: Your show “The Meeting” ran for eight seasons. With bands and songwriters, you hear a lot of them talk about how they keep songs “fresh” while they’re touring with the same material for extend periods of time. How does that work for you on a show?
Sayre: It was a different show every month, so it was always new material. It was always a different icon, and it was always different guests. There was always a lot of room for experimentation, and a lot of, “How do we want to do this this month? Here are our parameters, and how do we play within that?”

Getting to meet these great downtown artists, and people from Broadway, and other people making interesting work in New York, inspired me certainly to push myself further, and to push the show in different directions. Being a show that was inherently political, there was always new fodder to make it work. But it always came back to this idea about community, and bringing people together, and really creating space for a community to form. Not just around the show, but in the world.

That became just an overwhelming part of the show. I built a different kind of repartee with an audience, then I would have otherwise. It didn’t ever feel stale, it just felt like we’ve done this now. It was time to start a new adventure. I also really wanted to step out on my own a little bit, and create something that wasn’t so driven by politics. Even though I think a lot of my work is political, I wanted to make something that was more… just about my ideas and things like that, rather than constantly in response to what was happening.

TrunkSpace: So what was the origin story of “I’m Gorgeous Inside?” Where did it all begin? 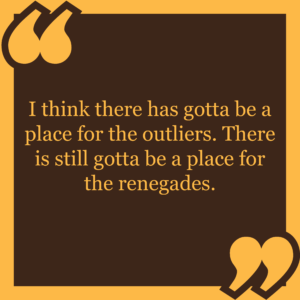 Sayre: I worked on “2 Broke Girls” in LA. When I would drive to work, there was this real estate sign on a house that said, “I’m gorgeous inside,” and I thought, you’ve got to be at a pretty low point when you have to tell people, “No, wait a minute. I may look like hell outside, but inside, oh my God, I got all my original floors. I got everything!” (Laughter) I always thought it was a really funny title, so when we came up with the show, I was like, “I want to do that as the show, ‘I’m Gorgeous Inside’.”

When I was talking about things that I was really interested in, it was the tough girl archetype, this bad girl archetype that so many gay men are interested in, and think about, and emulate in their ways. But really, getting past that and talking about what that meant to them in a concrete way, rather than just an abstraction or some kind of hyperbole that makes fun of those women. I’m not interested in that. I’m interested in what was the core, igniting spark that made you look at Rizzo in “Grease” or some Bette Davis movie, and you’re like, “I gotta go with her!” I think it’s because they’re characters who are generally not given enough, but demand more. They are shortchanged, but they don’t take it. I think for a lot of queer people, that means something. Seeing somebody who is told by the world “no” and continues to demand a “yes” is really empowering. Once that kind of percolated in my head, the idea of “I’m Gorgeous Inside” kind of happened. Then it really just kind of flew from there.

TrunkSpace: And what’s great about the title is that it really does have multiple meanings. It’s that funny origin story, but also, it’s about self-acceptance.
Sayre: Oh absolutely. Absolutely. It sounds very highfalutin, and it sounds like it’s gonna be some therapy session, but it’s really just a bunch of jokes. It’s gonna be fine. (Laughter)

TrunkSpace: What emotions are you going through as you build up towards opening night?
Sayre: I think I’ve been told I have a lot of unnecessary fear. I think that’s fair to say, because I know myself well enough at this point that once I get out there, I’m going to be fine. I’m going to know how to put out the fires, even if I start them. (Laughter) I think right now it’s just like, “Oh wow, we’re really going to do this thing. We’re going to take it to this place. My work is going to go now in yet another direction.” 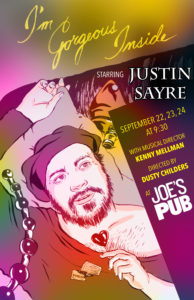 There’s trepidation about it, but there’s also an excitement, because one of the things that I’ve learned, after having done “The Meeting” for so long, is that I love kind of creating problems on stage, and solving them – this mentality of you know you can do it. You know you can be with an audience, and you can take them places. I feel very lucky that such a large group of people trust me, and have continued to do that. Once I concentrate on that, the other stuff really goes away.

TrunkSpace: And in a way, you kind of open the door for putting out fires because there’s audience interaction, right?
Sayre: Oh, always. Always, and one thing that were doing in this show, which I’m so excited about, is when I used to drink, I never had any money. I would have little contests with my friends, and see if they would buy me a drink. One of the contests was, they would give me a girl’s name, I would tell their whole life story in 10 minutes. It would have a beginning, middle, and end. It would be really specific, and if I could do it, and do it well, they would buy me a drink. In this show, I’m having Jenn Harris, who is a wonderful actress, come dressed as a different bad girl of her choosing each night, without me having seen her. She comes out on stage, and I, in front of an audience, will tell her life story for 10 minutes. We’re gonna play this game. We’re gonna see how it works. Jenn is super excited, because she gets to be crazy, and do whatever she wants. I’m really excited because not only is it working with Jenn, but it’s kind of keeping that spirit alive of, “All right, go! Make up a story! Do it!”

TrunkSpace: You’ve written for television. You’ve written for stage. You’re a published author. What would you like to tackle with the written word next?
Sayre: I just finished a new play, so I’d really like that to have a premiere in New York. I’m very excited about that. I’ve written a film over the summer. We’re shopping that around this fall. I’m working on two pilots right now. There’s lots of work, but I think really in the future, it’s figuring out how to integrate it all together in some weird amalgam. So it is film, and it is television, but I came up in the theater, and I came up in the downtown scene, so it’s making art that still reflects that worldview. I don’t want to give that up, because I think now more so than ever it’s necessary. I came up with people who told me, “Don’t ever worry about being mainstream. Just make the shit you want to make.” Now everyone is pushing to say, “How do we go mainstream? How do we go viral? How do we get everybody involved?” What ends up happening is, a lot of things get homogenized because of that. I think there has gotta be a place for the outliers. There is still gotta be a place for the renegades.

For more information on “I’m Gorgeous Inside” or to purchase tickets, click here.

read more
Next Up 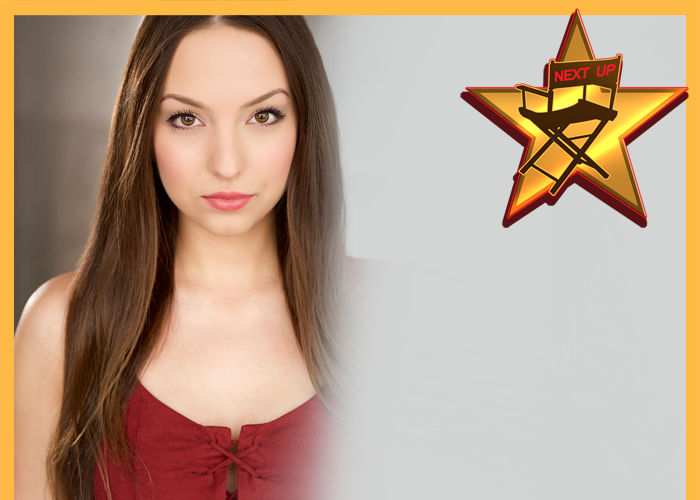 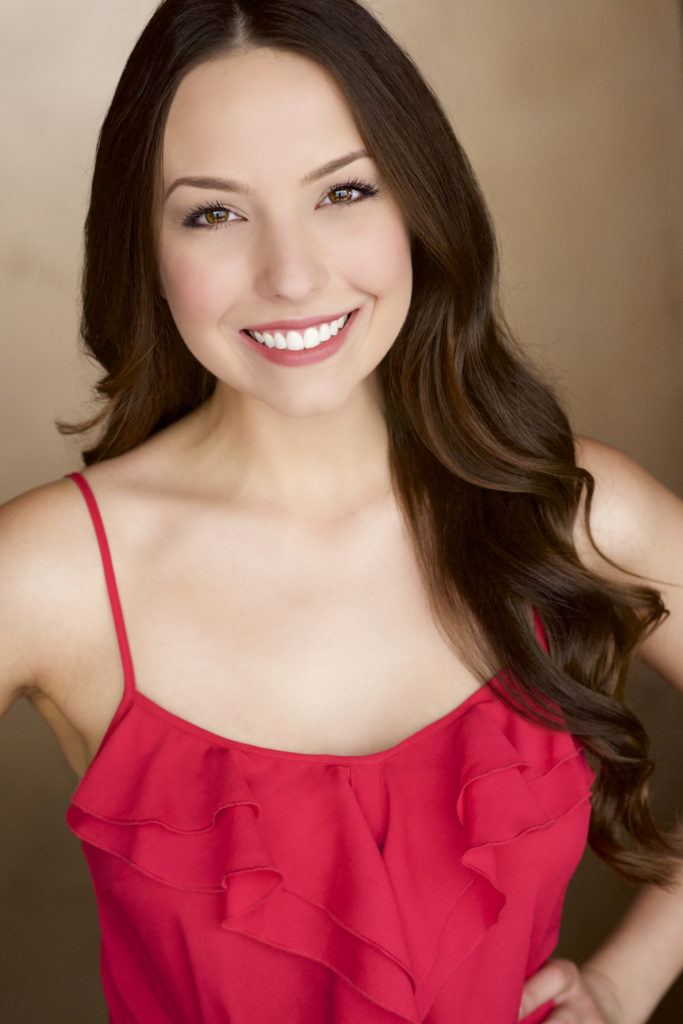 TrunkSpace: When did you know that you wanted to act for a living?
Austin: I’ve been acting since I was about eight, so it was just a matter of when I was going to move to Los Angeles or New York!

TrunkSpace: Was there a particular performance or actor/actress from your childhood that you remember being drawn to and inspired by?
Austin: I absolutely loved Judy Garland and “The Wizard of Oz.” I was captivated. Once I was old enough to watch “Titanic, according to my mom, Kate Winslet. (Laughter)

TrunkSpace: How did you decide to approach your career as an actor? Did you formulate a plan of how you wanted to attack what is known for being a hard industry to crack?
Austin: I went to school first and got a BFA in Theatre and Acting. I did as many student/short films I could do while I was in school in order to get experience and footage. In all honesty, nothing can prepare you for the industry in Los Angeles until you’re 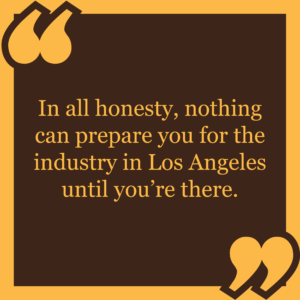 TrunkSpace: When did you decide to move away from your home and pursue acting as a career? How old were you at the time?
Austin: After graduation from college, so 22. I graduated, and two months later moved to LA.

TrunkSpace: Was that move an easy transition for you initially? How long did it take you to feel at home and find a good support group of friends and peers?
Austin: Oh my gosh, hardest first year of my life! I call it ‘the dark year.’ (Laughter) I would say I started to feel that LA was more of a ‘home’ after a year to a year and a half. It’s still hard sometimes, but I love it.

TrunkSpace: What has been been your biggest break in terms of a particular role or project thus far?
Austin: I booked a co-star playing Vanessa on CBS’ “2 Broke Girls” about five months ago. That was amazing. SO much fun. 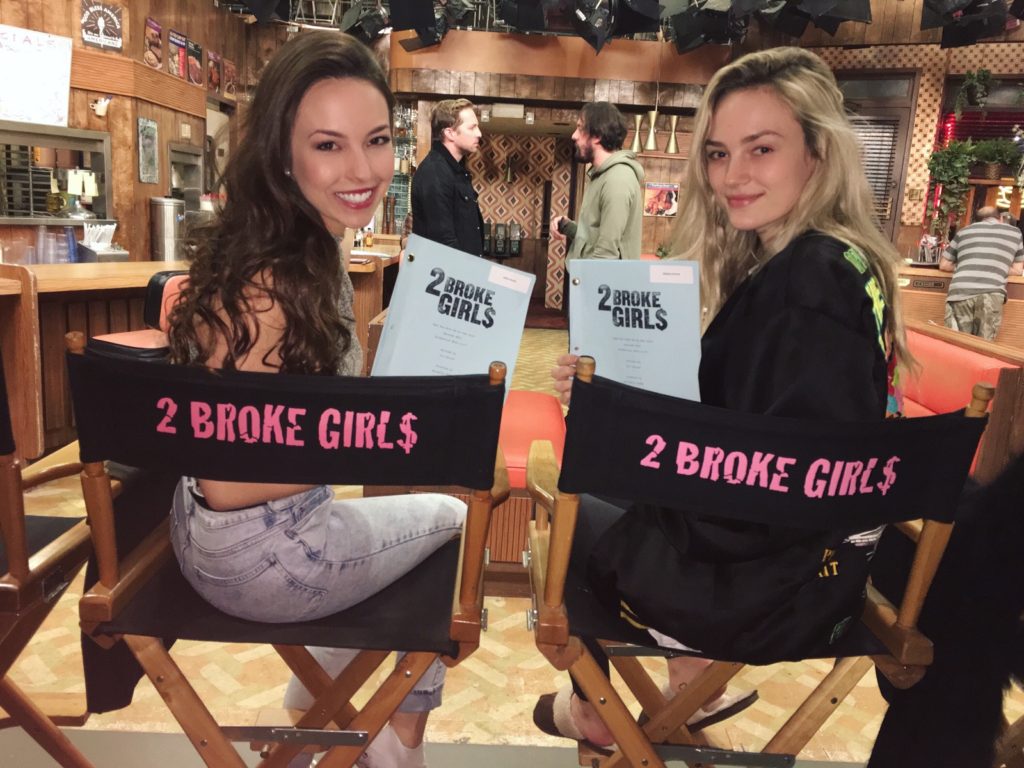 TrunkSpace: Is there a specific type of role you’d like to take on or a specific genre that you feel more at home in?
Austin: It’s funny because I have booked more comedy roles out here so far, but I love drama. I want to do a psychological, uncomfortable role where I have to ‘dig deep.’ I’d love to be on “The Handmaid’s Tale” or “Stranger Things” and “Shameless.”

TrunkSpace: What would you say is the greatest strength an actor/actress can have outside of acting ability itself?
Austin: Drive and confidence.

TrunkSpace: What is your ultimate dream when it comes to your acting career? Where would you like your path to lead?
Austin: I’d love to be in an Academy-nominated film. I’m sure that is most actors dream out here. I want to be a part of something that is more than just ‘a movie,’ but a story that lasts a lifetime.

TrunkSpace: What advice would you give another young aspiring actor/actress who is considering moving away from home to pursue their dream?
Austin: Just keep going. It’s going to be really hard. There’s going to be a lot of ups and downs, but don’t give up, especially right away.

TrunkSpace: Where can people (and casting directors) learn more about you?
Austin: My IMDb is www.imdb.me/averyaustin. I have an Instagram as well, @avery.austin.