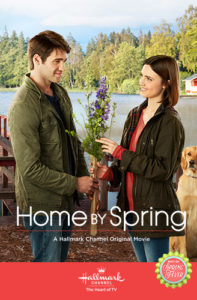 In this high speed information age, things are getting thrown at us fast and furiously every minute of every hour of every day. To calibrate, TrunkSpace is introducing a subsection of our popular Wingman/Wingwoman Wednesday column where instead of taking our usual in-depth approach, we’re sitting down for a speed round with the individuals who pleasantly pop our pop culture bubbles.

This time out we’re going chatting with Steven R. McQueen who has dipped his toe in the Hallmark Channel water, starring in the latest original movie from the network, “Home by Spring,” which premieres Saturday at 9 pm ET/PT.

TrunkSpace: This is a Wingman Wednesday: Lightning Round, so let’s dive right in. “Home by Spring” is your first time working with Hallmark Channel. What did you take from the experience?
McQueen: Hallmark Channel makes great movies about romance, and then it just seemed like a great opportunity. It was fun.

TrunkSpace: You’ve done lots of television, including almost a decade on “The Vampire Diaries.” TV works quickly, but these movies move even quicker. Did that force you to change up your own approach at all?
McQueen: No. I’m pretty used to a TV schedule so everything is fast paced and a quick turnaround, which is nice ’cause you can see it a little quicker. Yeah, it was all in all a lot of fun.

TrunkSpace: In the movie there is a lot of history between your character Wayne, and Poppy Drayton’s character Loretta. Did you guys have time to prepare and work out what that relationship looked like before stepping on set?
McQueen: Yeah, we had rehearsals. We rehearsed a little bit together and then with location and this and that, little things changed on the day, but we definitely had a rehearsal process.

TrunkSpace: With the characters having that history together, do you think that sort of enabled you and Poppy to play up different elements of the relationship that perhaps people aren’t used to seeing in a movie like this? 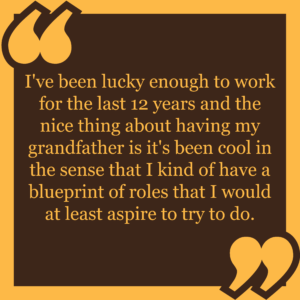 McQueen: I mean, the story is about love lost and love found again. We definitely have our moments going at each other.

TrunkSpace: Was there something kind of cool or different with Wayne as a character that you were excited to play and get to inhabit that perhaps you haven’t had an opportunity to tackle in the past?
McQueen: Just kind of location and circumstance but other than that, not really.

TrunkSpace: We know you come from a family who has a rich history of working in the industry, including your grandfather Steve McQueen. Was a career as an actor kind of ingrained in you? Did it almost feel like it was a choice driven by genetics?
McQueen: I’ve been lucky enough to work for the last 12 years and the nice thing about having my grandfather is it’s been cool in the sense that I kind of have a blueprint of roles that I would at least aspire to try to do. At some point I have to play a police officer, a bank robber, and at some point, do a Western. Will that come to fruition? I guess we’ll see.

TrunkSpace: Do you think sort of having the family history, having an insider’s look at how things operate, better prepared you for just how the industry works?
McQueen: I don’t know if anything can prepare you for how the industry works. (Laughter) But yeah, it definitely opened a couple doors. I can’t complain about that.

TrunkSpace: Why do you think Hallmark Channel movies continue to bring in audiences and that the network as a whole has seen growth while others have seen their viewership decline?
McQueen: You know, I think it’s always nice to have stories about love with resolution at the end. Hallmark seems to corner that pretty well.

TrunkSpace: And there tends to be a theme involved that everyone can relate to, whether its love, or loss, or both.
McQueen: Yeah, I agree. Things seem to work out the way they’re supposed to.

TrunkSpace: And honestly, there’s something nice about a happy ending, because nowadays, so many shows and movies take a different approach.
McQueen: Yeah, exactly. I think we all hope for happy endings, right?

TrunkSpace: In terms of things moving forward, are there a particular set of goals that you have for yourself, not only short term, but long term as well?
McQueen: It’s just, I like to work. As long as I get to keep working, then I’m happy.

TrunkSpace: Do you see yourself venturing behind the camera at all?
McQueen: Yeah. The chance to direct would be incredible for sure. I guess that’s one of those things you gotta wait and see what opportunities present themselves.

The latest opportunity presenting itself, “Home by Spring,” premieres Saturday at 9 pm ET/PT.