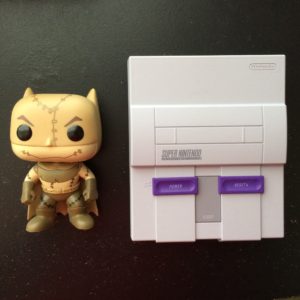 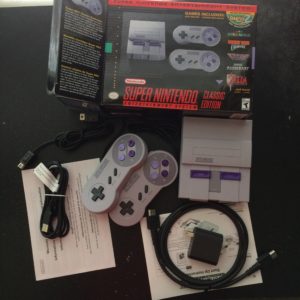 Break out the Ecto-Cooler and Ranch Doritos! We’re about to hop aboard the DeLorean and head back…to the early 90s and play some of the classic games that shaped the youth of so many gamers. It’s like a digital class reunion, only you actually WANT to see all of your old compatriots. After all, you blasted through battles with Mega Man, slayed vampires with Simon Belmont, rescued Zelda with Link, and eaten magical mushrooms with Mario… if you were to box up the childhood of a Xennial, it would probably look just like the SNES Classic box that houses a tiny-sized version of the system with built in games. Grab your plunger and pull up your overalls, because we’re about to jump down the nearest green pipe and immerse you in TrunkSpace’s take on the SNES Classic!

First, we’ll start by taking a look at the hardware that makes up the SNES Classic. We could use a ruler, fork, or hand to show you the approximate size of the system… but we thought using a Funko Pop! Vinyl figure would be more appropriate. As you can see, the system is about one Pop! Figure across and one figure tall. It’s tiny and compact. We love this, because if you’re like us, your entertainment centers are filled with blinking router lights, clocks, DVR’s, game systems, etc… so it’s nice to have something that does not take up much space. It’s “SUPER” easy to hook up (pause for comedic applause from the obvious pun). There is one USB cord that hooks into a power adapter and one HDMI cord that plugs directly into your television. Two controllers are included and appear to be exact replicas of the originals. They are lightweight and easy to grip. We wish the cords were a little longer, but at least they are almost double the NES classic controller cord length. You can purchase wireless controllers if you want to drop some extra Mario gold coins at the store or online. The controller plug-in port actually utilizes the Wiimote plug in. You flip down the front facade of the original ports and connect the controllers this way.

Okay, onto those nostalgia-packed games that are built into the system. There are 21 in total. You can unlock Star Fox 2 by simply beating the first stage of Star Fox 1. This is pretty huge, because 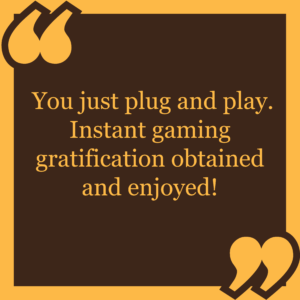 it’s a brand-new game that has never been released. Literally, the worst part of this gaming experience is just trying to figure out which classic game you want to play first. It’s tough! Personally, we like to eat our dessert first, and since it’s October (or TRUNKTOBER as we call it here), we started with Super Castlevania IV. It was amazing to step back in time and once again crack Belmont’s pixelated whip. We remember how revolutionary this was for the time. Nintendo was exploring multiple planes of depth in the gaming world, and it was a definite building block to the gaming world that we now know today. Everything was exactly like the classic game. You hear that unforgettable soundtrack playing, and it all starts coming back to you. It’s like you never left. The funny thing about playing the classic games are the things you forget about… like there are time limits! You have to complete the stages in a certain amount of time. Games today want to give you free reign with no limits, so stepping back in time and having that added challenge was both nostalgic and anxiety-inducing… but in a good way!

There were two new, unique features to the SNES classic that we thought were innovative. The first one is a simple one, but a nice detail. Since you’re playing on a square screen, you have a border on your TV, so why not dress it up? That’s right, you can pick your own border theme to surround your gaming experience. The other feature we were taken back by was the “REWIND” feature. Say you’re playing along and, DOH!…you made a stupid mistake, like falling off the ledge instead of going down the stairs, well just hit the rewind feature and give it another go. You don’t have to start over from a checkpoint. To be fair, this has been a thing people can do with Snes Roms and emulators, but it is neat to see it officially supported. 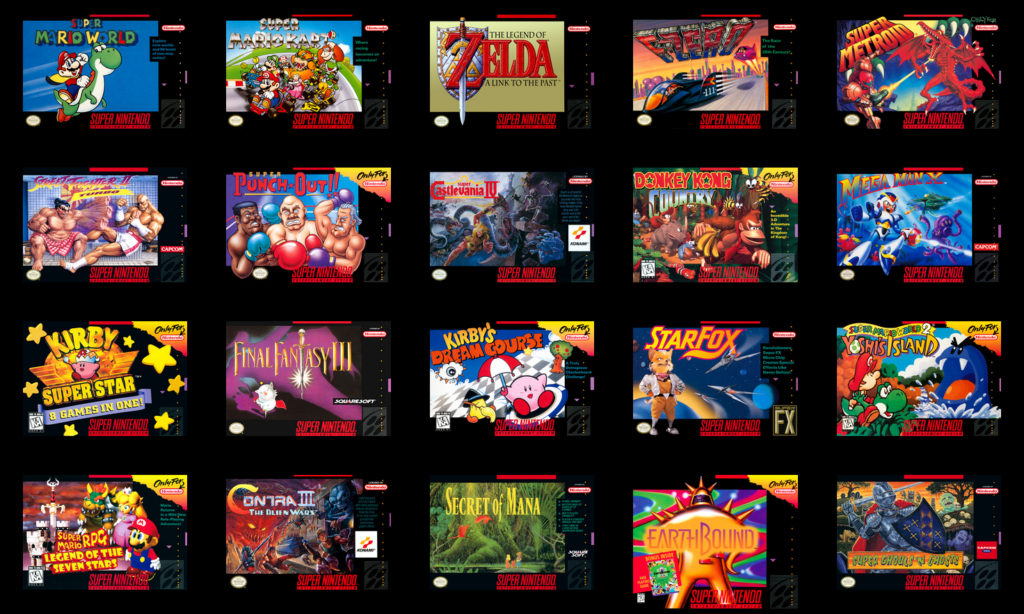 We sampled all of the games, and we could write pages and pages on these classics, but you already know them. You love them. You know their stories and how they go, so we will just cut to the chase. If you can find one of these systems, BUY IT! We were fortunate enough to land one via ThinkGeek the morning online sales went live. The value for the system is truly incredible. It set us back about $94 after shipping, tax, etc, but for 21 games, that is a steal. Not to mention the RPGs like Final Fantasy III, Secret of Mana and our favorite, Earthbound, can take days to complete. If you have kiddos, younger nieces or nephews, this is a great system to share with them. There are a ton of family friendly games, and you don’t have to worry about language, extreme violence, or “adult situations.” They have some great save features built in, so you don’t have to complete the games in one sitting. One of the only drawbacks is you have to reset the system to start a different game. That being said, there is virtually NO load time and NO updates. You just plug and play. Instant gaming gratification obtained and enjoyed!