Having worked behind the scenes of the music industry promoting other artists, Ayisha Jaffer, the crux of Skux, has a unique perspective on bringing music to the masses, though she admits that there’s no magical equation in capturing the ears of listeners.

“It’s always kind of a guess and check, hit or miss, but I actually have fun with that side, trying new things, trying things differently, and seeing how people react,” she said in an exclusive interview with TrunkSpace.

We recently sat down with Jaffer to discuss party punk, chart topping in New Zealand, and why you need to love what you do to keep doing it.

TrunkSpace: As an artist – a creative person – and you gear up to release something into the world, how do you prepare yourself for sending your art out into the world and relinquishing control over it?
Jaffer: How do you prepare yourself for that as far as just letting the world have it? I guess, you kind of can’t. It’s kind of just up to the people if they like it or not. I like it and I’m proud of what I put out, so for me, I’m just excited that other people can hear it. Hopefully they can hear it and have fun with it, because for me, it’s just a fun EP. I think a lot of people take themselves to seriously, so hopefully it lets people relax, chill and have fun, which is why I call it party punk, because I want it to just be enjoyable. I’m just having a good time, and I hope everybody else can feel that and have a good time with what I have.

But yeah, there’s nothing to prepare you, and usually on the day of release, I go out of service somewhere so I don’t see what happens, and just kind of focus on something else and come back. And then, it’s cool to see the reactions people have to what’s out there.

TrunkSpace: That’s got to be a healthy approach to take in the digital age because you aren’t refreshing to see the reactions. You can put some space between yourself and the release and then come back and get a lay of the land. 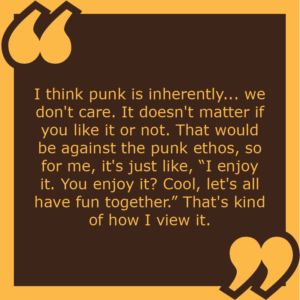 Jaffer: Absolutely. There’s no normal formula anymore for putting stuff out, and there’s so much stuff out there that it takes a while for people to discover it sometimes. And sometimes they don’t, because there’s so much. So, I honestly think people choose what they like, and I think that’s awesome. Spotify… it’s not curated as much as it used to be, and so, I think that’s pretty cool in itself, so if people hear it and they like it, great.

I used to have a professor, a long time ago, tell us about… because I worked in music on the other side, as a manager… and he was like, “Yeah, okay, so what? You have 20 likes on Facebook.” This is when that was normal. (Laughter) He was like, “Think about that. You have 20 people who have listened to your music, who like your music, who are influenced by your music, who are fans of your music.” And that’s a lot of people, if you think about it. So to think I have 900, or 1000, or more, that’s just crazy. So I think that’s a pretty cool way to look at it.

TrunkSpace: You mentioned being on the other side of the music for a while. Do you think that has given you a unique perspective in how you gear up to a release and put music out into the world?
Jaffer: Yeah, for sure. I’m totally conditioned to the way that I put out music, but every artist that I’ve ever worked with, and every project I’ve ever worked on, we always tried to do something different because we knew there was no formula from the beginning, even when there was a formula. And the music industry is always evolving and changing by the day. That’s why I liked working in it because it kept my days different.

So yes, because I’m aware of some of the different, new things happening and things people have tried, and no, because like I said, it’s always evolving and changing. It’s always kind of a guess and check, hit or miss, but I actually have fun with that side, trying new things, trying things differently, and seeing how people react. I actually never intended Skux, the project, to be a serious project. It was always just a fun project. And because it’s punk – at least I know from the industry perspective, punk is not a very sellable music, normally. For me, it’s just a passion. I love punk, and I miss it in the scene. I miss hearing it as much as I used to. It seems to be having a little bit of an emergence, but I was really surprised that it (Skux) did take off as well as it did, especially in New Zealand. One of the two singles I put out was number one for several weeks on radio, and that was nuts to me, because I was like, “What?”

TrunkSpace: And that’s what’s so great about the journey of art, you never really know where it will go when all is said and done. People take from it what they want, and in this case, we’d imagine you’d have never dreamed of having a number one single in New Zealand.
Jaffer: No way. My friends were like, “We’ll pitch it to radio or something.” And I was like, “That’s cool, whatever.” They were like, “Do you want to focus on one track?” and I said, “I don’t care. Give everybody both tracks. I don’t care.” And then, it was number one, and I was like, “That’s stupid. What!?” (Laughter) So you really can’t… you can plan to a point, but you can’t.

My way of planning with this, for the EP, was I just planned the way that I like with old school releases, which was having a concept. I loved a concept when I was younger, so I just kind of did it how I selfishly wanted it to go. If people like it, great, and if not, that’s fine too. I just wanted to selfishly put out a concept EP. And I wanted it to be ridiculous.

TrunkSpace: You never intended Skux to be a serious project, so, now that it has taken on a life of its own, do you feel like that takes the pressure off and allows you to just keep having fun with it?
Jaffer: I’m stoked that it is. Because in my goals with music, anyway, it’s just to tour and be able to do that because that’s my favorite thing to do from the industry side as well. So if that can happen, that’s awesome. And, yeah, it does take some pressure off, but you still get… it’s funny, because I never really felt the… 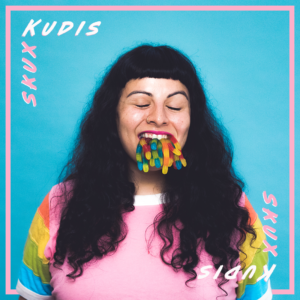 I hear from artists, on the vulnerable side, be like, “Oh my God, why isn’t it doing well? Why isn’t anyone liking it? Oh my God.” And I kind of get that, in a sense, because once you hit something, you’re like, “Oh, why am I not number one all the time forever?” Because that’s the ridiculous thing for artists to think, but I totally get where they’re coming from because it’s vulnerable. You made this thing. This is your art. This is you putting out your real self, theoretically, or at least your real fun self, or whatever your alter ego is. So I get that. But it does take some pressure off that I’m happy with it because I think that if you’re not happy with it, then, of course, it makes it harder if you’re doubting yourself about your music, and you’re not sure if it’s good, and you care about what other people think. I think punk is inherently… we don’t care. It doesn’t matter if you like it or not. That would be against the punk ethos, so for me, it’s just like, “I enjoy it. You enjoy it? Cool, let’s all have fun together.” That’s kind of how I view it.

TrunkSpace: Well, and, as an artist, if you’re working on something that you’re not enjoying, and then, like you said, going out on the road to support it for eight months to a year or more, that’s a miserable year if you’re not in love with what you’re doing.
Jaffer: Oh yeah. I’ve seen it too. It’s the worst. So you’ve got to like it. And you got to not care what other people think. Essentially, I think, the best music is music that is part of your experience, or your outlet, or something you just really enjoy. And if it’s not, and you made if for someone else, and they don’t like it, or whatever, or you just made it for someone else – you made it for only someone else, I should say – because a lot of it is, of course, for the people. They’re relatable, they can go through what you’re going through or whatever, or you’re trying to say a political statement, or you’re trying to just have fun. But if you made it only for someone else, then you’re going to be miserable no matter what, I think.