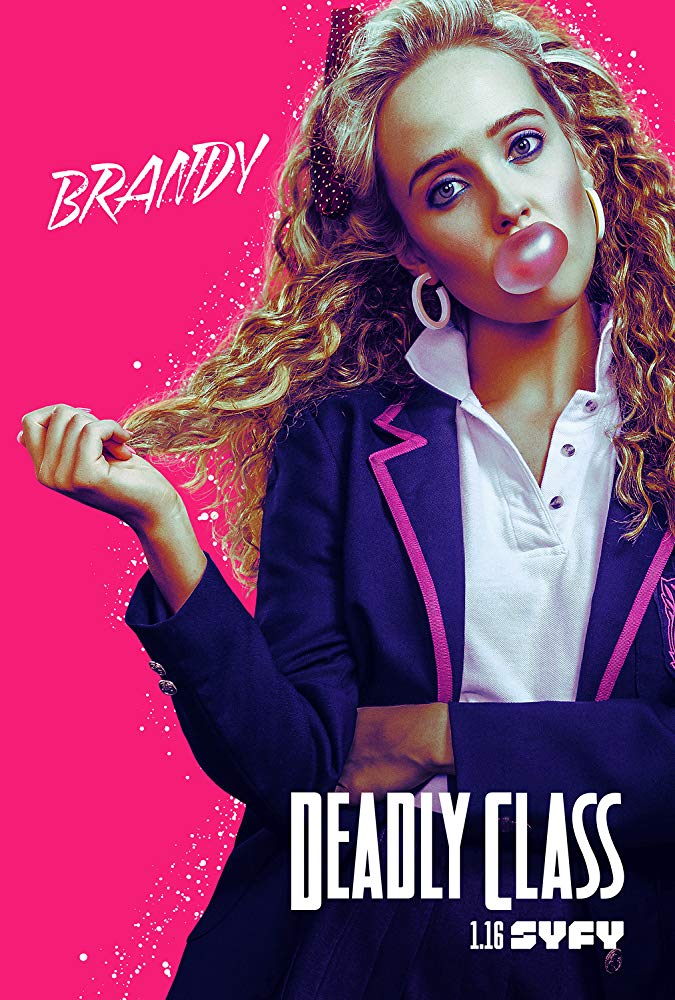 Based on the graphic novel by Rick Remender, “Deadly Class” is one the most anticipated series of the new year for comic book-loving television viewers. With an incredible ensemble cast that represents the future of Hollywood, the Syfy action-fest takes place at a high school for assassins during the 1980s and is filled to the brim with counterculture references, many of which are still relevant today.

This time out we’re chatting with Siobhán Williams, who plays Brandy Lynn, to discuss the fears of taking on such a controversial character, why she ultimately decided to tackle Brandy, and the reason she’d rather be playing Red Dead Redemption 2 on PC than chasing fame.

TrunkSpace: Between the release of “Welcome to Marwen” and the first season of “Deadly Class” kicking off, we would imagine this is a very exciting time for you. Is it necessary to strike a balance between enjoying the moment and suppressing expectations, because this does seem like a business where so much is out of your control once a project calls wrap.
Williams: Thank you! It’s definitely been exciting. For sure, there is so much that can go wrong within a project. It’s a miracle to even get a script green-lit, and once that happens there are about seven million different roadblocks that can set it back or stop it from ever seeing the light of day. Even if it does come out, your scenes could be cut or role diminished, any number of things. You can never have expectations in this industry – you have to remain present and enjoy the process. Art is never finished, only a 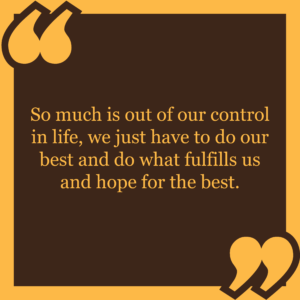 bandoned, so I think every artist needs to learn to enjoy the process. I don’t think any decent artist can look back at their completed work and say “it’s perfect, I wouldn’t change a thing.” But truly I think this is something that can be applied to the human condition as a whole – so much is out of our control in life, we just have to do our best and do what fulfills us and hope for the best.

TrunkSpace: Beyond the great cast, “Deadly Class” also has a number of people behind the camera with a track record for bringing compelling storytelling to the masses, including the Russo Brothers. Did you view your time on “Deadly Class” as just as much of an education as you did a job? What did you absorb from the people around you that you’ll apply to your career moving forward?
Williams: I view every job I have as an education. I learned most of what I know about acting and film/TV on set – asking questions within each department and observing the people around me. “Deadly Class” was a particularly inspiring environment because everyone on set seemed to be striving to learn. I think the most admirable people are those who are open-minded, egoless, and always endeavoring to learn and ask questions. Those are the people who are the most intelligent and successful because they just suck up information like a sponge. People who are cocky and close-minded never grow or evolve. I have a real love for cameras and photography, so I’d say what I learned most on “Deadly Class” was regarding technical directing. I watched all of our episodic directors closely and took note of their processes.

TrunkSpace: Your character Brandy Lynn may prove to be a bit controversial. She says and does things that will make many people do spit takes while watching. Was there a part of you that was hesitant to take on a character that people will love to hate?
Williams: Absolutely, I was hesitant. I’m still pretty scared of Brandy. I remember having a lot of conversations with my boyfriend about how it would affect my career if the show blew up and I became known for portraying a racist. Would the world hate me? But then I read the comics and discovered how intelligent and highly political they were. I realized that “Deadly Class” is (among other things) a commentary on how flawed the system is – how the wealth gap is fucking up America, how corporate greed is fucking up America. And I realized that I owe it to 2019 to portray a character that is a real-world villain. People like Brandy exist. They are everywhere, coming out of the woodwork especially now that they’ve been enabled and endorsed by the political climate in this country. People are mad that Brandy doesn’t look like J.K. Simmons in “Oz.” She doesn’t instantly look terrifying. She doesn’t look like a monster, but she is one. She’s the kind of person that we should be terrified of in real life. A seemingly innocuous, harmless individual with hatred boiling under the surface waiting for the first opportunity to strike. And if we are upset to see a fictional teenage girl spewing her parent’s indoctrinated fascist hatred on a television show but are fine electing representatives who do the same, well – that just goes to show how badly this story needs to be told.

TrunkSpace: On the opposite side of that coin, from a performance standpoint, is bad sometimes good? And by that we mean, when you’re able to inhabit a character with traits so far removed from societal norm, does it make your time on set more fantastical?
Williams: I wouldn’t say that playing a fascist is fantastical. But from an acting standpoint, the further a character is from myself the more challenging and therefore more interesting it is to play. I never wanted to be an actor who just played myself – but on television. I never wanted to be in shows where I could “just look hot” and read the lines in a minimalist and soapy teen way. I’ve always wanted to be a character actor, and travel as far from myself in as many ways as possible – and playing Brandy definitely does that. Roles that require research, a different era, a different accent, a new skill – those are things that draw me to projects. And somehow, amazingly, “Deadly Class” provided me with all of the above.

In terms of playing a villain – I do have to say that villains are often my favorite characters in shows. Christopher Heyerdahl (who plays The Swede in “Hell on Wheels”) is one of my favorite villains of all time. Watching him was so maddening it was almost cathartic. I don’t know if people will love to hate Brandy – or if they’ll just hate to hate her. But I guess we will see.

TrunkSpace: Beyond the character work, there’s also a lot of stunt work involved in your portrayal of Brandy Lynn. How does the physical aspect of the job enhance your on-set experience? When you know you’re walking into a stunt-heavy day, is it exciting, daunting or a mixture of both?
Williams: It’s so exciting! I love it. The only time it’s daunting is when I’m still in pain from stunt rehearsals like two days before. I love the challenge that choreography provides, and I love feeling strong, and one thing I love about Brandy is her fighting style. She isn’t technical like Saya or balletic like Maria, she’s just fucking savage. She does whatever it takes to win, and it’s not finessed, it’s just scrappy.

TrunkSpace: You have a dance background. Does that skill set work to your advantage when learning and perfecting a particular fight sequence or on-camera stunt?
Williams: I think so – my memory for choreography helps, and having a lot of flexibility and core strength that I’ve retained from ballet.

TrunkSpace: “Deadly Class” is based on a graphic novel. Comics continue to be a well that Hollywood taps into, both for film and television adaptation. As an actress, what is it like having that source material (and existing audience!) available to you, but at the same time, not having the pressure of stepping into a brand that the masses have been exposed to yet, like the Spider-Man or Batman universes?
Williams: Oh, it’s awesome. It’s great having the creator of this entire world (Rick Remender) to guide us. The comics are amazing to be consistently referring back to for information and backstory, and for tone. And the fact that Brandy hasn’t been as elaborated on gives me creative freedom to enhance and add to her.

TrunkSpace: If “Deadly Class” becomes a smash hit and it catapults you to a new level of fame and recognition, is that something that you would welcome? Is fame a part of the equation, or is it a necessary evil to pursue your dreams in this industry?
Williams: Umm. That’s a tough question, and something I try not to think about. Fame isn’t something I’ve ever wanted – acknowledgment of work, that’s something that would be nice I guess. But fame? I dunno. I’m a pretty insular person and the concept of fame is uncomfortable to me. I think that some celebrities invite fame, and in order to be on the front of the tabloids and be really famous you have be working damn hard for it – paying a publicist and doing tons of interviews and photoshoots and going to the clubs where celebs go to be “seen” – I mean, I think it takes conscious effort, and there’s just so many things I’d rather be doing. Like volunteering with animals or hanging with my cats or playing Red Dead Redemption 2 on PC. I am a huge video game fan and RDR2 on PC is one of my absolute favorites. I even like playing with my friend who likes using some of the fantastic RDR2 PC mods out there to get even more out of this classic game. But maybe I’m wrong. I dunno. Maybe fame shows up uninvited sometimes.

TrunkSpace: What has been the highlight of your career thus far?
Williams: Working with Steve Carell and Bob Zemeckis was definitely one of them. Realizing that maybe I can use this career for good and help raise awareness/money for causes that are important to me is the biggest one. That’s ongoing though.

TrunkSpace: Time machine question. If you could jump ahead 10 years and get a glimpse of what your career looks like a decade from now, would you take that journey? If not, why?
Williams: Dude, no. Messing with the time/space continuum never goes over well. Have you watched “Back to the Future”?!