Lovie Simone is mature beyond her 18 years. As the star of the family drama “Greenleaf,” which returned to OWN this week with a string of new episodes, the New York City native knows that her experience on the series is just as much an education as it is a job. She is learning and absorbing from her costars, including Lynn Whitfield and Keith David, and applying that acquired knowledge to what she hopes is a long and fruitful future in the industry as both an actress and content creator.

We recently sat down with Simone to discuss the emotional journey her character is set to go through, why it will be so relateable to viewers, and how her on-set life has changed since turning 18.

TrunkSpace: For you as a young actress, what’s it like returning to a series after a hiatus in production?
Simone: It feels different only because now that I know how things work, I’m going in with some knowledge of how things work and what I’m looking forward to doing. It’s fun, though. It’s like I’m working with my family. When I go back it’s like, “I missed all of you so much!”

TrunkSpace: “Greenleaf” was your first big acting job, but outside of the work itself, has it also felt like a classroom where you have been able to learn about the industry and the craft?
Simone: Yes, definitely. Every day there’s something new that I learned and it’s like I’m getting a firsthand tutoring.

TrunkSpace: Have you found yourself getting more and more comfortable in yourself as an actress and in the role of Zora throughout the process?
Simone: 100 percent, because now it’s like I’m growing with this character and I’m getting to know her more. I’m being taught by these great actors and actresses, like Lynn Whitfield and Keith David, who constantly show me with their acting how to do things and how to turn into this other character. It’s fun.

TrunkSpace: Being in film is great, but being on a series and being able to watch and experience your character grow as you do, that has to be an interesting dynamic?
Simone: It is. It’s amazing because you learn to love this character and you learn to love all the gray areas of your character. Right now in the show I’m not really a fan favorite. (Laughter) Nobody is a fan of me right now, but I love my character and I love her flaws and I love how she’s going through things. She’s me now.

TrunkSpace: Without giving away too much, can you tell us where we are going to see Zora go within the overall story this 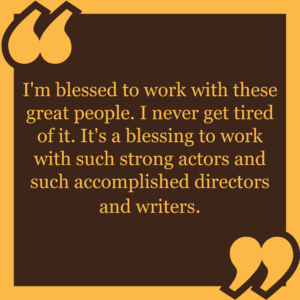 season?
Simone: You’re going to see her go through a lot of obstacles and you’ll see who she is based off of how she reacts to this because it’s going to be an eye opener. You would think something is one way and then when things get tough, she turns into this person that you’ll never even imagine. You gotta kind of see her go through these life events that are going to change everything.

TrunkSpace: But that’s totally a relatable life experience. We all go through rough patches and come out the other side a different person. At least, that’s the hope if you’re willing to grow as a person.
Simone: Yes, I feel like it is very relatable. That’s why I like that the show touches on certain things. We’re touching on homophobia. We’re touching on a lot of scandal. With my character, you’re seeing this strong, feisty teenager that everyone thinks she is, and then you’re going to see her weaknesses and you’re going to see how she’s used to being in a position of power. You’re going to see how everyone can have breakdowns and how she needs her parents and that she can’t be on her own.

TrunkSpace: As you build up for the release of the new season, is there still that same level of excitement for people to see it as there was when you were new to the industry and it was your first working experience?
Simone: Yes, it is, because I’m still relatively new to this business, so I’m still learning and I’m still wide-eyed and my mouth is open, like, “Oh my gosh! What is this? What is that?” I still have questions. I’m still going through that honeymoon phase.

TrunkSpace: And what’s cool about your job is that each new project you start working on, there’s an additional honeymoon period because of new characters, new costars, and new experiences.
Simone: Exactly! You keep starting over and over again. It’s like you get a new-found love every time. Never fails.

TrunkSpace: Looking forward, you also have the film “Monster” due out soon, which stars some amazing, accomplished actors, including Jeffrey Wright and Jennifer Hudson. That sounds like another project where you could just sit back and absorb so much knowledge and skill from the people involved?
Simone: Exactly. It was a whole different kind of character so I like being able to go into people’s lives and create them. I’m blessed to work with these great people. I never get tired of it. It’s a blessing to work with such strong actors and such accomplished directors and writers. It’s really interesting and it’s really fun. I’m happy that I’m having fun and also being able to be in that creative space.

TrunkSpace: Does being around creative people inspire your own creativity?
Simone: Yes, because now that I know there are more people out there like me and that there are people who are willing to do everything and risk every single thing, it motivates me. Also seeing it every single day, it triggers this, “I will never settle.”

I’m constantly challenging myself when I have scenes that I’ve never done, especially now that I’m 18 and working the amount of hours that I’m working. It’s bringing out a whole bunch of new emotions that I’ve never seen before. I’m learning from people who are inspired and creative. It’s pushing my creativity. It’s amazing.

TrunkSpace: That’s an aspect that a lot of people don’t think about. Once you turn 18, it completely opens up how much you can work, right?
Simone: Yes. Now I can work longer hours and I have been working longer hours. (Laughter) I’m like, “Oh gosh, the 17 hour work days are crazy!” But it’s helping me with my work ethic. Now 17 hours is like nothing to me. Also no school on set, which is even more amazing. (Laughter)

It’s a big change. A lot of things are happening. Now I have more responsibility as an actress. I like that.

TrunkSpace: You mentioned how your character in “Greenleaf” was going to be going through some obstacles. What obstacles did you have to go through, especially being so young, when you were trying to break into the industry as an actress?
Simone: I doubted myself a lot because after a while it’s like, “How many no’s am I going to take?” Then it’s not about the no’s. It’s about the resilience. I gotta be like, “Okay, brush off the no’s, learn from them.” It’s kind of hard learning from stuff at such a young age when you’re just so closed-minded and you have this perception of how the world is and then for that to be shattered and for you to try and create that mirror again to see something.

It’s very humbling also. I feel like my mom keeps me grounded. I have a good support system with my family. I don’t have a lot of friends, so the friends that I do have, I’m very close to.

TrunkSpace: It seems like nowadays in the industry, more than ever, actors are diversifying to become content creators and control their own destiny in a way. Is that something that you hope to do in the future?
Simone: I definitely want to start creating my own films because I feel like there’s a lot of stories that need to be told that still aren’t being told. I do want to direct and I do want to cast the people that I want in my movies and my shows because I feel like there’s a problem in Hollywood. That problem is a lack of representation. When there’s a lack of representation, that leaves room for a whole lot of gray areas that people don’t know. I want younger girls that look like me to see themselves in the people that I cast. That’s when you get your sense of identity, from what you see. That’s what i want to do with acting. I want to be in the position to create.