Singer-songwriter Shira questioned if she should be releasing new music in the middle of a global pandemic, but in the end, she chose to push forward, hoping that the love she pours into her writing will help others find sunshine in the midst of the 2020 storm.

“At times like these, the most healing and beautiful thing we have is music,” she said in an exclusive interview with TrunkSpace.

Her EP, Birds of a Feather is due September 18. The title track is available now.

We recently sat down with Shira to discuss having to call a promotional audible, connecting with fans over social media, and why she has always felt like an outsider.

TrunkSpace: We are all feeling the uncertainty and a cornucopia of emotions given the current state of the world and the varying levels of quarantine we have been experiencing these last few months. How has that impacted you as an artist? Have you found yourself to be creatively-inspired during this span?
Shira: It’s been really rough. Not gonna lie… I’ve written 3/4 of a song in four months. So not my most fruitful time. Also, as someone who is used to playing shows every week, it’s been really hard not sharing that connection with the audience. But I have found a deeper connection with my audience through social media. I’ve played 15 online shows and they keep me going with their love and gratitude and I am so happy to be releasing new music! At times like these, the most healing and beautiful thing we have is music.

TrunkSpace: In the middle of it all, you’re set to release a new EP, Birds of a Feather, on September 18. How have you had to change your promotional focus during this time to ensure that this work you’ve poured so much of yourself into has the best chance at finding an audience? 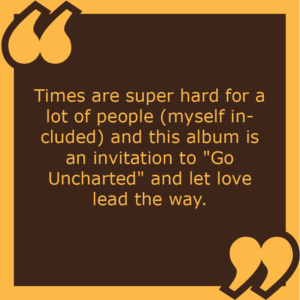 Shira: Honestly, deciding to release it now in the middle of a global pandemic was not easy. I had a crazy release plan, which included releasing a full album after performing at MUSEXPO in LA, the same festival where Katy Perry, Jessie J, and the Temper Trap were first showcased. But of course, all the plans turned to dust. Instead, I found myself with A LOT of time on my hands so I had more time to connect with my audience through social media and I saw that the more music I shared the happier they were. I realized this is actually the best time to release music. So I focus my attention on my people – the ones that have been with me for years and the new ones that join every day. I am here for them with healing music and love.

TrunkSpace: What could someone learn about you as both an artist and as a person in sitting down to listen to the EP, front to back?
Shira: That I am an eternal optimist with a touch of melancholy. That I’m a poetry buff (you’ll feel it in the lyrics). That I love to love.

TrunkSpace: These songs will ultimately also appear on your upcoming full-length album, Birds of a Feather Flock Together. As we understand it, they were all set to live together originally, but the pandemic forced you to reconfigure how you’d roll the collection of songs out into the world. When you decided to release the EP, how did you come to decide on WHAT songs would make the EP cut?
Shira: The songs on the EP are the songs that resonate the most with where I am right now and the times. “Usually” and “Go Uncharted” are an invitation to trust your intuition and the universe and go, keep moving forward even if it’s not the road you planned to take, just take it and trust there’s something there. The lyrics in “Birds of a Feather” are almost ominous since I recorded this before the pandemic; “Come find me before the flood. We’ll brave the storm together. Birds of feather.” Finally, “Wait For Me” is about being away from the one you love. I, like thousands of others around the world, have been separated from my partner because of COVID. The song is about the excitement of seeing your love after you haven’t seen them in a long time (151 days for us) and the fear of, “Will we make it?”

TrunkSpace: What are you most proud of with the upcoming album?
Shira: The amount of love and hope that are in every note and every lyric. Times are super hard for a lot of people (myself included) and this album is an invitation to “Go Uncharted” and let love lead the way.

TrunkSpace: Where are you hardest on yourself as an artist and did that manifest during the creation of this particular collection of songs?
Shira: Every song for me is a precious pearl that flows through me and comes out as a song. Everything that happens after that is in order to serve the song. Everything from the musical arrangement, to the music video and the PR. The most important thing for me is to let the song shine. I’ve nixed a few recordings and music videos, because they were just “pretty” and “eye-catching,” but didn’t elevate the song.

TrunkSpace: You were born in Rochester, NY but spent much of your childhood in Israel. How has where you’re from impacted you as an artist? Would you be a different artist if you grew up in a different city surrounded by different people?
Shira: I always felt like the outsider. Like I don’t belong 100 percent anywhere. Well, until I moved to NYC… the home of the outsiders. But before that, when I was growing up I found myself escaping to the music when I didn’t have friends or the culture barrier was too much for me to bear. I’m sure I would have been a very different artist had I not experienced so much bullying and had to find my own path away from everyone else. I think that’s part of the reason my songs carry so much hope. I need a constant reminder.

TrunkSpace: What do you get out of songwriting on an emotional level? What is it about the process that most excites you even today?
Shira: I don’t have kids… But every song is like a little birth. It’s like a piece of stardust flows through the universe implants in me and out comes the song to be shared back into the universe. For me, it’s a calling.

TrunkSpace: If you sat down with your 10-year-old self and gave her a glimpse of her future, would she be surprised by where her musical journey has taken her thus far?
Shira: I think she would be proud… that I made my own path and that I’m still exploring uncharted paths every day. That’s all she wanted to know… that she can be the unicorn she is.

TrunkSpace: Time machine question. If you could jump ahead 10 years and get a glimpse of what your career looks like a decade from now, would you take that journey? If not, why?
Shira: Nah… I like not knowing… keeps me on my toes. If there is something I like about this world that I’m in, it is that there are constantly infinite possibilities that I couldn’t even wish for before I know they exist.