Fans of HBO’s “The Leftovers” will instantly recognize Jasmin Savoy Brown. As Evie Murphy in the critically-acclaimed series, she served as the centerpiece for the puzzling drama that captivated viewers throughout season 2 before a shocking fate befell her at the start of the third (and final) season. Now the Oregon native is going from a catalyst of mystery to a mysterious character as she looks to represent the historical legacy of the enigmatic Emilia Bassano, Shakespeare’s muse, in the new TNT series “Will.”

We recently sat down with Brown to discuss how the series is bringing theater to the screen, why Shakespeare is so timeless, and how she will always be grateful to “The Leftovers” and the doors it has opened.

TrunkSpace: Your new series “Will” is due out in a few days. As you gear up for that reveal to the world, what emotions are you going through?
Brown: I’m excited. I get a little bit numb right before something comes out. Maybe that’s a defense mechanism. I kind of check out of it and forget that it’s happening, even though I know that it’s happening and I’m promoting it all of the time. So yeah, I’m excited, but I’m also kind of not feeling anything. (Laughter) When you work so hard on something and then you put it out there and everyone judges it and can bash it, that’s really vulnerable.

TrunkSpace: Everyone has an opinion in the social media age! (Laughter)
Brown: Exactly!

TrunkSpace: With the shorter season orders that a lot of TV shows are working with now, it must make it feel a bit more like a film in terms of roll out because you’re done shooting by the time that it airs.
Brown: That’s true. We wrapped in March, so it’s been a minute. It was nice because the premiere was just a couple of days ago and the whole cast, the producers, writers, and directors met up in New York to have the premiere party. It was nice to see everyone and that made it more real.

TrunkSpace: So much of the content that’s being produced these days is often based on something else and a lot of that stuff is starting to feel the same. On the other hand, “Will” is obviously based on something else, but it feels wholly original at the same time.
Brown: Yeah. It’s interesting. It is really cool.

TrunkSpace: You have an extensive theater background. Did the series have an extra layer of interest for you, doing Shakespeare in this way, having worked on the stage so much in the past?
Brown: Absolutely. I thought it was really interesting that they would mold those together. You’re going to get to see theater and pieces of theatrical productions on screen. You don’t mix those two very often. It’s not just a recorded play, which is a whole different experience than watching it in a theater, but it’s theater on screen and for TV, so it’s this whole other weird genre. It’s really interesting.

TrunkSpace: In terms of wardrobes and set pieces, from what we’ve seen, that certainly helps give it that theatrical feel as well.
Brown: 100 percent. And I was spoiled. I got to wear some of the best costumes. She has some beautiful pieces and I was pretty spoiled in that sense. 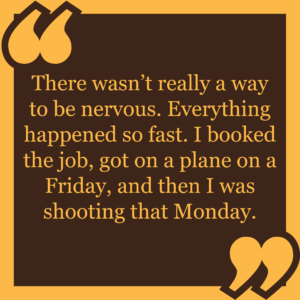 TrunkSpace: Your character Emilia Bassano is Shakespeare’s muse, but how does “Will” present her to viewers?
Brown: Well, you see their relationship develop on screen, which is very cool. Apart from Will, Emilia is pretty mysterious. People don’t necessarily know what she’s about or who she is because every time we see her, we’re seeing different sides of her. She’s very much a chameleon. She takes the role of whatever she needs to play for whoever she is around in that moment. She has to be a mistress to the Lord in order to survive. She actually very much liked him, but at the same time she wants to do her own creative stuff. She’s just constantly changing depending on who she is around and it’s really interesting to watch.

TrunkSpace: So often creative endeavors start to feel stale and sort of frozen in the time that they were created, but Shakespeare is timeless. Why do you think that is?
Brown: It’s forever. I think because all of the themes he uses are just so human. Love, lust, war, family, sex, betrayal… all of those things are human things. And not that there’s anything wrong with aliens or a lot of technology, but that’s not timeless and not human, so to just look at human emotions and how we relate to one another, that will never expire.

TrunkSpace: In terms of performance, over the course of the first season, where were you the most surprised that you got to go with Emilia?
Brown: That’s a great question. Something that we’re taught or at least that is talked about a lot in acting is how much you hold back in the character. There’s so much going on inside, so much going on in your eyes, but you’re not actively showing it. You’re showing it by not showing it. All of these contradictions. And I feel like the stuff that I have done so far has been a lot more of showing my cards and Emilia can’t or she will die. She’s a woman in that period of time… she can’t just go around being herself all of the time. So having to hold so much back and be this incredibly intelligent, outspoken, progressive woman who is totally herself, but at the same time isn’t always showing who she is, is a beautiful contradiction that was challenging and I hadn’t done that before. It did stretch me and it was really rewarding and really fun.

TrunkSpace: Prior to going to that place with Emilia, did you have reservations that you could?
Brown: You know, I didn’t know anything. (Laughter) When I first booked it, I just knew that she was a real person and I had three pages of sides and I knew that I’d get to go to the UK. It wasn’t until I was on the plane flying there after I booked it that I got to actually read the script. So I had no idea. There wasn’t really a way to be nervous. Everything happened so fast. I booked the job, got on a plane on a Friday, and then I was shooting that Monday. I didn’t really have time to think about it, which was a good exercise for me because I tend to overthink.

TrunkSpace: Is that where you’re hardest on yourself as an actress?
Brown: Oh, 100 percent! And just as a human. I overthink things and I will be incredibly hard on myself. I’m working on that… just letting go and moving on and not lingering on things that took place a week ago.

TrunkSpace: When you booked “Will” it was a new show that had yet to establish a tone on set and a family within that world. How different is it coming into a new series as opposed to jumping in and doing a guest spot or reoccurring on a series that already is established and how does either reflect on performance in terms of comfort level?
Brown: Oooh. They’re so different and I love them both in different ways. Selfishly, and I would imagine most actors are like this, I want to do what I want to do because I prefer it this way. (Laughter) No one can tell me I’m wrong when no one knows what we’re doing, so we’re all figuring it out together and creating it together. It’s not so much about, “You’re wrong!” It’s, “Oh, that was interesting, but let’s try it this way.” That’s how I should think about it all of the time, but specifically on a new show that’s how it feels. There’s this excited creative energy that is just different from an established show.

TrunkSpace: And you’re all discovering your characters together at the same time.
Brown: Yeah. And that was one of the great things about this particular production. We had rehearsal and a lot of them, especially the cast in the first few episodes because they had a lot more time before they started shooting. It was a lot of rehearsing to just discover and explore our characters and who they are and how they fit together. I’ve never had that before. It just made the environment so much more supportive and creative and safe knowing that we were all figuring this out and rehearsing and discovering together.

TrunkSpace: “The Leftovers” has been praised for its final season. We’ve seen a number of outlets calling it one of the greatest series send offs of all time. How important was that show to you and your career?
Brown: Being a part of the show, in every single way… in my personal life, in my spiritual and emotional life, in my creative an artistic life, and my career trajectory, I will forever have nothing but praise and thanks to “The Leftovers.” I owe it so much because it gave me everything, including mentors in my life and great friends and different perspectives on acting. I really felt like it was a paid master class, like I was being paid to learn from the most brilliant people. That’s another scenario where I have to distance myself for awhile because in the midst of all of the buzz, I haven’t actually watched the final season. I watched the first episode at the premiere, but I haven’t watched any of the rest of it. I probably won’t for about six months because it’s just a little overwhelming. The reviews came out and everyone is praising it so much, and just knowing that that chapter’s over, I just can’t yet.