It appears to be more about creative fate than coincidence that Sarah Minnich can be seen starring in a string of period pieces. As a child, the California-born actress who first drew attention for her run as Brenda on “Better Call Saul,” always found herself playfully portraying characters living in the past.

“I used to literally play dress up all day long in period costume type stuff because it’s just what I wanted to do,” she said in a recent phone interview.

Years later, that imaginative playtime is paying off for Minnich. She can currently be seen in the buzzy western series “Godless” for Netflix and in the ripped-from-the-headlines six part mini-series “Waco,” set to premiere January 24 on Paramount Network.

We recently sat down with Minnich to discuss the pull of history on her career, how she approaches playing non-fictional characters in a semi-fictionalized story, and why the future of filmmaking is looking so bright.

TrunkSpace: In addition to you working on a string of period pieces, we have also noticed that a number of your recent projects, from “At the End of the Santa Fe Trail” to “Waco,” are based on true events.
Minnich: And you know what? I wouldn’t have it any other way.

I’ll tell you something interesting… when I was in high school and middle school, I was terrible at history. I always screwed my GPA up because of history classes, but now, in the past five years or so, I’ve started listening to audiobooks, and specifically historical fiction audiobooks. For some reason, I’ve become much more attracted to and interested in learning about history and historical events. It sort of fits right in like a puzzle with my love for doing period piece type of work and trying to explore the character and mindset of folks that used to live in the past.

TrunkSpace: Does playing someone who actually existed or portraying a fictional person who existed within an actual moment of history force you to approach finding a character differently? 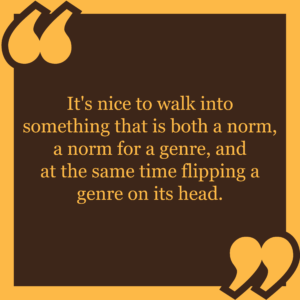 Minnich: Typically, my homework before I go for an audition is pretty extensive in terms of researching. Obviously the homework is fairly extensive for any piece that you go in for, but for period pieces, you want to look at the era. You want to look at personal accounts from people that lived in that era. For roles that are based on actual people, that becomes even more difficult because it sort of becomes a process of trying to actually capture that person’s essence, which is friggin’ hard! Then, you run into issues of, “Well, what if you don’t capture it right, and they don’t like that?” It’s kind of this game of guess and you do your best to base it on what you’ve learned and what you can find.

That’s another thing… you can’t always find information on the people that you’re attempting to portray, so you sort of just got to put your best foot forward and go with what the director asks from you, and rely on your instincts, but at the same time, rely on the direction you’re being given.

TrunkSpace: When you’re working on a project that is based on real events, does the vibe on set take on a different feel?
Minnich: When you’re portraying actual folks, it becomes more of a legal concern because they want to do their best to portray the facts, but at the same time, there’s a certain amount of liberty taken when writing about historical events because you weren’t there. I wasn’t there. I can’t say exactly what happened. So on the production that I recently worked on with “Waco,” we had to be really sort of careful in how we portrayed things because you don’t want to step on people’s toes and you don’t want to portray it incorrectly.

TrunkSpace: “Godless” is really turning heads and seems to be quickly becoming the latest water cooler Netflix series that everyone is talking about. For a lot of people, westerns are more of a brand than a genre. If they dig westerns, they are willing to give a new one a try, much in the same way that science fiction fans are. When you were doing something like “Godless,” did it feel like you were working on a series that was automatically going to have a built-in audience?
Minnich: Well, because I was working with Jeff Daniels, and because the show was a Netflix show… right there is your built-in audience. Yes, it’s a western, genre-wise, so yes there’s a mass group of people, just like you said with sci-fi, or just like maybe with romance or heavy drama or dramedy, of a built-in audience, people who are attracted to those kind of shows. What was so great about “Godless” was that it kind of flipped it. Westerns are typically male-driven. Yeah, you have Jeff Daniels as one of the main leads, so there’s a strong male figure in that production, but then you have quite a few females who are playing strong, independent, stubborn-minded type folks, and that’s sort of flipping it on its head. So some people who are normally attracted to westerns are like, “Whoa, what is this?” Some people who aren’t normally attracted to westerns are like, “Whoa, what is this?” It’s nice to walk into something that is both a norm, a norm for a genre, and at the same time flipping a genre on its head.

TrunkSpace: And you touched on this a bit, but when you’re going into a project with that caliber of talent both on screen and behind the camera, while also being a Netflix show, you’re going to get eyeballs on it right out of the gates.
Minnich: Netflix isn’t playing around. If you’ve seen some of their new projects, some of their newer stuff, they are bringing it to the table. Netflix used to be more of this sort of thing where you’d go, “Oh, you know, I’m bored, I’ll stick this on. There’s gotta be something on it.” Now, they’re competing. They’re putting out projects that are literally competing on a bigger scale that are gaining an audience. Like “Ozark?” Holy moly, that was an epic show, and who expected that to come out of Netflix?

TrunkSpace: People keep calling this the Golden Age of Television. For someone working within this time period, is it exciting to see television taking this dramatic, character-driven turn?
Minnich: It really is. It’s interesting and sort of surreal for me to sit back from it and be like, “Whoa, this is an era. I’m living in an era because looking back on this time period in 20 years, in 30 years, we’re gonna be like, ‘Oh, that’s when TV sort of was turned and we started to see diverse-driven projects. We started to see female-driven projects.’” And then we have the whole legal stuff that’s going on right now in the industry. This is an interesting time. Although our country is going through some major changes in terms of administration, it’s going through a different sort of renaissance in the film and television industry.

I’m really glad to see shows bringing on leads who are of different, sort of the non-heteronormative, non-stereotypical skinny, white female or strong, tough white male. You’re not just seeing those as the leads. You’re not just seeing these typical type of stories. You’re starting to see the perspectives of other types of folks, of the non-represented, people who haven’t been represented in the past 50 years in filmmaking. So in that sense, that’s beautiful, and it’s great in the film industry because it opens up so many doors and now we can represent those experiences and start to explore those and talk about educating the masses. What I did my master’s thesis on had to do with entertainment based education. I looked at how we could educate people using entertainment, using film and television. Look at what we’re doing now. We’re starting to pull out non-normative experiences… well, what they consider normative… non-normative or considered normative experiences and bringing them out into the light. That’s how we educate the masses in this day and age, so I think it’s great.

TrunkSpace: And while it’s exciting to see it happening now, the real impact will probably be felt in the work of the filmmakers of the future who gr0w up in this particular media age.
Minnich: Oh yeah, I can’t even fathom it. Sometimes I just have to not even imagine things because I don’t even know where that can go. We look at the generations who are younger than us, and we’re like, “Wow, dude, you’re gonna be tapping into stuff that I don’t even conceptualize at this stage.” Just like my parents or your parents who can’t really understand how to set up their Apple TV and they have to call us and have us do it for them – imagine what our kids are going to be doing?

TrunkSpace: It seems the mediums have flipped as well. Earlier generations looked towards film as the true art form, but now it seems like television is becoming that, while film becomes a mostly popcorn-driven media.
Minnich: The demand for content is so insane. The whole concept of binge watching was not around 10 years ago. That was not around 20 years ago. And so now all of a sudden there’s a demand for content, but not only that, there’s a demand for good content. So like I was saying, Netflix is rising to the occasion. That’s just going to continue to move forward. I think the whole TV concept, the episodic concept, people like that because then they have something to look forward to. They’re like, “Oh okay, I watched this episode, and now I can sort of mull this over in my mind for the next week until the next one comes out.” I think for some reason, that’s really attractive to people. They like to have stuff to sort of chew on during their work week.

TrunkSpace: When you look back at your career thus far, what was the turning point for you in terms of more doors opening and more opportunities presenting themselves?
Minnich: I think it might have been “Better Call Saul.” I don’t have a massive role on “Better Call Saul,” I have a recurring small role, but there is something to be said about having a show like that on your resume. So that got doors opened for me that would not have been opened. It’s like this trickle effect – one big thing, which really isn’t that big in terms of what you’re doing, but it’s a big name, and one big name opens a door for you, and then all of a sudden, you get to do this other thing. You do this other thing, and that opens a door. You do this other thing, and that opens a door. So, even doing these teeny little things on big movies or big television sets have opened doors so that finally I’m doing supporting roles, and finally I’m reading for lead roles. In the past 12 months, I’m finally auditioning for lead roles, which is like, “Hallelujah!” So, I can’t pinpoint an exact turning point for you, but I can say that one thing has led to another in a very step-by-step kind of way.