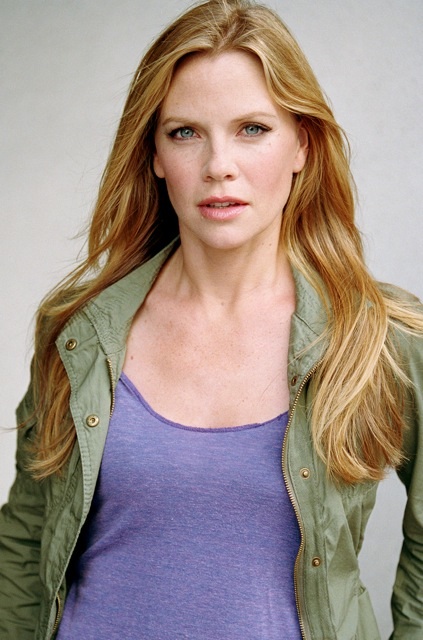 Premiering this Saturday at 9 pm ET/PT is the romantic comedy “Love Struck Café” starring Sarah Jane Morris and Andrew W. Walker. We recently sat down with Morris to discuss what drew her to the character, why she enjoys the breakneck pace of television production, and how oftentimes rekindling an old romance means having to accept a lost love for who they are now as opposed to who they were in the past.

TrunkSpace: “Love Struck Café” premieres this Saturday on Hallmark Channel. Do you have any rituals for screening your projects when they first debut?
Sarah Jane Morris: No, not really. I’m trying to just get the word out as best as I can so that people see it. This is actually my first Hallmark movie. It’s one of the first things that I’ve done that I feel like my kids can watch. (Laughter) Although, they don’t want to see me kissing anyone. They’ll have to duck out for at least one part of it.

I’m going to do some live tweeting, and I actually have a couple of friends that might come over and watch it. Every once in a while I’ll do that. I’m excited.

TrunkSpace: One of the things that Hallmark is so good at is painting the picture of a particular season…
Sarah Jane Morris: Which is always fun when you’re shooting winter in the middle of summer. (Laughter) This was actually not too bad. We were doing fall. We were late summer shooting for fall, so it was light jackets and sweaters and stuff, but I wanted to burn my coat by the end. (Laughter)

TrunkSpace: You mentioned how “Love Struck Café” was your first Hallmark project, which are known for having fast-paced 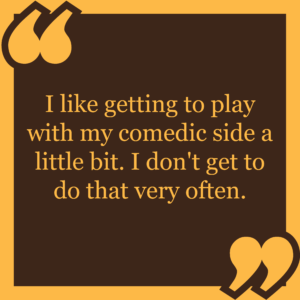 production schedules. Did that force to alter your approach as far as performance was concerned?
Sarah Jane Morris: Oh yeah. It’s funny, I was thinking about that a lot when we were shooting this movie, which was 15 days. There were some big, huge budget features like “Deadpool” that were shooting in Vancouver at the same time as us. We had one day where it was kind of a big scene, so it took most of the day to shoot. I was like, “Man, I don’t know if I would be super excited to be spending a week on one chase scene in a movie.” (Laughter)

I think I kind of love the breakneck pace of television. You have to come in really prepared, which isn’t always easy because sometimes you’re not getting the material until right before you start shooting, or it changes right before. But you’ve got to kind of come in and be prepared and ready to have curveballs thrown at you, and be able to change it up on the fly. It’s challenging in a different way.

TrunkSpace: Being able to wrap a project in 15 days as opposed to three months also gives you time to pursue other projects and characters, which must be nice?
Sarah Jane Morris: Oh yeah, definitely. For me, it also gives me a lot of time to spend with my family. I’m a nearly full-time mom when I’m not working. I feel really lucky that I can go and work, fast and furious to get it done, and then come home and be with my family. I can be the mom that I want to be for them, and that they want for me to be, but they still get to see me as a working mom.

TrunkSpace: From a performance standpoint, what was it that drew you to the character Megan Quinn in this particular movie?
Sarah Jane Morris: Most of the stuff that I’ve done, I feel like in the past leans towards the pretty heavily dramatic. With some of “The Night Shift” I definitely got to play up a little bit of quirkiness with that character, but this was just fun to be kind of a goofball a little bit. I don’t know if it will come across that way in the end, with the final product, but it was a fun opportunity for me to bring my kind of goofy, weird side to a character, and not just have to play the straight romantic, dramatic actress that I often have to. Nobody was dying, so it’s kind of a nice emotional break. (Laughter) The last episode of “The Night Shift” that I shot in the summer, it was kind of an unpleasant head space to be in for that period of time, because it was a downer. This was just fun. It was nice and light. I like getting to play with my comedic side a little bit. I don’t get to do that very often.

TrunkSpace: So much of the success of these films comes down to the chemistry between the people at the core of the story. Was on-screen chemistry something that you and your costar Andrew W. Walker discussed prior to shooting?
Sarah Jane Morris: Well, it was funny, because after I was hired they told me who the male lead was going to be. I looked him up and I was like, “Gosh, I don’t know if I know this person.” Then on the first day I got there, I was waiting in the lobby with the director – we were going to walk to dinner, the three of us – and Andrew comes walking up. He walks right over to me and gives me a big hug. I was like, “Oh, okay. I don’t usually hug people I don’t know yet, but okay.” (Laughter) He was like, “No, we’ve met.” I was like, “Wait, we have?” And he starts reminding me that we actually met a couple of times, but it was 10 years ago. He and his wife are best friends with Emily VanCamp, who I was on “Brothers & Sisters” with for three years. As soon as he reminded me of that I was like, “Oh my gosh, yeah!” Then it was just like, “Okay, good people. We’re off from here!” It was great.

He’s done a lot of these Hallmark movies. I think the very first scene that we shot was a scene in the movie where he and I kind of run into each other again. I was like, “Oh, he knows how to really connect in that romantic chemistry type of way.” He goes for it and I was like, “Okay, this is gonna be easy.” I just had to let my guard down and go for it as well.

We had a great rapport. It was easy to play up the chemistry between the two characters. It was never awkward or anything like that, which was nice. We got along really well, so it wasn’t having to cycle feelings of frustration, or annoyance with my costar ever. (Laughter)

We actually did have a conversation pretty early on about how there wasn’t a ton of conflict in the writing between the two characters. We wanted to play up the conflict a little bit.

TrunkSpace: In terms of their backstory?
Sarah Jane Morris: The backstory, and just that they’ve changed – they’ve grown up and changed who they are as people. They always had a relationship where they sort of pushed each other’s buttons, even as kids. But now as adults, it’s different. He’s kind of needling me about the guy I’m dating, and the career path I’ve chosen. It’s not exactly what he let me go to pursue. I’m not really fulfilling that dream.

You want to kind of think that he’s sort of bugging her and that this may not work out. They may have changed too much for this to work out.

Find out if it ultimately works out this Saturday when “Love Struck Café” airs on Hallmark Channel!