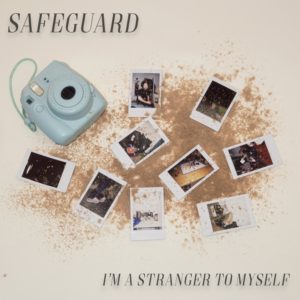 With their latest EP “I’m a Stranger to Myself” just released to the masses, UK-based Safeguard, a pop-punk quintet who played their first show only a little more than a year go, is quickly creating buzz amongst fans of their catchy, angst-ridden sound. While their single “November” is continuing to build steam, the band is looking to the future, hoping recent successes are just a precursor to a new year filled with new opportunities.

We recently sat down with bass player Zak Lonsdale to discuss the band’s growth, their plan of attack, and why he’d like to hear lots of shouting on the next record.

TrunkSpace: The band’s new EP “I’m a Stranger to Myself” landed a few days ago through Wilhelm Records. Your previous EP was self released, did having a label change the process or experience at all for you guys?
Lonsdale: I think to an extent it did, yeah. Obviously with the first EP, as soon as we recorded we were like, “Right, that’s ready to go, let’s put everything out there.” All the buildups were done by ourselves. Then with this one, we were able to take a step back and just be more concise with things, and think about how we advertise and how we release things.

I think Dylan (Frederick) has definitely helped to realize our potential and has helped us with decisions that we probably might not have made, had we not had him.

TrunkSpace: Does a part of that just mean that you’re able to focus on the creative and not have to worry about all of the stuff that stretches beyond that?
Lonsdale: Definitely, yeah. It was just us five recording the first EP, then when it came to releasing, our guitarist stepped out because he was going to do personal things in his life. We had to worry about finding a new guitarist, teaching him everything, and then doing all the promotion and booking shows, and all that. Now Dylan’s able to come in and just book stuff for us and get in touch with people. I personally feel a lot more relaxed and I can just sit back sometimes and watch it all unfold in front of me.

TrunkSpace: The band is from the UK. The label is here in the States. How did the connection originally come about? 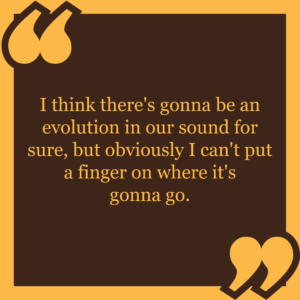 Lonsdale: When we recorded this EP, we wanted to make something of ourselves, and we definitely thought the best way to do that would be to sign to a label. We started doing a lot of research, spent a lot of time looking at different record labels, from the huge ones like Hopeless Records and Fearless Records, to the newly established ones. Then when we came across Wilhelm, we realized that although they’ve had a massive impact on the music scene since they’ve been established, we also noticed that they haven’t signed every band they possibly could, and that they only signed the bands that they think have potential. We were like, “That’s the kind of label we want, one that will push us to be our absolute best all the time.”

Dylan is absolutely amazing. He’s just done so much for us already, and the past two months have been an absolute whirlwind. It feels like it’s absolutely flown by. I just know that it’s gonna get so much better for us the next year also.

TrunkSpace: There was a time when every band or musician wanted to break out here in the United States. With the way that the consumption of music has changed, is it still important for artists outside of the States to find their footing here?
Lonsdale: I think as much as we like to think we’ve broken the UK, in a sense, we’re definitely steps away from selling out every show we play, and being able to go wherever we want and having fans. But now that we’ve got those connections in America, and we’re able to put our music out to the people over there, it’s definitely a bigger chance for us to say, “Hey, the music’s out over there if you like it,” and then if people are interested in us going over there, then it’s something we consider doing. I know a lot of us have always wanted to go to America and play shows, and it seems like the genre of music that we play, it’s a lot more prominent in the US – people care about it a lot more. In the UK it’s quite the opposite, so it’s very hard to break out over here. 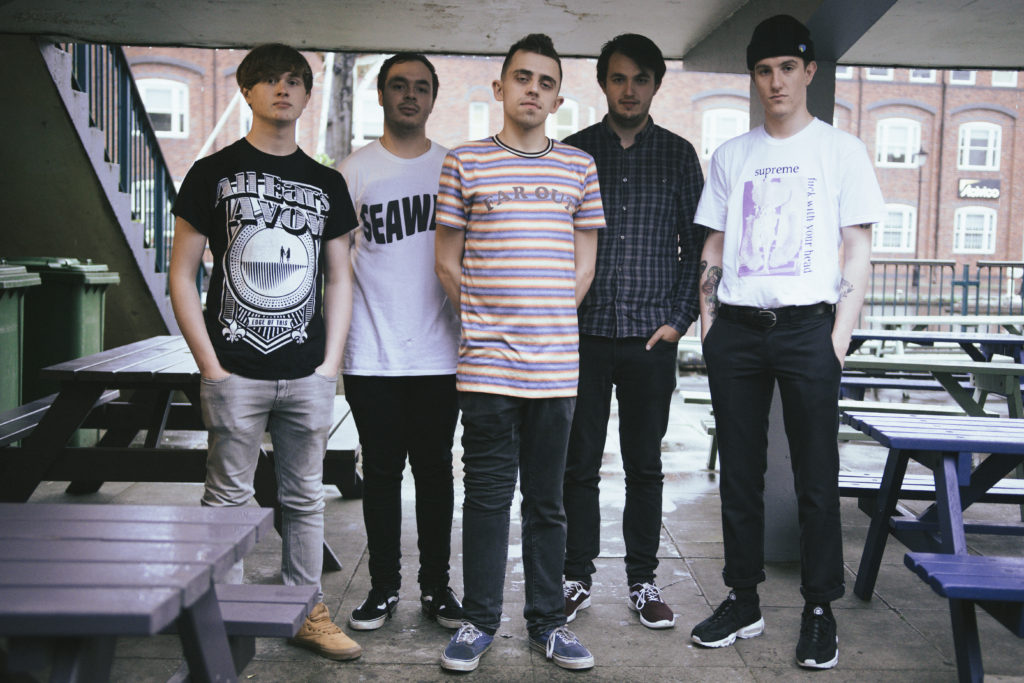 TrunkSpace: As a band who writes and performs music that would fall into the Warped Tour stable of artists, how did you guys take the news of its retiring?
Lonsdale: It was absolutely devastating. When we read about that… it was something that we had on our bucket list that we thought was very realistic, and to read something like that, it was really sad. Obviously the bucket list that we already have, we’ve ticked off so many in the past two months, and to know that there’s one that we might not be able to tick off, it’s quite sad. It’s depressing.

TrunkSpace: You played your first show in October of 2016. Has it felt like a whirlwind since that show?
Lonsdale: Definitely! That first show in October 2016, I can only speak for myself, but I was absolutely dreadful. (Laughter) I’m a self taught musician, so my bass skills aren’t exactly like Geddy Lee – more like Mark Hoppus, the early days. I do backing vocals for the band as well when I can, and my singing has taken a big step up. And yeah, we just seem to be a much tighter unit while writing more complex songs. We’re not finishing a product and going, “Yeah, that’s absolutely perfect, let’s just put it out,” we’re taking a step back and saying, “What can we improve here?”

And we’re trying to write songs that wouldn’t seem out of place on a band like Neck Deep’s discography. We’re trying to write music that you could listen to it and say, “Oh, this could be Safeguard, but it also sounds like State Champs might put it out,” or something like that.

TrunkSpace: When you listen to something like “Harbour” off of the latest EP, it sounds very polished and tight… as if you guys have been performing together for 10 years.
Lonsdale: The first EP, we recorded with our friend in his living room, and it was not professionally mastered. It was mastered by him and it was mixed by him. When we got that, we were like, “Yeah, we’re happy with that, let’s just put it out.” For what we paid for it and how much time we spent doing it, we were more than happy with the result. Then for this EP, we went to Steel City Studio and worked with Drew Lawson, who mixed and recorded Backbone by ROAM – and the quality difference, it’s absolutely amazing. It sounds like we’ve been around a lot longer than we have. I listen back to the EP every single day, just to get my head around it still and make sure I know all the lyrics for shows. (Laughter) Yeah, it’s just mental.

TrunkSpace: Have you guys creatively already moved on from “I’m a Stranger to Myself?” Are you working on material for a new EP or album?
Lonsdale: I think the next step for us might be an album, depending on how well this EP goes down, which in itself is a massive leap. Personally we all don’t really listen to pop-punk that much. I know Declan (Gough) does, who sings – he very much likes pop-punk and that’s his go-to genre. I listen to a lot of hardcore music, like Knocked Loose and Higher Power, the heavier side, and Connor (Dale) and Denholm (Horn), who play drums and guitar, listen to a lot of prog-rock and metal, and stuff like that. I think there’s gonna be an evolution in our sound for sure, but obviously I can’t put a finger on where it’s gonna go.

I’d like to have a record that’s full of shouting and breakdowns, but I just don’t see that happening, to the extent that some bands can. (Laughter)

“I’m a Stranger to Myself” is available now on Wilhelm Records.