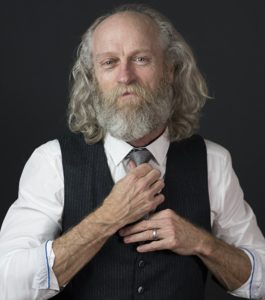 With season 4 set to drag more rotting corpses into your homes starting on Friday, we sat down with series star Russell Hodgkinson to discuss his own unique journey, how acting became a therapeutic escape, and why he never expected to have a fan following.

TrunkSpace: Doc’s fictional story aside, you have a fascinating story of your own. The first thing that came to my mind in reading about your journey was just how different your path has been from other actors. What has that path, especially having enlisted in both the Army and the Coast Guard, done to help you not only as a person but in your career as well?
Hodgkinson: I can tell you that I’m probably one of the only actors who ever earned their Actors’ Equity card while still being in the military. I was fortunate enough to perform regularly at the Fort Bragg Playhouse while I was a soldier at Bragg. Luckily for me it was peacetime, so it was a safe place to be. After my divorce, I lost custody of my daughters and I was kind of lost – kind of heartbroken. One day I saw an audition announcement and went in. That led to about three years of solid on-stage acting experience at this really wonderful, semi-professional theater that unfortunately no longer exists.

I tell you, I learned more about acting during that period working with seasoned performers than I probably would have learned 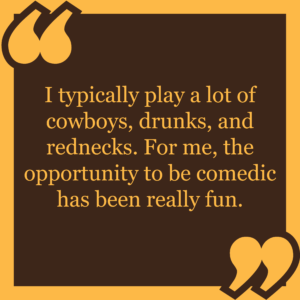 anywhere else. I did have a scholarship in high school to go to a theater, but I turned it down after my girlfriend got pregnant. The military was an obvious choice for me since I came from a military family. All three of my brothers have served. It was a safe place to be. It kept me independent and taught me discipline and responsibility, which I think every actor needs.

TrunkSpace: Did you carry the training mindset into your acting – the idea of always being prepared for whatever comes your way?
Hodgkinson: No, I never was that guy. I definitely didn’t focus on training. And I’m sure it’s super useful to study the craft and all that, but I just like on-the-job training. I would just do shitloads of community theater and whatever I could get cast in, and then that’s when I would dig in. I had child support payments and I didn’t have any extra money to take acting classes. What money I did have I soon realized would be better spent in therapy – learning about myself, processing my pain, and confronting my demons. I think that prepared me as much as any acting experience did.

TrunkSpace: So in a way the acting itself became the therapy?
Hodgkinson: Well honestly, I think for me, especially my 20s, it was an escape. I was really kind of a mess and acting was a way to mood alter. I could be somebody else. I didn’t have to be me, you know? And it was also where I found my tribe – my people. Artists, and not just actors, but technicians and set designers and just all the people involved in theater and film. I just found those to be the people that I gravitated towards. I did it for social reasons, and I did it to mood alter, and then it just kind of morphed into being something that I continued to do throughout my life.

TrunkSpace: Is it a surprise then to be sitting here, all these years later, talking about it from the perspective of heading into the fourth season of a television series?
Hodgkinson: Oh completely! I mean, seriously, if I wanted to be in television I would’ve moved to LA years ago. I just have always possessed this kind of culty ambivalence about acting. I guess my life experiences have really kind of prepared me for this moment on the show, but because being an actor has never really been the most important thing in my life, it doesn’t drive me in the way that it may drive other actors. That doesn’t mean that I’m not fiercely loyal to my character. I feel like I really know who Doc is and it’s super important that I stay true to him.

TrunkSpace: In many ways, “Z Nation” has had its own unique story, much like yourself. It hasn’t exactly existed in the same way that other shows have, and tonally, it’s very different than anything else on the air. Do you think that has helped shape the audience and fan base?
Hodgkinson: Well no, I think the fans are really responding to our dynamic as a group. Compared to other zombie shows out there, we have a clear cut mission. We try to put the fun back in the apocalypse. I think you can genuinely see that we have a real fondness for each other. I think that may be what they’re responding to – not having to take the apocalypse so seriously.

I also love the fact that we are introducing different kinds of zombies that they’re not used to seeing. If we had better merchandising, we could sell a zombie 12-pack, because we’ve got the Blasters, and the fidos, and the one’s with the bling that had the jewels all over them.

TrunkSpace: You mentioned that TV wasn’t necessarily on your radar. Has being on “Z Nation” changed your perspective of the medium as a whole?
Hodgkinson: Well, it’s really clear to me that it’s definitely not the actor’s medium. I mean, coming from theater, theater is the actor’s medium, and television is the editor’s medium. It’s wonderful to see what they make out of our stuff. We’ll shoot for five days and they just get in there and make us look great. It’s all just cutting this and cutting that, and then of course the FX, adding the splatter and the gunshots, and just bringing it all to life. That’s really where the magic happens, I think, behind the scenes really.

TrunkSpace: From a performance standpoint, has the tone of “Z Nation” allowed you to take an approach to the character that perhaps you would not be able to take while on another show? Are you able to take things a little further with Doc than you would with a more straightforward network series?
Hodgkinson: I typically play a lot of cowboys, drunks, and rednecks. For me, the opportunity to be comedic has been really fun. I mean, film-wise and television-wise, I’ve only really done serious roles, nothing very comedic. And you know, as a guest on a TV show, you’re going to come in, you’re going to do your thing, and then you’re done. But as a series regular, there’s so much more opportunity to explore as you get to help develop this role over a period of time. That adds a whole other element to it really.

TrunkSpace: This may seem like a loaded question based on how season 3 ended, but can you sort of give us an idea on where things are going this season and how Doc’s story is going to play out? What are we going to see that’s different and exciting, two things that “Z Nation” is always known for?
Hodgkinson: Well, I think you’re going to really like the new cast. Everybody died but Doc, so…

No. I’m just kidding. We actually pick up the show two years later. You’re going to see who survived and who didn’t. We all kind of separate, and we have a moment where we come together, and then the team’s back together on a new mission. What’s left of the team, I should say.

We got some wonderful new guest stars as well, Henry Rollins being one of them. I think it’s going to be a really fun season for everybody.

TrunkSpace: As someone who never expected to be here talking about starring in a television series, what has been the best experience for you thus far throughout your “Z Nation” journey?
Hodgkinson: Well, I think the best part of the “Z Nation” experience for me has been the opportunity to connect with people all over the world. The fans have really made the experience worthwhile. And the ability to bring laughter and entertainment to people has been super rewarding. In fact, I could travel to 10 different countries and I would definitely know somebody who would let me sleep on their couch. (Laughter)

I had no idea I was going to have a fan base. That doesn’t happen in theater, you don’t get a fan base. You also don’t get any respect from your family either. I’ve been a theater actor for 30 years. “Oh yeah, he’s doing that acting thing, you know.” But the minute you get a role on a TV show, suddenly it’s, “Oh my God, you’re an actor!” Then they care.

TrunkSpace: And isn’t that funny considering we just talked about how television isn’t the actor’s medium.
Hodgkinson: Oh yeah. It’s very ironic. I’ve had amazing roles on stage – big leading, fantastic roles and it was, “Eh, whatever. He’s doing his acting thing.” The first time I was ever on a TV show, I think I maybe had two lines and it was, “Oh my God!” Everybody’s calling everybody. “He’s going to be on TV! His dreams have been realized! He’s now an actor officially!”

TrunkSpace: Finally, we read that you once worked at Carvel Ice Cream as a professional soda jerk. With “Z Nation” being such a mix of genres, what kind of flavors do you think would make up a drink in its namesake?
Hodgkinson: If I had to pick an ice cream that would encompass “Z Nation,” it would definitely be Rocky Road.

Season 4 of “Z Nation” kicks off Friday on Syfy.