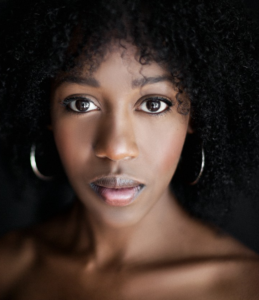 TrunkSpace: You’ve worked on multiple Hallmark Channel movies throughout the course of your career, the most recent being “One Winter Weekend.” Do you continue to return to the Hallmark Channel fold because of the people involved, because of the characters you get to portray, or a combination of both?
Bernard: I think it’s a combination of both. I enjoy doing lighthearted comedies and Hallmark gives me the chance to do that.

TrunkSpace: For the viewer, the end product – the completed film – is what becomes memorable, but for those who work on a project, there’s an entire experience involved. What for you were some of the highlights of your time on “One Winter Weekend?”
Bernard: There were a number of highlights in this movie such as eating fondue for work, figuring out how to do things while both hands were incapacitated and getting to know the cast. We’d go out after work whenever possible and it was great getting to know them. 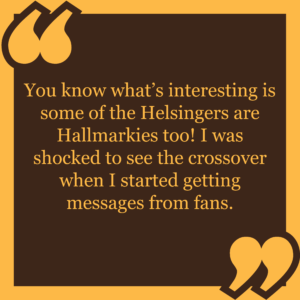 TrunkSpace: When you first got a sense of who Megan was, what initially drew you in, and did you begin to enjoy different aspects of her personality as you spent more time with her?
Bernard: When I first got the role of Megan I enjoyed her free spiritedness, which contrasts nicely with her REALLY good work ethic. It’s maybe too good to her detriment. I enjoyed her playful side and that really drew me in.

TrunkSpace: What is Megan’s journey throughout the course of the film? Did you get to tackle something within the performance that you have yet to onscreen?
Bernard: Megan’s journey is one of learning to stand her ground and go after what she wants in life. I loved that aspect of her story. I think it’s a great message for women to hear – for everyone to hear, actually.

TrunkSpace: Hallmark Channel movies continue to grow in popularity and draw massive audiences week after week, season after season. As someone who has worked on multiple productions, what do you think the draw is?
Bernard: I think the draw is they are easy to watch and people know what to expect. They’re never going to make you uncomfortable and they’ll always put a smile on your face. Now more than ever, I think we need that and I think that’s a huge part as to why the numbers are increasing week to week.

TrunkSpace: As a star of “Van Helsing,” you’re no stranger to passionate fandoms. What we didn’t realize until we started really diving into Hallmark Channel content was that the films have their own really passionate fandoms called the “Hallmarkies.” In your experience, how do the Hallmarkies compare to some of the genre fandoms like what you have experienced firsthand with “Van Helsing?”
Bernard: You know what’s interesting is some of the Helsingers are Hallmarkies too! I was shocked to see the crossover when I started getting messages from fans. It makes me laugh as “Van Helsing” is a horror show – very dramatic and tragic with lots of blood and gore – it’s vampires! And then my Helsingers will change channels and enjoy a MOW I’m in with lightness and everlasting love and lots of fun shenanigans. I love it!

TrunkSpace: Speaking of fandoms, you have made two appearances on the series “Supernatural,” a show whose fan base continues to propel it forward, currently into its 13th season. You first guested in season 7, and just returned for season 13, playing two entirely different characters. What is it is like getting to play two characters within the canon of one popular series? Although not entirely rare in the “Supernatural” world, it is relatively rare in the industry as a whole, correct?
Bernard: Yes, it is rare to be invited back onto a show and I was honored that it happened. The SPN fans are super loyal too. It was fun playing both characters who were quite different in that, though both were counseling types (season 7 I played a fraudulent psychic and season 13 I played a grief counselor), the characters were very different and had different demises – I never died in the current season.

TrunkSpace: One of the great things about “Supernatural” is that from a storytelling standpoint, it’s this perfect mix of the fantastical and the relatable. In your season 13 episode, “The Big Empty,” you portrayed a shapeshifter who was dealing with some really heavy, human circumstances and emotions. That sort of perfectly sums up the unlimited potential of acting in terms of where you can go with the craft, does it not? Getting to play a “monster” who, in the end, is the victim, is a theme as old and as relatable as the story of Frankenstein, but at the same time, it’s not something you get to do while sitting in a cubicle at an office.
Bernard: (Laughter) Yeah, it’s not an average day at the office – though if you watch “Van Helsing,” my character Doc is a “monster” grappling with finding and proving her humanity again, so maybe it is another day at the office for me. I think the constant in all the characters I’ve played is that they are presented as one thing and through the journey they go on they endeavor to change. I love playing those characters because I think people need to see that it’s possible to change if you want to.

TrunkSpace: You have received both fan acclaim and critical praise for your work on “Van Helsing.” As you look back over your time on the series, what memories bring a smile to your face, both professionally and personally?
Bernard: I have many fond memories. “Van Helsing” is my first television series and I’m lucky that we’ve been picked up for a third season. When I think about my first few days on set, I was so nervous and was convinced that I was going to get fired, but I think back on those days now and they make me laugh. I also think about the friendships I’ve made and how lucky I am.

TrunkSpace: From what we read, your mother was an art store owner. Did you grow up in a creative environment where your own creative endeavors were supported and nurtured?
Bernard: You’ve done your research. Yes, my mom owned Toronto’s first African art store and though she wasn’t an artist she was a huge supporter of the arts and really helped encourage my artistic desires. Both my parents did. My dad was a graphic artist before becoming an entrepreneur and he’s a really good singer, too. I think I get my artsiness from him.

TrunkSpace: Have your aspirations/goals changed from when you started out acting to where you are now?
Bernard: Not really. I just think my goals are more well-rounded because they now include my family and balancing my dreams and aspirations with my kids and my husband. We aim to support each other with the varying things we want to do in life.

TrunkSpace: We’re a few weeks into 2018. Did you set any resolutions for yourself in the new year and if so, how are you doing with them thus far?
Bernard: I didn’t set any resolutions. I kind of have a fear of them as they set you up for failure. However, I did decide to work out more even when I can’t get to the gym and have crafted workouts I can do at home and while I’m on the road. No excuses this year!