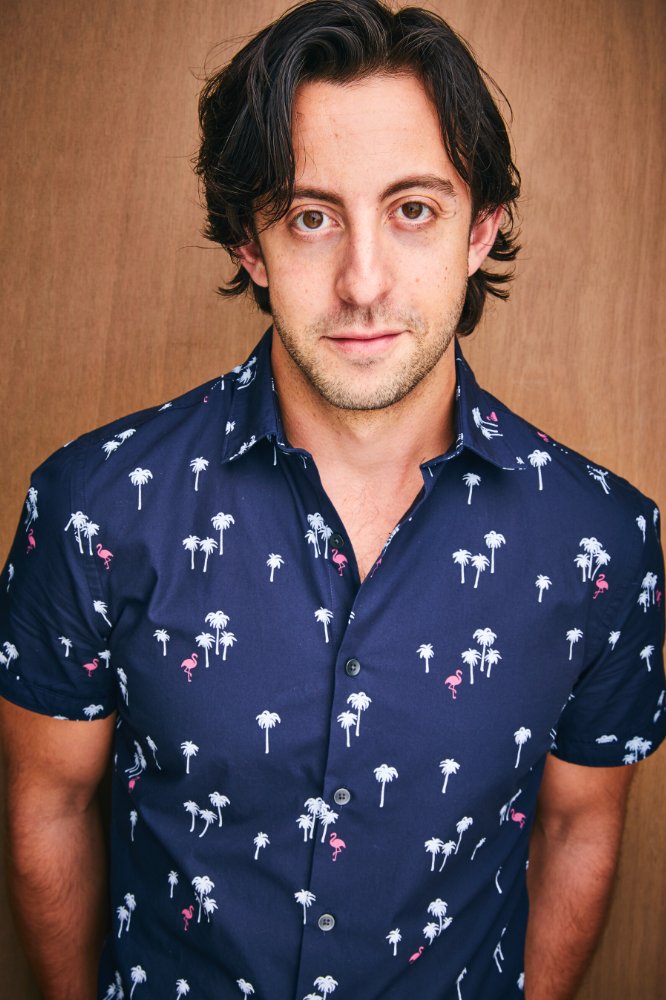 Currently, Adam Rose can be seen starring in Amazon’s “Budding Prospects” for the streaming platform’s audience-driven Pilot Program, but it’s his turn as Aaron Bass in the series “Supernatural” that has cemented him into the fold of one of the most passionate television fandoms of all time. And much like all of the other actors we have spoken to who have appeared on the CW mainstay, Rose has nothing but glowing things to say about his “Supernatural” road so far.

We recently sat down with Rose to discuss mistaken identity, the formula for creating a series that breeds a passionate fanbase, and the odds that he will return to “Supernatural” in the future.

TrunkSpace: Before we get started in the meat and taters of the interview, we have to ask… did things get weird for you when the WWE introduced a wrestler named Adam Rose?
Rose: Dude, you have no idea! (Laughter) First of all, this guy’s name was Leo Kruger and that sounds like a wrestler’s name. That makes sense. And then when he changes his name to Adam Rose, I’m thinking… that’s a horrible wrestler’s name. That’s the worst! (Laughter) And his character was so odd and kind of over the top and sort of flamboyant in a way. It was just super odd. And then he kind of blew up. He got famous and then it got really weird when he got arrested for domestic violence.

TrunkSpace: That’s right. That wasn’t that long ago.
Rose: It was not too long ago and you can imagine my surprise when I wake up and I get little Google alerts with my name and it says, “Adam Rose has been arrested for domestic violence.” And then in some of the articles, they used my picture! Not only did they use my picture, but on my IMDB… because it links to articles that you’re mentioned in… it linked to my IMDB! I had to spend that whole afternoon basically just calling these publications and calling IMDB and telling them to remove any association. (Laughter)

It was insane. And then we also had some fake Twitter beef where I said something smarmy about there being a wrestler named 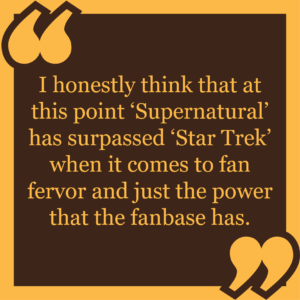 Adam Rose and he was like, “Oh, why does there have to be an actor named Adam Rose!” (Laughter) We went back and forth like that, but that was before he got arrested.

TrunkSpace: You would think that in a world of so much information, the editors of those publications would have done their homework and used the correct photos of the correct Adam Rose.
Rose: Yeah. Exactly. But, it’s been weird because he did legitimately get famous as this character and so when you Google “Adam Rose” a lot of his stuff comes up. I end up having to explain that a lot. (Laughter)

TrunkSpace: In terms of “Supernatural,” do you think that there is any other show out there today that an actor can do a guest spot on and ultimately receive the same kind of warm welcome from the fanbase?
Rose: Honestly, I don’t think there is another show on the air that has any sort of effect like that. I honestly think that at this point “Supernatural” has surpassed “Star Trek” when it comes to fan fervor and just the power that the fanbase has. It’s insane. It’s amazing. It’s insanely amazing. (Laughter)

TrunkSpace: And what’s interesting about it is that those who know the show absolutely love it and those who don’t know the show aren’t even necessarily sure what it is or if it’s even still on the air. It allows for this amazing notoriety within the fandom, but a sense of anonymity outside of it.
Rose: That’s right. There is a reason why they call it the Supernatural Family. The SPN Family. And maybe it’s because the two main characters are brothers. I’m not really sure what caused that dynamic, but there really is a sense of that once you’re in the family, you’re in the family. And it is this sort of inside thing. It’s a club that seems to be growing and growing and growing. It is the base that started any sort of following I had on social media and everything has sort of grown from that.

TrunkSpace: Which proves the power of a fanbase to keep a show on the air for what will now be 13 seasons in the case of “Supernatural.”
Rose: Absolutely. It’s completely thanks to them. The amount of success people have garnered as a result of that show… even people that just pass through… it’s because of those fans. It’s because of how loving and welcoming and just into it these fans are.

TrunkSpace: And your character Aaron had something like four years between his first appearance and when he returned, right?
Rose: That’s right.

TrunkSpace: Which for fans is very exciting because it literally creates a universe where any of their favorite characters of the past can return in any given season.
Rose: No doubt about it. And the other thing is, that kind of stuff wouldn’t happen without them. They really get to steer the show in a lot of ways. Granted, there are amazing writers always working on it, but they really do listen to the fans and the fans get to throw in their two cents into what happens in that universe and which characters they embrace. It’s very collaborative.

TrunkSpace: You also appeared on “Veronica Mars,” which was another fan favorite show that became very collaborative with its audience. From your perspective of working on shows with such strong fandoms, what is it that ropes an audience in and takes them from viewer to passionate viewer?
Rose: Man, that is a good question. I think if I had the answer to that question, I’d be a millionaire. If I had to guess, I would say the link between those two shows… and they both do have a really great cult following… I would say there’s an element of, again, family that goes into it. Feeling like you’re a part of the family. And obviously, when people watched “Veronica Mars,” they felt like they were a part of that crew. These characters feel like best friends to them. Or brothers and sisters, if you will. I think it’s that, but it’s also good writing. It’s relatable characters that you really feel like you know. It’s a relationship to pop culture also. “Veronica Mars” was really good about that and that’s just a result of Rob Thomas, the creator of “Veronica Mars,” and how brilliant he is when it comes to creating these universes and creating the way these people speak. When I was doing “Veronica Mars” I was constantly making references to “Babylon 5” and things like that. It’s little things like that that make people feel like they really know these people and that they’re on the inside. As a result, it creates this cult fanbase.

TrunkSpace: You mentioned that family dynamic, but from what we understand, that also goes for the actors themselves because everyone we have spoken to has said that when they arrived on set, they instantly felt like they were a part of the established tone and working environment that is “Supernatural.” Did you experience that same feeling of being welcomed into the fold?
Rose: Absolutely. I think a lot of that has to do with Jared and Jensen because they’ve been doing this for a long time and so they’re pros. They’re not just brilliant at doing their jobs in terms of acting, but they’re also really adept at making people feel comfortable and welcome on their set. It really all starts with them and then it trickles down from there. Because they’re so willing to welcome people with open arms and joke around with them and prank them and stuff like that, I think that just makes people feel comfortable and it makes people drop their guard and as a result they do a better job. 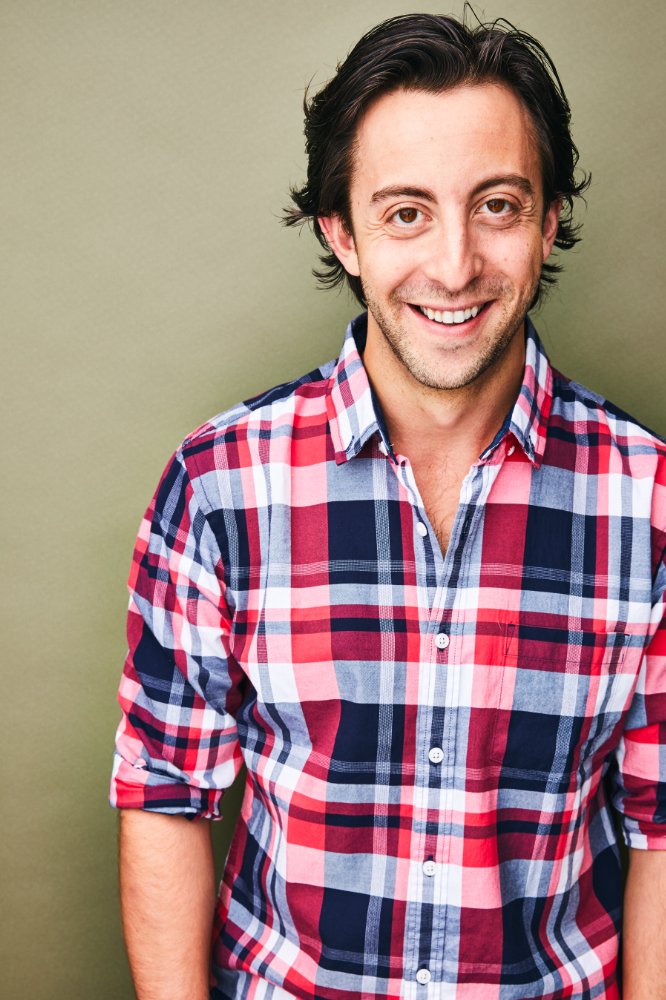 TrunkSpace: You starred in the pilot “Budding Prospects” for Amazon’s Pilot Program. That is a program that is being driven by what will ultimately be new fans of new universes. What has that experience been like for you so far in terms of having an audience ultimately decide if a series lives or dies?
Rose: I think it’s pretty amazing that Amazon does that. I definitely think that it is where things are headed, where audiences get to have a say. We have the technology now to make that possible and I think the days of a handful of people who work at a network or a studio sort of guessing what people might like or not like… if there’s an alternative, I don’t see why people wouldn’t take advantage of it. There’s a certain amount of market research that goes along with that that can only be beneficial. That being said, just to play devil’s advocate, I think some shows need an episode or two or even a whole season to really find their groove. Some of the best shows that have ever been on the air, including things like “Seinfeld,” the first season really didn’t find its audience. And “Seinfeld” didn’t even really find its tone until those four actors started to mesh and they knew each other and grew comfortable with each other. Beyond that, the writing started to fall into place as well and I think by the second season they found their groove and it became the juggernaut that it is. So, there is an up and a down to that system and perhaps there’s some happy medium there.

TrunkSpace: So can fans of “Supernatural” expect to see your character Aaron return?
Rose: There has definitely been discussion. They have talked to me about it. I’m definitely up for doing it and I think it’s just about figuring out how Aaron fits into the story. And then it’s also a logistical thing, seeing if me and the Golem (John DeSantis) are available at the same time to come and do an episode, although he didn’t show up in the second episode that I did. So there are a few factors involved, but I definitely wouldn’t lose hope seeing Aaron again.

TrunkSpace: The Winchesters have so few allies left after this season, they are going to need you.
Rose: That’s the thing, he’s one of the only people still alive! (Laughter)