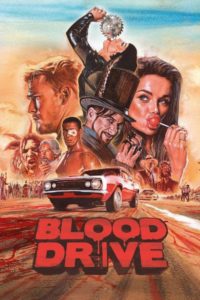 This time out we’re chatting with James Roland, creator, writer, and producer of the SyFy series “Blood Drive.” We recently sat down with Roland to discuss the psychology of the series, how he was able to shoot the show as a hard R, and why Arthur Bailey is a Frank Capra character stuck in a Roger Corman world.

TrunkSpace: The characters you have created for “Blood Drive” really help build out the world. Each one is a layer to a very tasty cake.
Roland: We got lucky with that, man. It wasn’t lucky, I should say. We had casting directors working their asses off. We had a hell of a cast. It was impressive.

TrunkSpace: And that cast is so diverse in terms of backgrounds.
Roland: Yeah. Marama is from Malta. I have never met another human being from Malta.

TrunkSpace: She has a very unique accent.
Roland: It’s amazing. We met Marama over tape because we were already in South Africa prepping by the time she was cast. So we were looking at these video submissions online and her video submission popped up with, “Hi, I’m Marama Corlett, and I’m over 18 years old.” We were like, “Whoa! What is that about?” We were a little weirded out. (Laughter) She gave a great audition and she ended up getting the part. I learned through this experience that actors are supposed to give their measurements, like their height, their weight, and all that comes with it. She shows up on set and she doesn’t even come to my shoulder. She’s so tiny and she has kind of a baby face, so she looks like she’s 10 years old. I’m like, “Oh, that’s why! We just thought you were kooky!” (Laughter) Of course, she’s all paranoid because she’s like, “I’m so much shorter than Thomas.” And I was like, “This is the one show where that doesn’t matter, and actually helps.”

TrunkSpace: There’s that one scene where she’s kneeling down near his foot and it’s as big as her head. 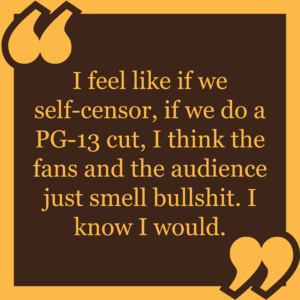 Roland: Yes! I know. It allowed for these amazing shot dynamics and forced directors into more interesting framing, actually. The code is that you’re supposed to get them within a reasonable distance of height of each other so that you can do over-the-shoulders very easily and move quickly. We just didn’t have that. It was pretty cool.

I can’t remember what episode it is where he picks her up, but it was amazing to watch on set because it was like she might as well not have been there. He’s so ripped. It was like, TINK… like putting a little teacup on the counter.

TrunkSpace: The size difference really works because she is the one in control, which gives it this crazy, “Blood Drive” dynamic.
Roland: Yeah, it actually is pretty cool. It brought a lot of psychology, I think, to the forefront of that dynamic because you start to go, “Why isn’t he…? Why can’t he…?” I’m sure she’s got all these super powers and stuff like that, but you start to really go, “Oh, this guy wants this on a certain level.”

I had a scene written that we never got to shoot that really hit that kind of on the head. We ran out of time, but it would have been amazing because it really was something that we saw on the page. We talked a lot about the psychology, about why he lets these things happen, and, of course, at a certain point he can’t get out. It’s because he’s physically trapped.

They brought it out in their performance, in their dynamic, and using their body types as part of that too. It was really amazing. It’s been cool to see people dig into that storyline like I kind of knew they would. At first they’re like, “What the hell is this about?” And then you start to see it unfold over time. It’s one of my favorite parts of the show. 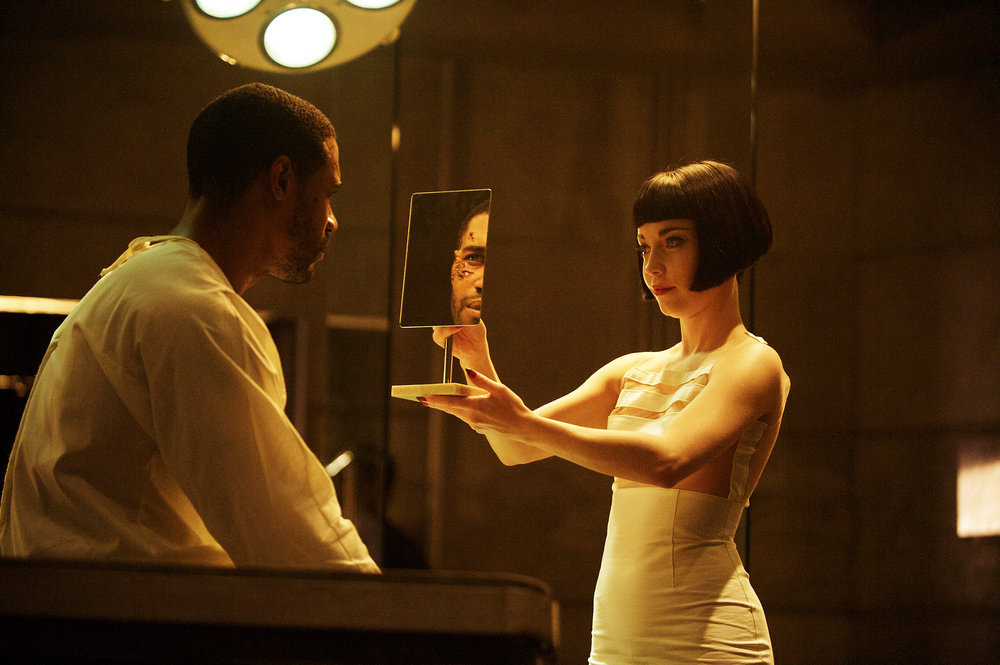 TrunkSpace: You mentioned stuff that was on the page that didn’t make it in. That being said, how the hell did you get the stuff in that was on the page?!?!
Roland: (Laughter) SyFy held true to their word. They said, “We want you to push it.” But I don’t think when they said that they knew what they were getting into. (Laughter) Obviously stuff is censored with the censor bars and stuff, but we went into it saying, “I don’t want to shoot the PG-13 version and we don’t have time to because that doubles your amount of shooting time on certain things and it’s confusing, it’s a pain in the ass, and we don’t have time to edit two different versions.” Time is money and we were so low-budget and so fast-paced there was just no way.

So it was like, “We’re going to shoot the hard R version,” and even though technically we put the black bars on ourselves, because that was the cheaper option than farming it out to some company that is on the network side, we would just literally say, “You tell us what we absolutely have to have black bars over.” We’d get into a little debate with them, back and forth versions, and stuff like that, because that way it wasn’t self-censorship, right? It was the network telling us. I feel like if we self-censor, if we do a PG-13 cut, I think the fans and the audience just smell bullshit. I know I would. I’d be like, “Well, you’re saying this is Grindhouse…”

TrunkSpace: There’s also the shock value of it that makes viewers want to come back in order to see what you will attempt next.
Roland: Yeah, exactly. We treated the shock value and the craziness as… in the writers’ room we always called it a safety net, but not a crutch. And what we meant by that is that if we fuck up and don’t do our jobs to make the scenes interesting, to make the characters interesting, or we just fuck up and it just doesn’t quite meet expectations, we’ve got that craziness there as something that is interesting. But never, never did we just write a scene just to be crazy.

TrunkSpace: And we touched on this earlier, but the characters have so many layers. They’re not two-dimensional, which is another pleasant surprise for viewers who came in expecting one thing and got something else.
Roland: That was by design because when I pitched it, I pitched it on a whim as a joke. It was meant to be a silly, fake Grindhouse trailer back in 2011. I almost did it for a contest, but I couldn’t figure out how to do the blood engines, so I did something else instead, which obviously did not win. But this idea of the “Blood Drive” concept, cars that run on blood and a cross country race, all of my friends kept asking me about it. I could tell it sparked interest in people. And then when I pitched it, my manager said, “Yeah, write that, write that!” He got really excited. And then it was like, “Okay, but how do you turn it into a story?” Because it’s a “Saturday Night Live” skit. It doesn’t have legs. It doesn’t have, terrible pun intended, an engine that really keeps it going in a television format. And then I hit upon the idea of Arthur Bailey.

We named him Bailey because of George Bailey… because I wanted it to be like what happens when a Frank Capra character gets thrown into a Roger Corman movie. And then that cracked open the world, because then that set the bar. He’s a good guy, so what happens when you’re in a bad race? What does it do to you? What does it reveal about you, because everybody has dark secrets. We’re about to go on a three or four episode arc that really digs into Arthur and gets into a lot of that. 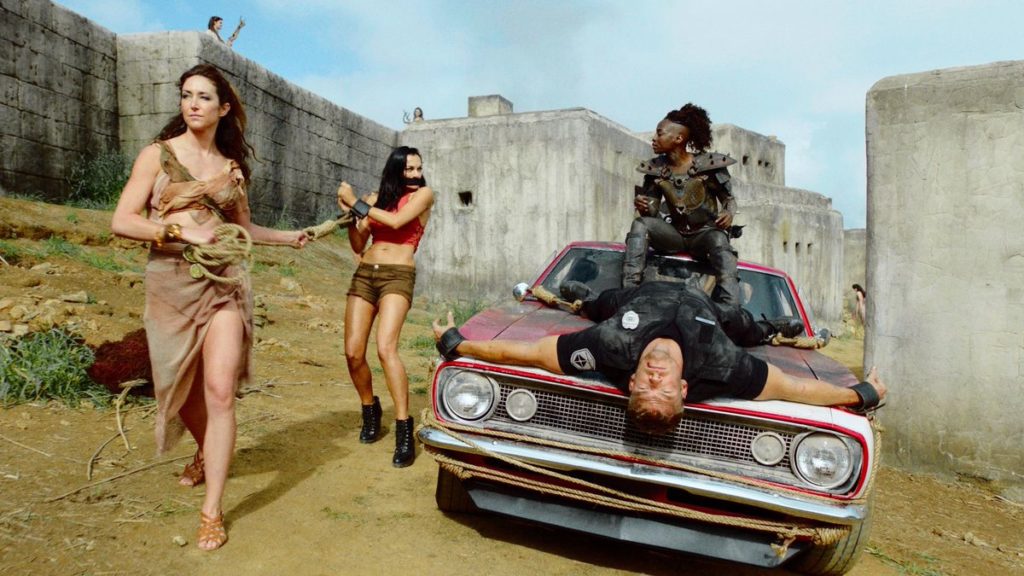 Keep in mind, Grindhouse isn’t actually a genre. If you’re going to be specific, Grindhouse is just a theater that played exploitation movies. When the movie “Grindhouse” came out, the Tarantino/Rodriguez double feature, it kind of shifted into a genre, or at least an aesthetic. So within that there are some great frickin’ movies! “The Texas Chainsaw Massacre” gets thrown into that category. It’s a masterpiece. The Blood Trilogy by Herschell Gordon Lewis is not a masterpiece. (Laughter) It couldn’t be any further from it, although I love those movies for what they are. Roger Corman is considered a shock-meister and yet his pro movies are really heartfelt. “The Intruder” is just a bold, at the time, counter cultural kind of soapbox movie. In a good way! It deals with race relations, but he doesn’t get remembered for that. He gets remembered for “Death Race 2000,” which as cheesy as it is, it’s a brilliant social commentary. So yeah, that was always the goal. Just because it’s crazy doesn’t mean it can’t have dramatic value or even meaning. I don’t think that we’re a profound show. Of course not. But every episode we did say, “What is the episode about?” If we are going to be so brash and ridiculous and kind of have this ability to say things when people are not even going to realize we are saying them because they are too busy laughing or puking or whatever it is they’re doing, then let’s do it. Let’s say something.

The second part of our James Roland can be read here.