If you are a connoisseur of animation, you have not only heard about the upcoming TBS series “Final Space,” but you’re T-minus counting down for its launch. With a cast of voices that includes Conan O’Brien, Ron Perlman, and David Tennant, the sci-fi fun fest is one of the most anticipated series of the new year.

Another animated series turning heads is “Lion’s Blaze,” a cartoon/video game mashup that recently premiered on YouTube. The story centers on a group of friends trapped in an arcade game for 15 years who are then tasked with completing an epic quest after one of their own dies within the game.

What do both series have in common? Producer, actor, and content creator Olan Rogers.

We recently sat down with Rogers to discuss why he’d like to branch out beyond animation, how he manages to juggle so many balls simultaneously, and why he always writes what makes him laugh. 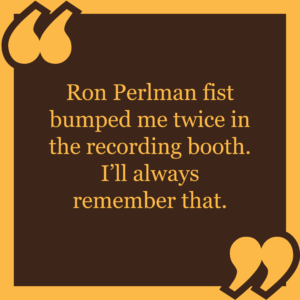 lture world is on the cusp of an Olan Rogers takeover. With a number of high profile animated projects set to debut soon, have you given any thought to entering the same (seemingly exclusive) club of names like Seth MacFarlane and Matt Groening?
Rogers: (Laughter) That would be cool, but I don’t know… that’s a hard world to crack. I’m having a blast with animation right now but the goal is to get back to live action eventually, specifically features. I have a long way to go before I even get close to where they are.

TrunkSpace: Are there less creative restrictions when you’re working in animation than if you’re working in the live action space, if for no other reason than because if you can think it, it can be drawn without adding an additional million dollars to your budget?
Rogers: Actually, it has its own restrictions like the number of backgrounds you can have and how many characters you can have in a shot. And animation is SO expensive, so in one way it’s freeing, but in another you’re limited.

TrunkSpace: “Lion’s Blaze” has been receiving incredible praise since it made its debut a few weeks back. What does that acceptance mean to you after all the years of hard work to get where you are?
Rogers: Man, it’s killer. I have been doing the YouTube grind for 12 years and never broke out really, it’s always been by word of mouth. It’s definitely huge for me.

TrunkSpace: The series follows the adventures of a group of friends who have been trapped in an arcade game for 15 years. If we were interviewing 8 year old Olan and asked him, “What arcade game would you like to be trapped in and why?” what would his response be?
Rogers: Mario most likely. I mean, gold coins and traveling through tubes? I’m down.

TrunkSpace: You’re wearing multiple hats on “Lion’s Blaze.” What is your favorite hat to wear and what is it that excites you about that side of the process?
Rogers: Directing. That’s the end goal. I would love not to do all the voices, but it’s a budget thing. Because I cannot pay myself.

TrunkSpace: When working on something like “Lion’s Blaze,” do you write what makes you laugh or do you write from the perspective of what you think the audience will find funny? Is there a difference?
Rogers: I write what makes me laugh, always. It’s more enjoyable. And yes, there is most definitely a difference. Usually, people tend not to enjoy what they’re making if it’s designed for someone else.

TrunkSpace: In addition to “Lion’s Blaze,” you also have the highly-anticipated, Conan O’Brien-produced “Final Space” due out on TBS next year. The series features high profile voice talent, including Conan and Ron Perlman. Is there a level of butterfly belly involved in gearing up to release a project of that magnitude?
Rogers: Like you wouldn’t believe. I hope people like it. All I can really do is work hard and hope it’s as special as I think it is. And I mean, voice acting with these guys has been a dream come true. Ron Perlman fist bumped me twice in the recording booth. I’ll always remember that.

TrunkSpace: One of the great things about your work is that you can have a laugh and escape the craziness of the current social and political climate. It feels like a really healthy breather from reality. Is that one of the powers of comedy and pop culture related content in general… escapism?
Rogers: I think you hit the nail on the head. Comedy and laughter melt everything away for a brief moment. We need comedy, and even if it’s just a single laugh, it’s refreshing to escape for a few moments.

TrunkSpace: You’re a Nashville guy. We love Nashville. We have fond memories of nights of remembering barely nothing while visiting Nashville. On our next trip… where do we need to visit? Give us the inside scoop!
Rogers: Pepperfire has some awesome hot chicken and then, of course, my soda shop, The Soda Parlor.

TrunkSpace: As evidenced by your last answer, you also run various businesses outside of your work as a content creator, including an apparel company. Seriously, how the HELL do you find time for everything? (We feel bad even having you answer these questions!)
Rogers: I’ve surrounded myself with great people and they make it way easier to manage multiple things. (No worries, it’s a pleasure!)

TrunkSpace: With everything that you have going on, where are you hardest on yourself… as a creative person or businessman?
Rogers: Businessman because sometimes you have to make some really tough decisions and they are not fun all the time.

TrunkSpace: When you look at your career moving forward, what else would you like to accomplish? Do you have bucket list items that you want to check off in your career?
Rogers: Yes! Directing features and telling stories with a budget that can match my imagination.