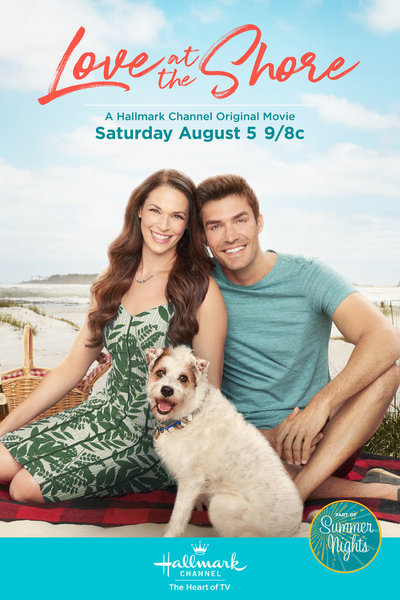 As we melt into the dog days of summer and the dread of a winter to come chills us to our sun-loving core, the Hallmark Channel is here to help us embrace what we all wish could be an evergreen season filled with the accumulation of beachfront memories. “Love at the Shore” is the network’s latest foray into seasonal programming and stars Amanda Righetti, an actress who has impressed in everything she has appeared in, including memorable roles in “Colony” and “The Mentalist.”

In slipping into the shoes of her character Jenna, Righetti was excited to step away from the heaviness of her previous roles and spend time with the lighthearted, emotionally-driven storytelling of “Love at the Shore.” Working in television over the years prepared her for the ambitious 15-day shoot, much of which became reliant on the cooperation of Mother Nature. (Thankfully the weather was mostly agreeable!)

We recently sat down with Righetti to discuss cinematic escapism, transitioning from modeling to acting, and if Jason Voorhees is as scary as a broken heart.

TrunkSpace: Hallmark is probably best known for their holiday movies, but they’re actually really great at painting the feelings and emotions of all seasons. With that in mind, what makes “Love at the Shore” a summer movie in terms of painting those feelings and those emotions?
Righetti: Well, Jenna is a novelist. She rents this summer home for her kids to go to. She’s still licking her wounds from a divorce and hasn’t really figured out quite how to move on. It hits her in a very unexpected way. There’s something very juvenile about the way she falls for Lucas (Peter Porte). It’s met with a very adamant, “No, I don’t like him. I don’t have time for relationships.” Sometimes, love doesn’t have bounds. It finds us sometimes in really unexpected places. That’s kind of part of her journey, just relaxing and letting go of control. She trying not to be as neurotic about things and allowing somebody to care for her. Especially considering the tumultuous relationship she has come from.

Nobody expects any marriage to end when they go into it, so there was a certain aspect of sheltering herself and trying to protect herself. 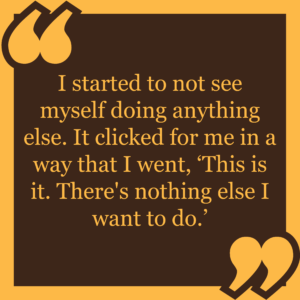 That all gets kind of cracked open. It opens her eyes to a new avenue. There’s something really lovely about that journey, and I think everybody can kind of relate to it.

TrunkSpace: Most Hallmark movies end on a happily ever after note, a theme that is actually not common in a lot of other film and television projects these days. Is part of the allure of Hallmark films a sort of a welcomed escapism for people who feel like they’re tapping into a simpler, less chaotic time?
Righetti: Yeah, absolutely. I think there’s so much heaviness on TV that just the idea of escapism, that you don’t have to worry about death and upheaval at the end, there’s something kind of refreshing about it. I think sometimes we need that. We need to be able to tune everything out and not fret about what’s going to happen tomorrow or what’s even happening today.

I think there’s some merit to that. I think we need that sometimes as an audience. Hallmark seems to have that genre pegged.

TrunkSpace: You started your career as a model. Was acting always a part of the plan?
Righetti: Yeah, it’s funny because I actually fell into modeling by way of trying to get into acting, and I guess in some ways I got derailed for a few years by doing the modeling thing, but eventually came back to it. At the age that I started, there was a lot of legal things that would have had to happen, emancipation and things like that. Modeling bought me time until I was 18 and I just could start pursuing it full time.

I wasn’t quite sure even when I did start getting into acting if that was the avenue I was going to go and then I saw myself really falling in love with it. I started to not see myself doing anything else. It clicked for me in a way that I went, “This is it. There’s nothing else I want to do.”

TrunkSpace: Once you had established yourself as a model, did you have to work your way out of the perception of being a model who wanted to act?
Righetti: Yeah, I think that’s what even happens now. I think sometimes it can be tricky. It sounds so cliché, but it’s the “pretty girl syndrome.” You feel like you have to prove that you’re not just a pretty face. That there’s more behind it. I was lucky in the sense that the modeling stuff for me happened all overseas. I haven’t done any domestic modeling, so I wasn’t really fighting against being in some Tommy Hilfiger campaign or something like that, going in, and they’d be like, “Oh wait, aren’t you the face of…?”

It wasn’t like that for me. It was a little bit different. I was doing the Japanese markets and things like that. They were sort of once removed. They kind of never coincided and crossed over with each other in that way. It wasn’t so much about fighting against the modeling as much as it was just fighting against, “Look, I’m more than a pretty face.” I never really brought the modeling into the acting that way, in terms of trying to sell myself.

TrunkSpace: You mention fighting against the pretty face syndrome. Does that also apply to the types of roles you would get offered and read for?
Righetti: Yes, absolutely.

TrunkSpace: Has that changed at all in recent years? Are there more interesting roles for women now than there were when you started your career?
Righetti: Yeah. I think even as I’ve sort of grown up in the business a little bit and because I’ve been doing it for more than a decade, the rules change, too. As you get older, you enter your mid-20s, roles are different than they are when you’re in your late teens. And even into your late 20s or early 30s the roles are a lot different. It seems like things are sort of shifting in the direction of more female-driven characters and female-driven shows. That’s exciting, and really, it’s an exciting time to be part of the business in that way. To be able to explore stuff that usually, many years ago, would have been a male playing certain roles… they’ve started to see things differently and I think audiences want to see something different too. It really lends itself to great opportunity.

TrunkSpace: It feels like the time of “desired demographics” is going to fall to the wayside and good content will just be good content.
Righetti: Well, I think people are open to that. It doesn’t matter what the role is, as long as it’s interesting and you can get behind it and you can find an audience for it. Sometimes people don’t know what they want, they just know what they don’t want. If we can present interesting characters, even if they’re female, it still is worth watching. It’s all opportunity. I think it’s exciting. It’s a great shift and I’m really pleased to see that it’s finally starting to swing in that direction.

TrunkSpace: Looking back, is there any advice you would give to your teenaged self in terms of lessons you’ve learned and wish you could have avoided?
Righetti: (Laughter) That’s a loaded question.

TrunkSpace: (Laughter) It’s a heavy question.
Righetti: Wow, you know… the list could go on and on, or it couldn’t, because I don’t know that I would change anything.

I would say to my younger self to believe and don’t doubt. “Just go for it.” I struggled with a lot of self doubt as a teenager and trying to figure out what I was going to do with my career. I think that would have been a good piece of advice to have known in my heart at that time.

TrunkSpace: Is there a particular project that you learned the most from, not only in terms of the industry but in terms of yourself and your abilities as an actress?
Righetti: Each one I’ve learned something from that unexpectedly, I didn’t really know I would have learned. But, I think that the one I take the most pride in is “Colony.” It was really wonderful to be part of such a collaborative, creative team. And to also be surrounded with such generous and talented actors. The character that they wrote gave me an ability to see so many different colors in a character. I really appreciated that. It exceeded my expectations.

Every project sort of exceeded my expectations in some regard. We didn’t think “The Mentalist” was ever going to do seven seasons. That really exceeded expectations. I never thought that I would learn how to fire a gun or do tactical takedowns and things like that, but there I was and I did. Even going back, “The O.C.” was a huge learning experience for me. I got to work with people that I grew up watching. It was a wonderful experience and those actors were all very generous as well, and very warm and loving. I was a kid. I didn’t know what I was doing and they were all just really lovely to me.

Every project has had its moments of unexpected pleasant surprises. I think most recently “Colony” was really the one that I learned the most from and I think I grew the most through. It could be just the time of my life too, I don’t know.

TrunkSpace: You mentioned “The Mentalist.” You did seven seasons and 132 episodes of that show. It must be interesting to watch a character grow and learn over a long period of time as you yourself are also growing and learning?
Righetti: Yes, absolutely. That’s a really neat thing, looking back. I think I was 24 or 25 when I started that show. I really came into my own as a woman in that show. I had a child when I was doing that show. My life changed a lot. The character was so naive and she kind of came into her own. She went through a lot of things. It’s neat just to see. It’s like the old adage, does art imitate life or life imitate art? “The Mentalist” definitely had certain aspects of that.

TrunkSpace: Finally, we have to ask… who is a better on-screen antagonist. A broken heart, which you deal with in “Love at the Shore,” or Jason Voorhees, who you dealt with in the “Friday the 13th” remake? It seems like both can be pretty hard on a person.
Righetti: (Laughter) Yeah, both can be hard on a person. I think you can be chased by Jason Voorhees and have a broken heart at the same time. (Laughter)

“Love at the Shore” premieres Saturday on the Hallmark Channel.