There is a life lesson, one rooted in expectations, hidden deep beneath the surface of the career trajectory of Ricky He, currently starring in the musical remake of “Freaky Friday” for Disney Channel and the latest season of “Trial & Error” on NBC. He never planned on pursuing acting as a professional pathway, but instead, realized it was a passion that was missing from his life after beginning college.

Even with his career-changing role in “Freaky Friday,” it was never destined that he would portray one of the leads. He had originally auditioned for a much smaller, more comedic part, but the casting directors saw something in his read that spoke to the character of Adam, the charismatic crush of costar Cozi Zuehlsdorff’s Ellie Blake.

Basically, life never goes exactly as we intend it to, but like He’s zig-zagging career, sometimes the results are even better than we could have ever expected.

We recently sat down with He to discuss awkward in-between times, why campiness is great escapism, and how putting his best foot forward lead to his biggest job to date.

TrunkSpace: With everything that is popping for you this summer, it must be a really exciting time?
He: Yeah, it’s pretty crazy. This is the first year that I have multiple projects essentially coming out back to back. Super exciting stuff.

TrunkSpace: Is there a different kind of excitement involved with a project when it’s being released, as opposed to when you’re shooting it? Does it have a different feeling?
He: I would definitely say so because there’s the excitement of landing the job, and then working on it, and kind of seeing it all pan out. No one really talks about that awkward in-between time of the movie being done, and then several months later the movie coming out, and so the anticipation in the last couple months has been pretty unreal.

TrunkSpace: Because “Freaky Friday” and “Trial & Error” are two such high profile projects, does it feel like this could be a game changing 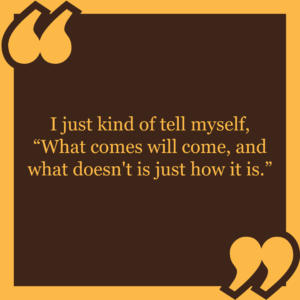 period of your career as well? It’s almost like you’re waiting on the future at the same time, right?
He: You’re completely right. The part of the anticipation is waiting to see what kind of changes will happen. And I’ve been trying really hard, and I’ve been working a lot on… especially, in the last couple months… just really connecting with myself, and also with close friends and family members, just so I know that regardless of what happens, whether or not the movie is a hit or is a success, that I’m, at the end of the day, just still me fully. I’m still just a grounded, regular human being. I’m a brother and a son before I was an actor or a Disney star, or anything like that.

TrunkSpace: Well, and when you look at the track record that Disney has, they have certainly had a hand in creating stars.
He: Right. Kind of like a personal mantra is I try to keep the expectations nice and low because if I set the bar too high, then I’ll get disappointed. I just kind of tell myself, “What comes will come, and what doesn’t is just how it is.”

TrunkSpace: We read that you almost walked away from acting. Not because you didn’t feel like you had the talent, but because you felt it might be a steep hill to climb in terms of being cast. Is that true?
He: There is so much that goes into it. I went to high school, kind of like a performance arts school. We had a really good music program, we had a really great drama program, and we had a really good visual arts program. I kind of got into the school doing the drama program, but it was never… everyone says, “Oh, I wanted to be an actor ever since I was a kid.” I really had no idea. I didn’t think anything of it. It was just a drama program that I did in high school. And come time for senior year, I kind of figured out, “You know what, I’ve got to be realistic. I’m not gonna be an actor. I should probably drop the drama program and just do what I need to do to get into school.” And that’s basically what I did.

And that detachment from it was unnoticeable at the end of high school. It was like, “Oh, yeah, I’m just not doing an elective in high school.” But it wasn’t until I finished high school, which is this huge transition – graduating out of high school and not seeing your same friends every single day, and learning how to time manage, and actually make time to spend time with friends. Just adulthood stuff – grown man stuff that you would think would come hand in hand, but it really doesn’t. It’s stuff you have to learn. That’s when I started to learn about myself that I really miss it (acting). I just felt like I was missing something, and that I needed to fulfill that to satisfy my own curiosity. I went back into some acting classes, and the rest is history.

TrunkSpace: But at the time when you were in college, you were studying psychology, right?
He: Correct. I was. Yeah.

TrunkSpace: That has to be one of those great “other” paths that actors can actually apply to acting.
He: Right, and you know what’s funny is, everyone kind of assumes that. But to be fair, I was doing Psych 101 and 102. (Laughter) It was a lot of, “Who was the founder of psychology?” Stuff like that. Part of me was kind of curious about it. I’m like, “Yeah, psychology that translates right over to acting…” But I don’t know if knowing that Wilhelm Wundt discovered psychology will really help me with my acting.

TrunkSpace: With a project like “Freaky Friday,” is it exciting knowing that because it’s an established property and brand, that you’re going to have an audience who watches regardless?
He: Yeah, there is definitely that aspect to it. But on the flip side there are also the nerves surrounding it. Now having seen the movie, and having had it screened, and knowing how well it actually is received, and how much kids and their parents even like the movie, I can say with confidence that the nerves definitely have settled. But prior to that, there was definitely nerves around the fact that it is a preexisting franchise that is so precious to so many people. People love this story, and people love these movies, and there is almost the pressure to keep true to its original form, but also not stepping on any toes. Because people love it so much, it’s easy for people to feel defensive over the previous films, but having seen how well it’s been received is very comforting because I truly believe… and it’s the same with human nature… if you give it a chance, and you watch the movie, you’ll find so many things that you love about it. Just like people, we have more in common than we don’t.

TrunkSpace: And it truly is a family movie, something that parents and kids can both watch and enjoy on a different level.
He: Yeah. For me growing up as a kid, one of my favorite movies of all-time is “Toy Story 2” and the “Toy Story” movies in general. Those are a great example, case in point, of movies that are made for kids that family members can all enjoy. And I think that’s really where we kind of really nailed it with “Freaky Friday” is that, yes, it’s a kid’s movie, but beyond that it’s also a family movie. There are real emotional moments. There is real storytelling involved. And yeah, some of it is on the campier side, but you have to remember that it’s a kid’s movie, and it’s fun, and there is levity, and it’s funny. All the good mushy stuff that people like.

TrunkSpace: When campiness is done right, as an adult, it’s great escapism.
He: Oh, big time. I mean, think about the old Adam West “Batman” series. Talk about campy, but enjoyable, right?

TrunkSpace: When you first auditioned for “Freaky Friday” it was for a smaller role. Eventually you landed the part of Adam, one of the leads. Does that kind of sum up the industry as a whole, that you can never really expect where the path will lead?
He: Yeah, definitely. This is I think something that really helped me with my acting career too. Specifically, about two years ago, I just had to change my mentality on things. Because truthfully, I’ve been really lucky that I found some really great opportunities, and in the grand scheme of things I’ve put in the hours and I’ve been working really hard, but I haven’t been doing it as long as some my peers. And I think one of the huge differences was that I realized that in all sense of the word it’s a collaborative effort. People go into an audition, and they feel like, “Oh, no. They’re out to get me. They’re judging me, or they don’t want me to succeed.” But that’s not what it is. I think of it is we’re working together between me and the casting director, and the producer, and the director if they’re in the room. It’s a collaborative effort. And sure, if I don’t book this thing, it doesn’t matter because I’m just trying to make a good impression for a future endeavor. And that’s kind of the mentality I had with “Freaky Friday” because I walked in, and I knew the character description well of the original role that I was going out for, and I’m like, “Honestly, I can play the dorky stuff, but I’m not gonna be as good as somebody else.” Look at Isaiah Lehtinen, my costar that actually plays Karl. He’s so perfect for it. And I knew that I wasn’t gonna get it, but I was gonna put my best foot forward, and just see where this would take me in the future. It just turned out to be a more immediate future.

Check listings for “Freaky Friday” air times or watch it On Demand.