“Siren” star Rena Owen felt at home in her character’s skin (even with the skin condition that was revealed!) from the outset of joining the Freeform mermaid drama, but the more time she spent with Helen, the more she understood why she was cast in the role. The New Zealand-born actress describes the character as the “old eccentric girl on the block,” but the curious behavior Helen presents also hides secrets, many of which will be unraveled by the time Season 1 draws to a close on May 24.

We recently sat down with Owen to discuss the power of being herself in imaginary circumstances, how the show evolved throughout the course of production, and why you shouldn’t be sad when an influx of unicorn projects streams out of Hollywood.

TrunkSpace: What have you taken from your “Siren” journey thus far that you’ll carry with you through the rest of your career? What has been a pleasant surprise?
Owen: I don’t know if there’s been any surprises. I think the thing that you take from every job that you do as an actress is the people – the people and the place. I’d never worked with any of the actors or any of the key creators or any of our crew, so I got to work with some really amazing people and we very much became a family. I’d never been in Vancouver before and I loved living there for four months. I think the only thing that I can add that maybe is relatively new from an actor’s perspective is the older you get as an actor, if you survive the game, is the more you realize about the power of just being yourself in imaginary circumstances. I think, as all young actors seem to do, we all want to act, but the older you get, the more relaxed you become. So that’s what you’ll get to take to the next job. You watch the old pros. You watch them and they’re just so relaxed in who they are. And that gets easier with age because you’ve become more secure in who you are and more comfortable in your own skin.

TrunkSpace: So the more comfortable you are in your own skin, the easier it is for you to slip into somebody else’s?
Owen: Absolutely. You’re just bringing yourself to that role. You’re just bringing yourself to the game. So I’m just being me, as Helen, in these imaginary circumstances, and she was a perfect character for me. Because she’s quite eccentric, she’s left of field, she’s a little bit odd, she’s an enigma, and I’m all of those things so it was really great to just… I’m perfect for the role and you’ll find that even more so as we get to the last episode.

TrunkSpace: Have you seen the “Siren” fan base grow from the premiere episode to where you are now at the tail end of Season 1? 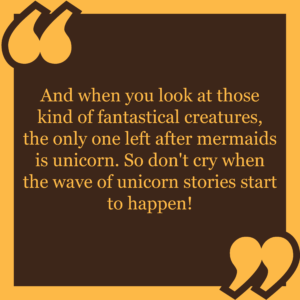 Owen: First and foremost, I’ve got to say I was incredibly grateful because I know that this is a young person’s show. You know, it’s a YA, a Young Adult show, and that’s what Freeform does. So initially from the first few episodes I was so grateful that the fans really liked Helen, the old eccentric girl on the block. (Laughter) I really was grateful that they liked Helen because most young people aren’t interested in old people. That includes my own nephews and nieces.

Quite a few fans picked up right from the trailer that I was possibly a merperson, because I know when the first trailer came out, there’s that look between Helen and Ryn, and quite a few fans then said, “Oh, I think she might be a merperson,” because another person said, “It takes one to know one.” And then there was the skin condition in Episode… well first, the behavior, the fact that she was being protective of Ryn, and people going, “Why is she doing that… I’m sure she’s a merperson.” And then the skin condition. A lot of fans did say, “I told you she’s a merperson!” But it wasn’t really until Episode 4 that it was like, “Yep, we knew it, we knew it.” And now there’s a hunger and a fascination to know exactly what her merperson history is, which you will find out. There’s some interesting little information that gets dropped in Episode 8 and you’re like, “Oh, okay!” And then there’s a lot more that you will learn about Helen’s history in Episode 10, and actually there’s another thing that kind of gets said in Episode 9 and I can’t really reveal it. But that’s the moment, this one line where I went, “Oh, now I know why they always thought I was right for this role.”

TrunkSpace: You have done a lot of television work over the course of your career, but from what we could tell, it’s been a few years since you’ve spent this much time with one character. Do you enjoy the process of discovering who a character is, in this case Helen, as you go through the season?
Owen: Absolutely. You’re right, the last TV show I did as a series regular was with Brian Cox on an Australian TV series called “The Straits.” I think we did 10 episodes. And we were meant to go to Season 2 and then ABC took a budget cut and we were their most expensive show. So, the luxury of doing a series is, first and foremost, you get to be in one place for longer than a week. (Laughter) You get to actually live in a place for four months and you get to have a routine and a life. Recently I went down to the Gulf Coast to do two weeks on a movie. You’re in and out and you’re on a lot of planes and then a lot of hotel rooms, so it really is a gift to be on a series because you really do get to have a life and have a routine. And Vancouver is a stunning place to live and work. And absolutely, more was revealed about Helen with each episode. Initially it was kind of a little frustrating because all of us actors want to know the whole story arc and everything about our characters, but they didn’t give that to us. They kind of gave it to us when we needed it, because they just didn’t want us getting locked down on certain concepts or certain ideas. I think it was a clever strategy because for us actors it kept us on the edge thinking, “What’s going to happen?” We were just like the audience, like, “What’s going to be happening in the next episode?” We wouldn’t know until we got the script, which would be often a week before we started shooting it.

So yeah, you learn new things, you evolve, and then if things were dropped in an episode and I didn’t quite understand… Eric Wald, our writer, and our showrunner, Emily Whitesell, they were always available to us if we go, “Hey, I just want a little bit more understanding of what’s the history here.”

TrunkSpace: The first season is 10 episodes long, which for a viewer is great because with these shortened seasons, there’s never any filler. It’s all A storyline stuff that you’re going to be seeing, so it keeps the audience engaged.
Owen: Absolutely. And that’s something of great value to me because I’m also a writer. And so I’m always looking to what makes things, or helps things, work. That was kind of relatively new for me where you’re working on a show that’s really evolving day by day. Or week by week. Or episode to episode. The writers are finding the episodes with their directors and then the actors come on set – you’re doing scenes and then it takes a different shape or a different course. And the gift of being able to be that flexible to a certain degree, and because I’ve been a writer, I’m more introspective, so I’ll always go, “Look, do you mind if I say this word instead of that word?” And if a writer says no, you say the words the writer wants you to say. It’s a collaborative thing and I, coming out of theater, I guess I’m lucky in that way because it is collaboration – you work with the writers, you work with your fellow actors, you work with your director.

TrunkSpace: There have been famous mermaids on the screen before, but tonally “Siren” is so different than anything we’ve seen on the subject as of yet. That has to be a big part of the appeal, at least at the outset for new viewers.
Owen: Absolutely. And when I first got the pilot, I was really impressed because it had destruction – it had the formula that we’ve all become familiar with. But its content was so original and its content was so cutting edge. Here you’ve got this really exotic sea creature and she’s beautiful and she’s an enigma. She’s just all of these things, but she’s also a top level predator and I’m like, “Oh my god!” This is like “True Blood” but with mermaids, not vampires, you know? And when you look at those kind of fantastical creatures, the only one left after mermaids is unicorn. So don’t cry when the wave of unicorn stories start to happen!