Imagine yourself pursuing a career as an actor, seeking out interesting characters and projects, and then landing a pivotal role on one of your favorite television shows. That’s exactly what happened to Patrick Cage who joined the cast of “Westworld” in Season 2 as Phil, a technician at the Sector 19 Remote Refurbishment Facility. Performing since he was a kid, the Los Angeles native describes the job as a dream come true, and it’s one he’ll never take for granted.

We recently sat down with Cage to discuss how being on the show doesn’t shed any additional insight on the plot, why that is important to him as a fan, and the reason he and his character Phil are both discovering the ongoing “Westworld” storyline at the same time.

TrunkSpace: How does one celebrate landing a gig on one of the hottest shows on TV?
Cage: I haven’t really celebrated, I guess. I mean, I celebrated that day that I found out. I had just moved into my apartment, and then I got the news that I booked the job as well. So I just kind of went on my roof, watched the sunset and cried. Tears of joy, you know? I think that was the best celebration I could have had.

TrunkSpace: What a crazy time to get the job, when you’re also in the middle of a transitional life moment like moving?
Cage: Yeah, it was actually just crazy timing as well. I was trying to move while planning a trip to Ibiza, and then it was just too much was happening. That call just kind of made everything slow down, which was great.

TrunkSpace: What kind of emotions have you been juggling with leading up to your run on the series? 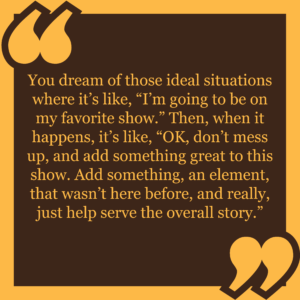 Cage: I’m just hoping that the response to Phil is very positive. People can see themselves in Phil, and kind of attach themselves to him, and see themselves in the world with him a bit more. I feel like he’s kind of everybody else – he’s one of us. Westworld is made for the 1 percent elite, the people that have a ton of money, or $15,000 a day to spend at this park. Phil can’t afford to go to the park. He works in the park. I think his mindset is just someone that’s just more normal – just one of the average people in the world going through this experience.

TrunkSpace: You were a fan of the series before you landed the part. Does that make the gig all the more sweeter for you personally?
Cage: 100 percent. It’s one of those, kind of, pinch yourself moments, because it’s things you always dream up. You dream of those ideal situations where it’s like, “I’m going to be on my favorite show.” Then, when it happens, it’s like, “OK, don’t mess up, and add something great to this show. Add something, an element, that wasn’t here before, and really, just help serve the overall story.” Because the world and the intricacy that Lisa (Joy) and John (Nolan) have put into this show is so amazing, and it’s like I just want to help them tell their story.

TrunkSpace: We have to ask… being on the show, does it help it all make a bit more sense? (Laughter)
Cage: It’s actually, it’s so interesting, because… no. It really doesn’t. (Laughter) I think there’s a ton of secrecy within the show and on set, and so it was very need-to-know based. I never got a full script, I only got pages. So as I was filming, I was learning everything Phil learned, as he learned it. It was such an interesting way to go through it. It was almost better, in a way, because I’m realizing when you have the influence of knowing the plot points and where the story’s headed, it can tend to get in your head. And you can kind of put something in there, a bit of foreshadowing that shouldn’t be in there. When you’re confused, and on the same level as your character, if you don’t understand something as Patrick, Phil won’t understand it either. And that will show. They’re just very smart with the way that they play their own game on set.

TrunkSpace: Not knowing much about the future of your character, does it then make it more difficult to make those early choices with Phil?
Cage: Well, I think that was the fun about it. The introduction scene for Phil, they laid out his essence very well for me. So I got the sense of who Phil was, and so it was just about that person going through these experiences and how they would react, really. Just, what it would be like. It was really just a fun, true game of exploration with Phil.

TrunkSpace: Because the series is shrouded in spoiler alert secrecy, does it make it kind of nerve wracking talking about and making sure not to slip up and say something that you shouldn’t?
Cage: I don’t want to slip up, but more so, I don’t want to give anything away because I think it’s so fun when we all get to figure it out as a community. I think the “Westworld” community is so large, and even with the Reddit forums and all the Twitter pages that have been made, I think there’s such a great community, and such a great connected feeling when we all figure out these big puzzle pieces together. I don’t want to ruin that. Because I feel like they’ve created a lot of those throughout this season. There’s so many things I didn’t even know, so it’s fun to find things out. Episode 1 was a trip for me. I knew nothing. I knew nothing about what went on in that, so that was all crazy.

TrunkSpace: That’s what’s kind of cool about it from your perspective. You’re involved, but your viewer side isn’t having anything ruined. You still get to be the fan.
Cage: Yeah, and that’s really the best part. It’s like I do start to see, like with Episode 1, I’m like, “Oh! I see how that’s going to tie in!” I’m starting to connect my own dots. But I still don’t see the whole storyline, and I really love that because being a fan of Season 1, I get to continue to be a fan of the show.