We sat down with O’Brien family member Meghan Ory to discuss what drew her to the series, the post-hiatus rowdiness on set, and why Jensen Ackles hit her in the head with a two-by-four.

TrunkSpace: As far as your character Abby is concerned, did you spend time with Sherryl Woods’ books or did you want there to be separation between the television world and the literary world that already existed?
Ory: Yes, unfortunately I chose not to read the books, although I can’t wait to do so at some point. I was told when we started filming that the series wouldn’t follow the books exactly and I wanted to be able to look at the series scripts with fresh eyes. Sherryl is lovely though and has been very encouraging and supportive; which is so important as I want to do this world and character she created justice.

TrunkSpace: Usually it is the genre shows that attract the rabid, die hard fans, but from what we have seen, “Chesapeake Shores” has that as well. What is it about the series that has turned people into diehards as opposed to casual viewers?
Ory: Well, that is a million dollar question! I wish I knew. We spend our time filming in this little bubble and have no idea how what we are doing will be received. It is very exciting that people are enjoying the stories we are telling and the O’Brien family as much as we enjoy making it.

TrunkSpace: Most television is high concept these days. Everything has a spin to it. What’s nice about “Chesapeake Shores” is that it feels like a bit of a throwback… a family drama ABOUT the family. From an acting standpoint, does that allow you to focus more on character and performance than something that is steeped in a high concept world?
Ory: Yes, that is something that drew me to “Chesapeake Shores” in the beginning. In the same vein as shows like “Parenthood” 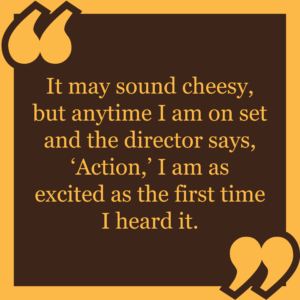 and “This Is Us,” it is really nice to be able to delve into the details of these characters. I think it allows us as the actors and the audience to become intimate with these characters and spend time with people you enjoy.

TrunkSpace: In a series about family, what was it like returning to your on-set family after the hiatus between season 1 and season 2? Is it a bit like going back to school after a summer vacation?
Ory: (Laughter) Yes, it definitely is. It is certainly quite loud and rowdy on set for the first few weeks back. It’s hard to get our work done!

TrunkSpace: There’s something else that connects a lot of your castmates other than being on-screen O’Briens. Many of you have also guested on “Supernatural.” You grew up in Canada and started your career there. Is it a bit of a rite of passage to appear on that series with it having been on the air so long now?
Ory: “Supernatural” has definitely made its way through the Canadian actor pool. My episode of “Supernatural” was quite funny actually. I worked with Jensen years before on “Dark Angel” and our characters were in love, then when I appeared on “Supernatural,” I was evil and he had to hit me in the head with a two-by-four. It was quite the reunion. I think the fans got a kick out of that one.

TrunkSpace: In the episode you appeared, “Adventures in Babysitting,” you played a vetala. In a world where everything has been done and done again in film and television, it has to be pretty cool to have played one of the only vetalas to ever appear on screen… and quite possibly… that ever will appear? That’s Trivial Pursuit question territory!
Ory: I’ve never thought about that, very true though! It was definitely a fun character to play. I always enjoy playing a good villain!

TrunkSpace: We talked previously about passionate fanbases. You spent multiple seasons on the series “Once Upon a Time.” Do you think that series/character will stay with you forever? Will people always remember you as Ruby?
Ory: I loved that show from the first time I read a script for it. You could just tell it was a very unique and special world. It was a great opportunity to get to play the same character in different scenarios of life, so it was always interesting and exciting. Once will always have a special place in my heart and as I have said, you never know when Red might pop up again!

TrunkSpace: When you tap into a passionate fanbase, those fans then want to know everything they can about you. Is it getting increasingly more difficult to maintain a private life as a public figure due to the social media/instant gratification age? How do you strike a balance between the two worlds?
Ory: There are pros and cons to everything. It is so nice to be able to connect and communicate with fans and hear how they are liking what we are creating. For me, I feel like limiting the amount of social media I have makes a difference. I had to get off Twitter years ago, but really enjoy Instagram. I think it’s good to maintain a bit of mystery!

TrunkSpace: You have been acting professionally for some time now, but what aspect of the process still excites you the most and feels as fresh as it did on your very first acting gig?
Ory: It may sound cheesy, but anytime I am on set and the director says, “Action,” I am as excited as the first time I heard it. I feel very fortunate to have a job that I enjoy going to every day.

TrunkSpace: You have played so many interesting characters over the years. Are there any that you wish you could have spent more time with and could have seen developed out further, and if so, why?
Ory: That’s a great question. I always feel a little sad every time I finish a show and have to say goodbye to that character. They become a part of your life. I would have enjoyed seeing what a second season of “Intelligence” would have looked like. I loved playing that character.

And I will always be interested to see where else Adam (Horowitz) and Eddie (Kitsis) take Ruby on Once, if they chose to. Lana (Parrilla) and I used to joke that the evil queen needed a pet wolf!

TrunkSpace: With the new season of “Chesapeake Shores” now reaching viewers, what do you hope fans will walk away with when the season finishes up?
Ory: I don’t want to give anything away but the finale of season 2 is going to shock a lot of people, I think. I hope viewers finish the season feeling satisfied and hungry for a season 3!