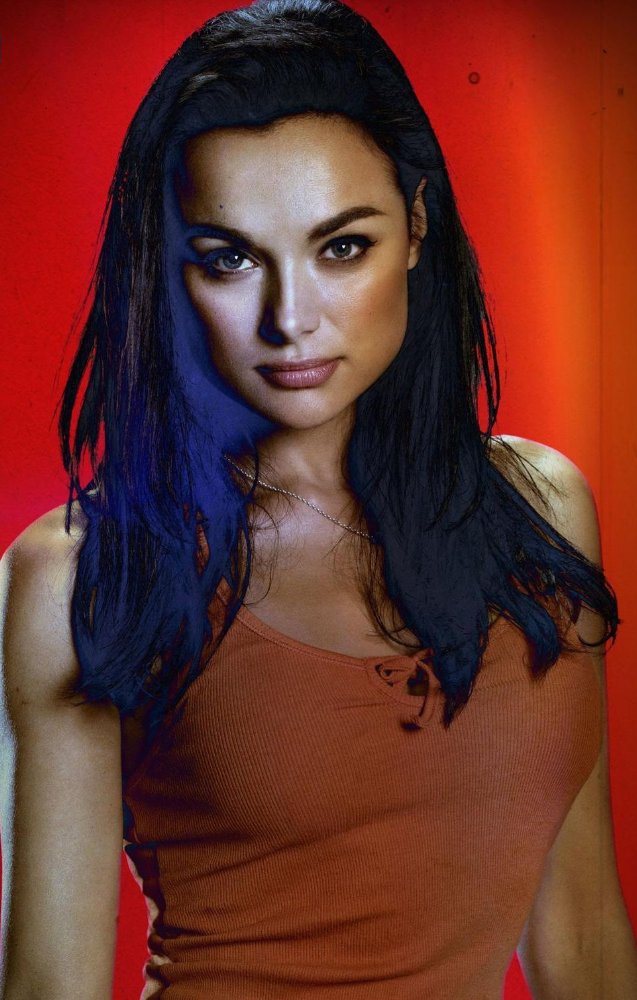 Christina Ochoa’s character Grace from the SyFy grindhouse series “Blood Drive” would be a page-turner if she were a book. Captivating in her silence and hypnotizing with her methodical delivery, the Barcelona-born actress is a revelation on screen, even when streaked with the blood of her victims within the eclectic gorefest. The fact that she feeds humans into the engine of her car can’t damper the warm and fuzzies you feel when watching her tough-as-nails performance.

We recently sat down with Ochoa to discuss the campy craziness of the series, how there’s nothing like it on television, and why she loved coming home bruised after a long day on set.

TrunkSpace: The response to the show thus far has been really positive, but we have to ask… how the hell did you guys get away with half the stuff that you did?
Ochoa: (Laughter) You know, we did not expect such a unanimous response from the audience, especially in the States. Maybe on an international level we were hoping for something fun and exciting, but we did not expect the warm response. We didn’t know if we were going to get hate mail and bashed at every corner. (Laughter) We’re just happy that the audience has tapped into the fun, campy aspect of it and is enjoying it as much as we did making it.

I think that being far away and shooting in South Africa kind of gave us license to get away with a lot and it worked. Kudos to James Roland for getting away with it!

TrunkSpace: You hear people say all of the time when talking about shows that “There’s nothing else like it on TV!” But that really is the case when it comes to “Blood Drive.”
Ochoa: We didn’t know if that was for a reason… that there is nothing like it. (Laughter) But we were very excited about taking a risk. There’s definitely nothing like it and I think that SyFy and UCP have been very brave in tackling something so different and standing behind it so much. I think it’s very brave.

TrunkSpace: From an acting standpoint, does the campy nature of the storytelling allow you to let loose and go to places that you wouldn’t normally go as far as performance is concerned?
Ochoa: Absolutely. I think Colin Cunningham epitomizes that a little bit with his role as Slink. He is masterful in the portrayal of that character. But I think in general we all went into this saying, “We have no idea what the end result is going to be.” We loved the material and thought it was outlandish and crazy and we dove in just wanting to have a blast. How could you not have fun? 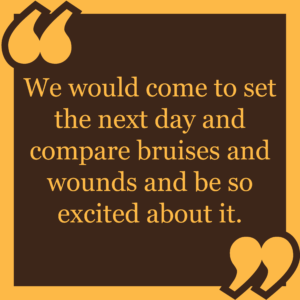 Combustion engines that run on blood!

TrunkSpace: It really is the greatest logline of all time.
Ochoa: (Laughter) Exactly!

But we had a blast. And we did have a lot of fun on set. Every episode kind of tackles a new sub genre, so every week it was something different and exciting.

TrunkSpace: Did some of the early performance choices you made for your character Grace pay off for you as you continued to play in the sandbox of those other sub genres?
Ochoa: Absolutely. I think one of the craziest things for me is that when I was reading the script, there’s a very big part of me that was like, pardon my French, “We’re never going to get the fuck away with this. They’re never going to air this. Ever!” (Laughter) So there was a freedom to making outlandish choices because we did not think that they would end up in the cut and… they did! (Laughter)

TrunkSpace: When the trailers and marketing clips first hit, the show looked crazy and cool, but they still didn’t prepare you for what you ultimately see in the final product. (Laughter) It surprises people.
Ochoa: I love hearing that. We were surprised with the characters and the stories and the layers that we get to unravel as the season goes along. For us it was a constant surprise and a shock to see the scripts, and in the best possible way, I think everybody just dove headfirst into it. Everybody! Every head of department was so enthusiastic about being able to do something so different that we just kind of reveled in that space… in that little bubble that was “Blood Drive.”

TrunkSpace: It must have been interesting even just from a visual standpoint when you started tackling those various sub genres because the look of the show changes as the season goes on.
Ochoa: Credit to our fearless leaders, in this case our director/producer David Straiton and our DP Yaron Levy, who is just unbelievable. We had amazing guest directors fly in. We had James Roday and we had Lin Oeding and wonderful people. Everyone gave their episode a flavor and they are all fans of this genre and the sub genres so they got to live out their dream by making every episode look the way they wanted to, whether that’s an 80s feel or going back to the old exploitation films of the 70s or a vampire kind of thing with 80s synths and the music being eclectic. Whatever it is that you are a fan of, you got to tap into it. 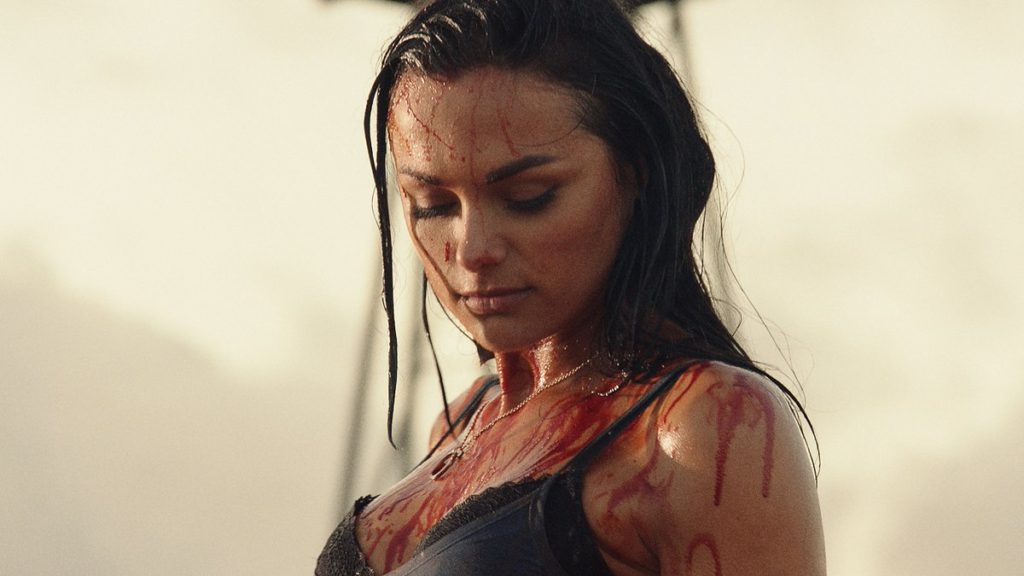 TrunkSpace: Is it a sign of the times… the Golden Age of television, as a lot of people refer to it… that “Blood Drive” can even exist right now?
Ochoa: 100 percent. I think that now, especially with the new distribution models and the caliber of TV that we are getting as an audience, because I am a consumer as much as a producer, we are able to find our material and the things we like. It’s a very open platform to any kind of product being out there because it seems to find its niche audience regardless now. It’s not as hard to find it and obviously that has a lot to do with online platforms and the internet and spreading the word and marketing it virally. I think that we seem to be tapping into a time where artists really can create their vision and count on the fact that it will reach the intended audience somehow.

TrunkSpace: Certainly in the time of there being only three networks, you were force fed what you consumed on television. You liked what you got. Now you find what you like.
Ochoa: Yes! Exactly. And SyFy is the perfect fit in this case for something like “Blood Drive” because I think that audience was hungry to see something this different and this outside of the box, within the realm of what SyFy masters best.

TrunkSpace: So much of your performance takes place in the car and you hear actors say all of the time that they need to DO something within a scene. How did you handle that?
Ochoa: Are you implying that we didn’t do enough in the car because I would disagree with you! (Laughter) At the end of episode 1 we do enough! (Laughter)

TrunkSpace: (Laughter) Agreed, but we were thinking more along the lines of the smaller performance things. For instance, an actor in an office scene may want to be twirling a pencil or stacking file folders.
Ochoa: You know, I think it might have been harder for Alan (Ritchson). As an actor, but maybe more so as a character, because he wants to actively be doing something as a hero. Arthur is itching to get out there and do something. I think for my character Grace, a lot of her power comes in observing and in stillness. She’s a very economical fighter. She’s very good, but she doesn’t come at things just swinging wildly. She’s calculated in her movement as well as in her actions and in her words. In their conversations, she doesn’t say a lot. She’s not verbose, but she definitely economizes and picks her words wisely. I think that was part of the character, so it wasn’t as hard for me as maybe Alan’s character Arthur to be in that enclosed space. 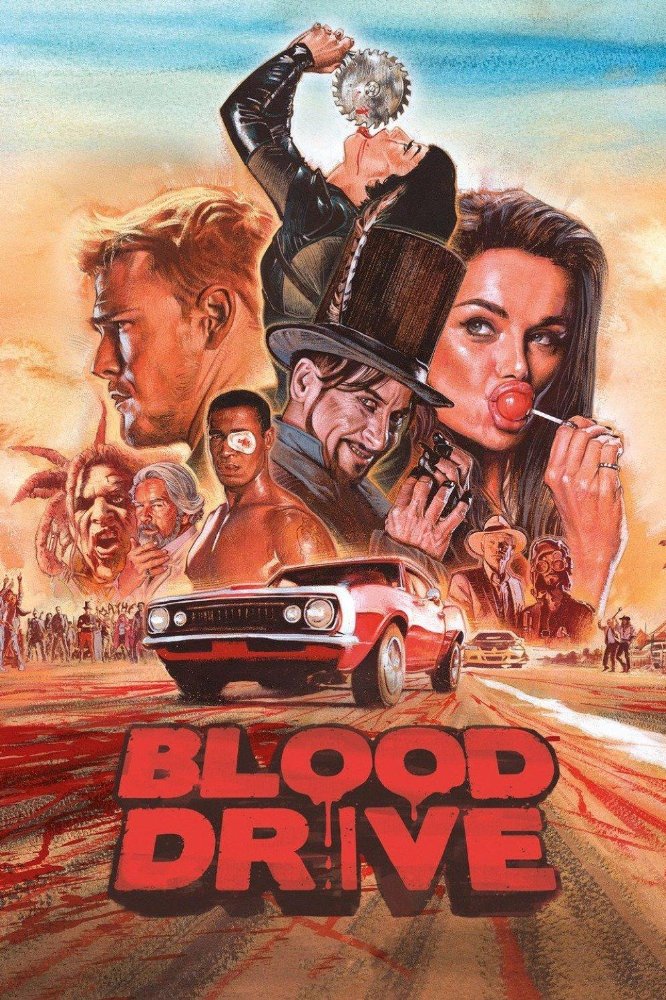 TrunkSpace: You mentioned that you shot in South Africa. Between the heat, the fighting, and the stickiness of the blood, it looked like a pretty physical shoot.
Ochoa: I have pictures that can show you bruises everywhere from practicing fight stunts and choreography. It was gruesome when it came to the physicality of the show and I also think that is one of our favorite parts. And I think I can speak for Alan on this as well… I loved every second of that. Our stunt coordinator Kerry Gregg has an amazing stunt team that has worked on “Mad Max” and “The Dark Tower” and huge, HUGE productions. They are very good at what they do, so learning how to stunt drive or fight… it was one of the best parts and one of the main reasons why this job was so appealing to begin with.

TrunkSpace: What’s great is that you genuinely sound like “Blood Drive” was a bit of a dream job. The excitement is in your voice even long after you wrapped.
Ochoa: (Laughter) We would come to set the next day and compare bruises and wounds and be so excited about it. My favorite part was coming home exhausted after a really, really long day of stunts and, not complaining but going, “I just had such a long day doing all of these fights!” It was my favorite part. You get to kind of feel very much like a warrior.

TrunkSpace: You have your own production company with a number of projects in the works. Do you hope that the buzz of “Blood Drive” is able to rub off on those future productions and bring them a built-in audience?
Ochoa: Yeah. I also think that tapping into “Blood Drive” and Grace as a character has opened up a lot of things for me, almost politically as well in terms of being involved in a project where representing a woman who is so in charge and in control of herself and unapologetic about her dark side. I think that those were things that were so much fun to tap into that the kind of roles and female empowerment roles that now my production company is developing are a direct correlation of my experiences in “Blood Drive” as well as “Animal Kingdom” and “Valor.”

TrunkSpace: So is that what drew you towards the producing and the development side of things, creating projects for women?
Ochoa: Absolutely. I’m very much a feminist. I think we all have to do our part to create the reality that we want and it was one of those things where I started to want to have an input and a say in the material that is out there. I have wonderful creative people around me where we like coming up with different ideas and stories and we are all entertainers to a certain degree. I think it’s also a part of the times. Not to get incredibly political, but it was something that now more than ever, in this climate, I believe is important as an industry and as a community of artists to tap into and take a stand in whatever way we can, storytelling being one of the main ones. So, after the election especially there’s been a big push on my end to put out content that I think has a point of view.