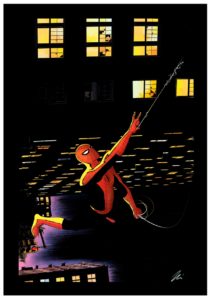 TrunkSpace: How important were comic books in your life growing up and is that where you discovered your love and inspiration for drawing?
Walter: I had the great fortune growing up that my parents were protective of what they let into our home. Computers, internet, video games, television and movies came late in life, relative not just to kids today but to most of my peers at the time. As a result, when I got my first issue of Ditko/Lee Spider-Man as a child, it was the most visually exciting thing I’d seen outside Disney animation, only it wasn’t weighed down with lame musical numbers or boring romance. It was great. I read that book until it fell to tatters and then got some more. Drawing came later when I met my buddy Andy in middle school. He was a doodler. Always scribbling in class on the back of tests, notebooks and the like. He was a comics guy too. One afternoon, bored, we got out some “Spawn” trades and tried our best to copy the splash pages. Great memory. There are a hundred small moments like it that pushed me towards comics but that was the moment I realized I enjoyed drawing.

TrunkSpace: Was there a particular artist or title from your childhood that you remember being drawn to and inspired by?
Walter: I went through phases. As a kid it was the character that counted. Spider-Man loomed large. Approaching my teen years 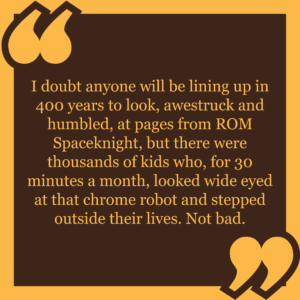 the artist started to become priority. I was big on Todd McFarlane and by extension Greg Capullo. Some Jim Lee and the Kubert brothers mixed in as well. In high school I was looking for concept so I was going through guys like Frank Miller, Warren Ellis and Alan Moore. When the “Hellboy” movie was coming out I came across Mike Mignola for the first time – promo poster or something – just a profile of Hellboy’s face. Blew away everything I had seen up to that point. Still my favorite artist. I don’t much talk about comics anymore and it’s rare I think back on reading them as a kid but it certainly strikes me at this moment just how much I enjoyed those comics growing up

TrunkSpace: How did you decide to approach your career in comics? Did you formulate a plan of how you wanted to attack what is known for being a hard industry to crack?
Walter: Mostly it was just years of grinding away to get to that point where you look down at something you’ve drawn and it isn’t the worst thing you’ve ever seen. Once I got to that point I wanted to find out what other people thought about it. I figured tried and true: take a portfolio to conventions and talk to editors. It worked. There were some premature efforts before that. I mailed in some samples and pitches. Went nowhere. Had a few writers contact me online and did some work with them that resulted in the same thing – though much of that was on me.

TrunkSpace: What was your biggest break in terms of a job that opened more doors for you?
Walter: I went to a convention and showed my portfolio to Sean Mackiewicz. He saw some potential there and shortly after offered me a job. That first job was raw but he stuck by me and after offered me more work. I’m grateful to him for that.

TrunkSpace: A lot of people say that breaking into comics is the hardest part of working in comics. How long did it take you before you started to see your comic book dreams become a reality?
Walter: I decided to draw comics when I was a senior in high school. Got my first real gig at 27. Almost 10 years. Now that I’ve gotten in, the dream has shifted. Now I’m dreaming of doing it well. Could take a lifetime.

TrunkSpace: Is there a particular character or universe you always find yourself returning to when you’re sketching or doing warm-ups?
Walter: I vacillate between characters I enjoy drawing and drawing things I suck at and look to improve. Former is mostly characters I know and grew up on and the latter is everything else, but especially women. 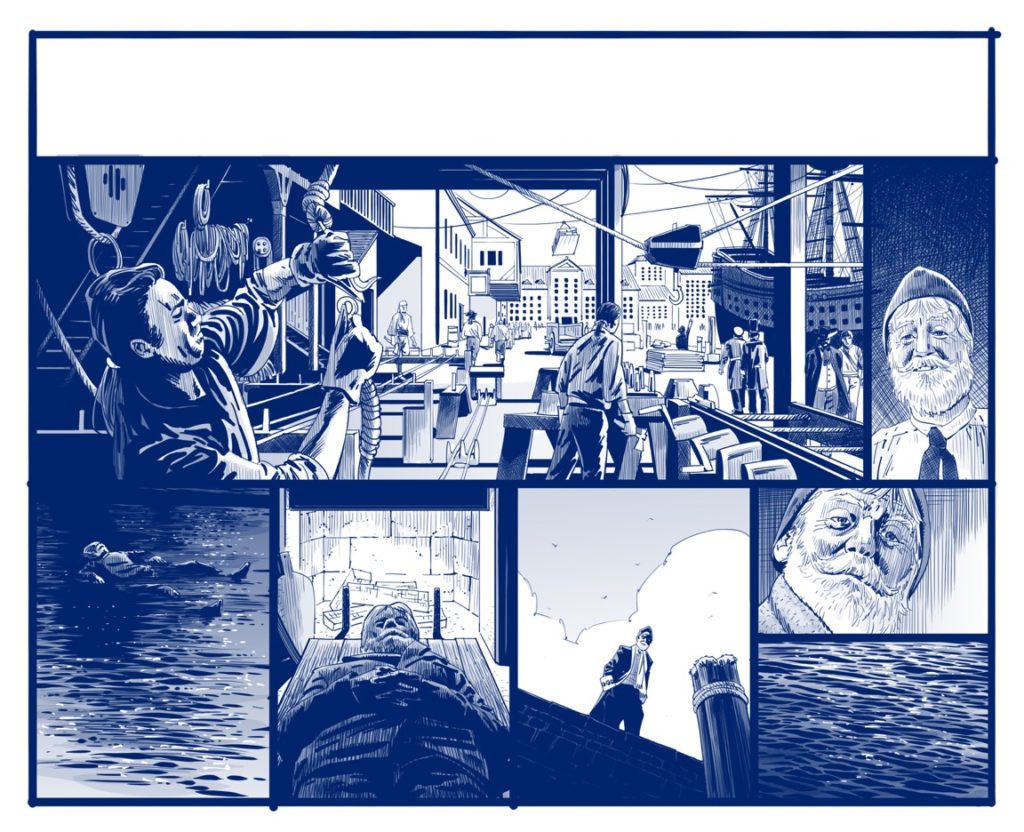 TrunkSpace: Is there a specific title or character that you’d like to work on in the future and why?
Walter: Could be but I’ve got an issue here. Take the Punisher. Great character. Skulls, guns and an opportunity to drape everything in shadows. Great stuff. Would fit with what I would like to do if I could do what I imagined. Trouble is, Parlov has drawn Punisher. And Zaffino for that matter. For me it’s best to avoid hoping for a specific existing title and if I get something, try to do it better than the last thing I did.

TrunkSpace: What is your ultimate dream when it comes to your career in comics? Where would you like your path to lead?
Walter: I’ve got an idea for a book of my own. I’ve got a character, the world that surrounds him and the makings of a plot. Filled with things I like and like drawing and very little of what I don’t. That’s the ticket. One of these days I’ll strike out and give it a shot. Other than that, if something comes my way, chances are I’m game.

TrunkSpace: What would you say is the greatest strength as an artist?
Walter: Comic art appealed to me in part because it so often lacks mystery. It’s simple, it pops and everyone can understand it. It’s attainable. I can look at a Caravaggio or Bernini all day long but I can’t make heads or tails of it. I mean how it was accomplished. I know that there were brushes and paint or stone and chisel but the rest might as well be a miracle. With a lot of comics, it’s lines on paper. I can see how it was made… even as a kid. I doubt anyone will be lining up in 400 years to look, awestruck and humbled, at pages from “ROM Spaceknight,” but there were thousands of kids who, for 30 minutes a month, looked wide eyed at that chrome robot and stepped outside their lives. Not bad. Of course, many of those kids are now adults who worship mans mastery of science and have forgotten all about mystery and miracles. Not sure how that balances out. 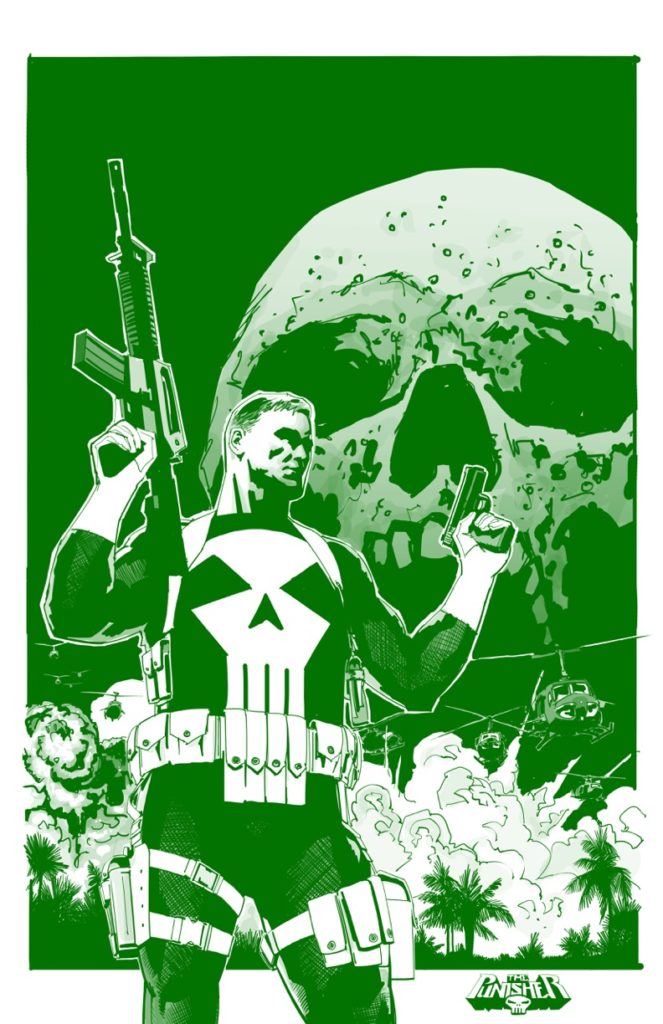 TrunkSpace: How has technology changed your process of putting ideas/script to page? Do you use the classic paper/pencil approach at all anymore?
Walter: I’m almost always working in Photoshop. Been attempting to get back to doing traditional ink on paper but I have gotten so accustomed to working digitally that it’s rough going. I know how to get the results I want digitally but can’t seem to get the same lines out of a brush. From the other side, it makes no nevermind to me at all. So long as I like the result I don’t care how the artist did it or by what method.

TrunkSpace: What advice would you give another young aspiring artist who is considering a career in the comic industry?
Walter: Difficult question. Things are moving pretty fast lately but I’ll say this – people today have a great desire for entertainment. If you stick with it and commit you might make it. Be practical. Think about pay, benefits, how much (and for how long) you will have to put in to get something out. Be aware of where you stack up. Plenty of people out there with a dream incapable of seeing their work objectively, people who may avoid heartbreak with honesty. Consider your motives and excise rationalizations if possible. Other than that, keep at it and good luck.

TrunkSpace: Making appearances at conventions: Love it, leave it, or a combination of both?
Walter: I’ve yet to do it. I may attend one to see what it’s like from the other side of the table but I went to a few conventions when I was looking to break in and I found it in no way to my liking.

TrunkSpace: What is the craziest/oddest thing you’ve ever been asked to draw as a commission?
Walter: Nothing yet. So far, fairly straightforward commissions.

TrunkSpace: What else can fans of your work look forward to in 2019?
Walter: “Gasolina” will still be coming out. I’ll post sketches regularly. If I have the time I might try my hand at something of my own. Other than that, it’s up in the air.