When Nelson Leis first joined the cast of Chilling Adventures of Sabrina, he never expected to be donning those character-amplifying Beelzebub prosthetics for long. And even as Season 2 bled into Season 3 – which is available now on Netflix – he was never quite sure if fate would see him through to the end.

“I don’t know if I could assign it a percentage but it always felt quite likely that I’d get killed off,” he said in an exclusive interview with TrunkSpace. “Low and behold I made it out of the season alive.”

We recently sat down with Leis to discuss instantaneous viewer reaction, tarantula discoveries, and why you have to swing a lot to swing for the fences.

TrunkSpace: Fans have fallen in love with Chilling Adventures of Sabrina. As an actor, what does it mean to work on a series that connects with people on this level?
Leis: It’s a thrill to be on a series that has a global audience. And it’s been fascinating to find out where there are massive fan bases – South America, for instance. At the end of the day, as an actor you hope that your work will find an audience, and that the project will strike a chord with those people, and that’s overwhelmingly been the case with Sabrina.

TrunkSpace: Is it a bit surreal to have that instantaneous reaction from fans after a new season drops, because with so many people obsessed with the series as a whole, the bingeing must be pretty intense? Can you get a good sense of its impact the day of its release?
Leis: It’s definitely surreal. I think that young Nelson, who was dreaming of one day stepping onto a film set, would be blown away that there were strangers reaching out to say they enjoyed the show. Honestly, present day Nelson is kinda blown away. The day the show launched, those Instagram followers and comments started rolling in, and honestly, I’ve enjoyed connecting with the fans. This is the first time I’ve been in a position to do so, in that it’s my first multi-season recurring role. So the experience is fresh for me. The fan base has been vocally appreciative on Instagram – I’m sure they’re vocal all-over the place, but that’s the only social media I meaningfully engage with.

TrunkSpace: Your character Beelzebub has more skin in the game with Season 3. Is the path you are on with the character the one you knew you’d follow when you first landed the role or have there been creative surprises along the way for you?
Leis: The entire process has been one surprise after another. In the first episode of Season 2 my character was banished to hell, 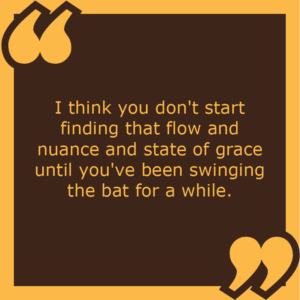 and I thought, ‘well that was fun – on to the next job.’ Then last April I found out I’d be in the first episode of Season 3. Within a few days they told me it was the first three episodes, which eventually led to six. Beelzebub’s evolution and the season storyline was revealed to me as I received each subsequent script. That story arc is kept pretty close to the vest of Roberto Aguirre-Sacasa and the writer’s room. I was like Pavlov’s Dog every time that script slid into my inbox, and I’d dive right into it. I don’t know if I could assign it a percentage but it always felt quite likely that I’d get killed off. Low and behold I made it out of the season alive.

TrunkSpace: There’s a big makeup/prosthetic component to your character. When you’re reading new scripts where Beelzebub appears, do you envision the scene with yourself looking as you would on shooting days? Does the visual aspect of the character play into how you present him on camera?
Leis: I don’t think on the initial read of the script I necessarily envision myself as I appear on the shooting day. I’m reading it more for story. In terms of the prosthetics, they definitely have an effect on how I work in the scene. There are just certain things I can do with Beelzebub because of the prosthetics, that I wouldn’t be able to do if I just looked like me. They work as an amplification tool. This latest season as I got to be in the prosthetics regularly, new aspects of Beelzebub’s physical and emotional life materialized for me. The wardrobe also lent to the discovery. For instance this season’s Infernal Palace storyline had Beelzebub in his royal vestments – and in putting those on, there’s immediately a sense of power and wealth, and that informs the stature. It’s a constant process of discovery.

TrunkSpace: For fans, the final product of a film or series is always the most memorable part, but for those involved in a project, we’d imagine it goes much deeper than that. For you, what is something about your time working on Chilling Adventures of Sabrina that you’ll carry with you through the course of your life/career?
Leis: I think what’s become apparent only in retrospect, is how my instincts and ownership in playing Beelzebub have evolved. And I’ve been able to experience that because I’ve played him in two seasons now. The trajectory is interesting – from jumping in on that first episode, having some ideas in mind, but not sure if they’d work with the tone of the show, to now, where playing Beelzebub is like putting on a familiar jacket.

TrunkSpace: You train in Brazilian JiuJitsu. Are there parallels between training in martial arts and training as an actor, especially in terms of commitment and personal investment?
Leis: One hundred percent. You just said it – it’s commitment to the process, and the long game. I don’t think you can become great at either without putting in the work year after year. It’s the 10,000 hours rule. I think you don’t start finding that flow and nuance and state of grace until you’ve been swinging the bat for a while.

TrunkSpace: Fascinating fact about you that we had to ask about… you spent (high school) summers in Nevada working in geological exploration. Which leads us to our next question, what is the most interesting thing you’ve ever stumbled on out in the desert?
Leis: Probably a tarantula. This was actually in Arizona – we were walking down this dirt path and came around a bend and there it was – a big ol’ fuzzy thing. I had never seen one in the flesh and it definitely gave me the heebie jeebies. We had shovels with us and wanted to gently nudge it to the side, so we didn’t have to step over it, but when we did that it jumped like I’d never seen a spider jump – which was a number of feet. That was one of those moments where every hair on your body stands up.

TrunkSpace: Where are you hardest on yourself as an actor and how do you overcome those self-critical insecurities?
Leis: I’m glad you asked. I’m interested in this conversation – I think it’s important to shine a light on our struggles so we can humanize them, take the shame and heaviness out of them. I think the idea of perfection has to be eliminated from any person’s mind, and certainly from any artist or performer’s mind. There has never been a time where I’ve walked away from a performance, whether it’s on stage or in front of the camera and thought, ‘well I nailed that’. Even when the scene has felt good and there’s been electricity with my scene partners, afterwards there’s always a feeling of unrest in the back of my mind. I’m more comfortable with that mental irritation now. When I was younger I used to think that it meant something was wrong, that I had screwed up, that I wasn’t enough, wasn’t talented enough. It was actually very recently when I realized, ‘oh that feeling is never going away. It’s part of the process’. I’m still as excited as ever about the work – I put in the effort, commit to the emotional and physical, and enjoy it, that hasn’t changed – but I guess what saves me is, I’m better at just letting things go… and at the same time, I’m more comfortable with being uncomfortable. I think meditation has been instrumental in all that.

TrunkSpace: What has been the highlight of your career as a whole thus far?
Leis: As far as getting to explore a character over a longer story arc, Sabrina has been a highlight. And that the role happens to be this iconic demon from the Bible and medieval literature… and Bohemian Rhapsody, I mean, it’s so wild! I could never have predicted that a role like this would come around.

TrunkSpace: Time machine question. If you could jump ahead 10 years and get a glimpse of what your career looks like a decade from now, would you take that journey? If not, why?
Leis: Sometimes I think, if 20-year-old Nelson could see what I’m doing now, maybe he would be kinder to himself and more confident in his path, but I’m here now, having taken a long winding road and I don’t regret it. Some actors jumped on the career Autobahn right out of the gate, but that wasn’t my path. I dig my story. But to jump forward 10 years, no, that’s not appealing. I know the quality of life, of relationships and work that I’m interested in. I don’t know exactly what the results will look like, but that’s fine, I trust the process.