We’re all chasing individual dreams and running down specific goals. For prog rock icon Neal Morse, he caught up to one of his own creative objectives with his most recent album, “Life & Times,” which he calls the singer/songwriter album that he always wanted to make. (Check out our review here.)

We recently sat down with Morse to discuss growth through personal difficulties, the heartbreaking motivation behind the song “He Died At Home,” and why he wanted “Life & Times” to exude warmth.

TrunkSpace: You’ve been writing music for decades. As you have gotten older, what has impacted that process more – is it you changing as a person or the world changing around you?
Morse: Oh, I don’t know, I suppose it’s a bit of both. It’s probably me changing more, I think. Writing is very often more of an inner thing. Even the way that we perceive the outer world all comes from the inner space, so to speak. So, yeah, I think I’ve changed, and you can definitely hear that through the course of my albums.

TrunkSpace: Do you still relate to the guy who wrote some of your earliest songs?
Morse: I relate to it, yeah. Sure. I remember being super angry a lot, and it really makes me more thankful for where I am now. I think it’s important to remember where God’s brought us from, and then also it helps us to have compassion and all the good stuff helps us to be relatable and to reach out to others in a way that’s understandable and works.

TrunkSpace: Does “Life & Times” mark a musical milestone in your career in that, is it sort of a creative transition for you in 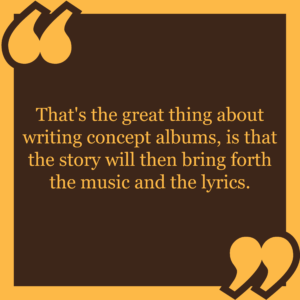 terms of just how you’re approaching music as a whole?
Morse: No, not really. It’s its own thing. I feel like it’s a milestone because it’s the singer/songwriter album that I’ve always wanted to make. I’ve tried several times, and I did some pretty good singer/songwriter albums – I think “It’s Not Too Late” is good, “Songs From November” is good, but I feel like “Life & Times” is just a step up from there. I don’t know how that happens. It’s a lot of factors, but mainly, it just kind of happens and you write a series of songs that are kind of special. That’s what I think happened with “Life & Times.” It all starts with the song.

TrunkSpace: So from the perspective of it being a singer/songwriter album, did you consciously approach it as a storyteller?
Morse: Well, it just kind of occurs. You’ll start off with something, maybe a thought or sometimes it’s a riff – you’ll just start playing something and you’ll start singing over it. “Oh, what should I say?” And then you start thinking, “Oh, well, it would sound good to say something like this…” And very often one line, the whole song, or sometimes a whole album if you’re doing a concept album, will really sprout from the seed of just a couple lines. “He Died At Home,” for example, that was something that always stayed with me that I’d heard at a prayer meeting years ago. A woman got up at a prayer meeting and said, “Would you pray for our servicemen? We’re going to a funeral almost every week.” It was near an Army base, and when we asked how he passed away, they’d say, “He died at home.” And that always stayed with me. Then I got a text that a friend of a friend had died, an ex-military guy. Then, I Googled this article. So there was a bunch of different factors. I started writing from this article about a guy who had come home from Afghanistan and committed suicide. His name was William Busbee. But it really all came from “He died at home.” Then you start thinking, “Okay, how am I going to tell this story, and how much of it do I want to tell?” It’s very intuitive, and very challenging, but very rewarding when it all comes out in a good way. 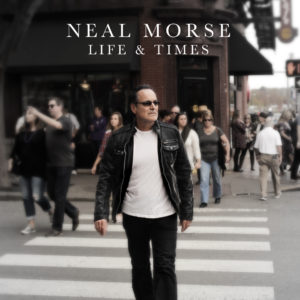 TrunkSpace: Are you someone who has a difficult time shutting off the creative brain? Are you always observing and absorbing?
Morse: No, I don’t think I’m always in that mode. Very often I’m more in the mode of, if I’m composing or if I’m in the middle of working on an album or writing it, I’m usually thinking about, “Where does it stand? Where are we in the piece? And where should it go?” I’m very often thinking more musically than story-wise. That’s the great thing about writing concept albums, is that the story will then bring forth the music and the lyrics. It was that way with “The Similitude of a Dream.” Once we figured out the story we were going to tell, then that brought forth a lot of the songs. They just sort of fell out. They just came really easily.

TrunkSpace: You mentioned how “Life & Times” was the singer/songwriter album that you always wanted to make. While you no doubt have a personal connection to everything you create, do you have a deeper bond with these 12 tracks because it’s been something that you’ve yearned for?
Morse: Yeah, I think so. I feel definitely more connected to this record right now. But, you know, you’d have to ask me in five years. As Mel Brooks once said, “I’m always in love with the girl I’m dating.” (Laughter) Of course, being married, I don’t know if I should say that. (Laughter) But musically, I’m almost always enthralled with the recent child… the most recent birth. So, we’ll see in the long run, but I feel like, yeah, it’s a special time. And I feel like the way God helped me to orchestrate and record the album… I was originally, for example, supposed to record it with a couple of younger guys that I love to work with, but they became unavailable at the last second. We were supposed to record it in July, and suddenly they said, “Well, we have one day free.” They were just booked. So I had the choice of, “Well, should I wait until they have more time?” And then I looked at my schedule. I was touring in August with the Neal Morse Band, and then I had Morsefest coming, and I thought, “Man, if I don’t make this record now I don’t know when I’m going to.” So I started making calls around Nashville, and I remembered I’d done some worship records with a drummer named Scott Williamson that I really liked. I thought it was kind of miraculous because we’re talking about, “Hey, can we record this next Tuesday?” And it was Thursday. A lot of the A-list people, they’re booked. They’re just booked for a while. But Scott had time. I sent him a bunch of the songs and he started charting things out.

Anyway, it just came together in a beautiful way – all the people that worked on it. I just felt like Chris Carmichael’s string arrangements were just inspired, and extraordinary, and beautiful. And Rich Mouser’s mixes, and Terry Christian’s mixes are just… I’m really in love with the tone, the warmth. I kept telling them, “Make it warmer. When people put this record on I want them to feel the warmth.” So I’m really happy, because I feel like we have really achieved that, and many of the responses that I’ve been getting say exactly that. “I feel like this album is so welcoming and warm,” and I just smile to myself, “Yes. We did it.”