In an industry where so much is out of your control, you can easily be let down when things don’t go according to plan. Thankfully for actress Natalie Malaika, who can be seen appearing in the new Netflix thriller “Fractured,” planning has never been a part of her plan, which keeps her future flexible.

“I find extreme bliss in doing what I love as a career because it doesn’t feel like work,” she said in an exclusive interview with TrunkSpace. “And as time goes by, if that continues to be true, I would absolutely continue on this journey.”

We recently sat down with Malaika to discuss working on a Netflix project, learning on set, and what kind of on-screen badass she wants to play.

TrunkSpace: Your journey in the arts began as a dancer and musician. What made you transition from those first loves into acting, and ultimately, was it a leap that you were hesitant to make because of how difficult it can be to break in?
Malaika: When my interest in the performing arts as a whole first began, my mom enrolled me in all sorts of classes, including acting. She wanted me to find what I loved most, and somewhere along the way dance and music became the forefront of my focus and acting got placed on the back burner. I think that happened for a few different reasons. The precarity of the industry definitely created some hesitation, but more than that, my lack of knowledge on what to look for when navigating through the sea of contacts and representatives. It wasn’t until I attended an arts high school, as a dance major, that I started to dabble in acting again — we were encouraged to explore art forms outside of our major. I now had access to the guidance I needed earlier on to navigate the acting industry. So with that, I found an amazing talent agent by my senior year and began to take acting seriously.

TrunkSpace: When you decided to pursue acting professionally, did you put a plan in place – short or long term? What kind of path were you hoping to pave for yourself and do you feel like you’re on it now? 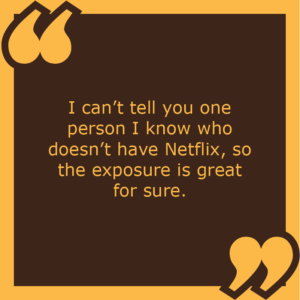 Malaika: Not right at the onset. I more so started to plan while I was in my final year of university. To be honest, I’m not much of a planner, though I do understand the importance of setting some semblance of a layout in order to establish direction. My path is still a work in progress – I’m still a work in progress – but when I took a leap of faith and moved to Vancouver from Toronto that was the first part of the plan. Now I’m slowly seeing the pieces fall into place.

TrunkSpace: Netflix is the pinnacle of original programming these days. What is it like being a part of a project for a platform that seems to literally be in every home and on every device? Is it exciting beyond the work itself given the size and scope of where “Fractured” will live?
Malaika: It’s so crazy. There are other productions I’ve been in that are also on Netflix and I’ll randomly have people who I haven’t spoken to in years messaging me on Instagram with a screenshot of me! It’s so weird but awesome all at once. I can’t tell you one person I know who doesn’t have Netflix, so the exposure is great for sure.

TrunkSpace: Did you view your time on “Fractured” as just as much of an education as you did a job, because there are some heavy hitters involved in the project both on screen and behind the camera that we would imagine you could absorb a great amount of knowledge from?
Malaika: Totally! Any set that I step on I consider it an educational experience. I’m always striving to be better at my craft everyday; whether I’m reading scripts, attending classes, watching films and television shows with a critical eye, it’s important to me. I learned so much from observing Sam Worthington and his work ethic and his engagement on set. Brad Anderson, the director, was also such a joy to work with, and was a great source of knowledge. His vision and the way he invites you into his vision is wonderful.

TrunkSpace: For fans, the final product of a film or series is always the most memorable part, but for those involved in a project, we’d imagine it goes much deeper than that. For you, what is something about your time working on “Fractured” that you’ll carry with you through the course of your life/career?
Malaika: How important it is that everyone has the same vision in order to successfully execute the mission, which is to create great content. Brad and the producers did exactly that.

TrunkSpace: We started our chat talking about your earliest entertainment industry roots. Is dance and music still a part of your life, and if so, how much creative energy do you put into them these days?
Malaika: I consider myself an actor who also dances and plays piano. A few years ago I would’ve said the opposite. Although dance and music are still very big passions of mine, my focus is primarily on acting right now and working on that craft. So, for now, I’ve placed dance and music on the back burner this time. 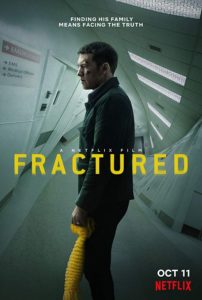 TrunkSpace: If someone came to you tomorrow and said, “Natalie, here is a blank check, go greenlight whatever you want for yourself to star in.” What kind of project would you put into development?
Malaika: If you know the movie “Colombiana” with Zoe Saldana, it would be that! That was a great movie! I want to play a badass assassin role. Use my dance background and perform my own stunts.

TrunkSpace: What has been the highlight of your career thus far?
Malaika: That feeling of being a working actor. Does that count? I think every actor can relate to going through a lull in their career, especially in the beginning stages. Since graduating from university, I’ve been able to zero my focus in on acting and developing my craft. As a result I notice a positive response to that. You really do get out what you put in.

TrunkSpace: Time machine question. If you could jump ahead 10 years and get a glimpse of what your career looks like a decade from now, would you take that journey? If not, why?
Malaika: That’s a tough question! As I mentioned before I’m not really much of a long term planner. What I know right now is that I love acting and the performing arts. I find extreme bliss in doing what I love as a career because it doesn’t feel like work. And as time goes by, if that continues to be true, I would absolutely continue on this journey.

“Fractured” is available now on Netflix.