Spanning the different eras of the beloved franchise, the new animated miniseries “Star Wars: Forces of Destiny” features a number of the iconic female characters familiar to fans and spotlights the previously unseen moments that made them the heroes that they ultimately become. Many of the big screen talent involved in the franchise will be reprising their roles, including Daisy Ridley, Lupita Nyong’o, John Boyega, and Felicity Jones. The 16 episode run kicks off July 3 on Disney’s YouTube channel and then premieres on Disney Channel July 9.

We recently sat down with the series’ sole writer Jennifer Muro to discuss what it was like to get to play in the “Star Wars” sandbox, how far animation has come over the years, and why a series like “Forces of Destiny” is made with both children and adults in mind.

TrunkSpace: We’ve been talking quite a bit lately with people about diversity in writers’ rooms, particularly on scripted live action series. One area we have yet to touch on with people is how diversity is represented in the animated series landscape. Can you shed some light on that area of things?
Muro: Well, I do tend to do a lot more action shows and there are less women in that. It’s changing. It’s getting more and more these days. I think in the younger space there’s a lot more female writers. It’s slowly shifting, which is great. Writers’ rooms are fun. I love writers’ rooms. I think they’re great. I do a lot of freelance and when I get a chance to do a writers’ room I love it because I thrive in that kind of environment and bouncing ideas off of people. I write so many scripts all year long, having to do it solo… writers’ rooms are just so much easier for me. I hope I get to work with more women in the writers’ rooms at some point. That would be great.

TrunkSpace: Are writers’ rooms more common in the animated space with a series based on a franchise because there’s already an established universe and you’re working within parameters, either story-based or because of particular character restrictions or goals?
Muro: Yeah. Definitely having well known characters makes a huge difference in the creation. And, what version. Each show is a little different or each time the characters’ incarnation is a little different. There’s that too that you have to think about. 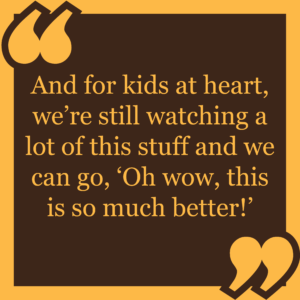 TrunkSpace: You’re working on “Star Wars” and that’s a property that has long had a diverse cast of characters… real and fictional in terms of their race/species. As a writer, how do you find the voices of those characters who not only have a different background than you, but actually have a different background than anybody?
Muro: (Laughter) I think there’s universal feelings no matter what and I think that’s really where you’re going to pull from. Motivation, human or humanoid or whatever that may be, I think there’s some universal things. And as long as you tap into those core universal themes, you’re going to be fine.

TrunkSpace: When you look at the worlds that most writers would love to play in the sandbox of, “Star Wars” is probably at the top of that list. What was the experience like for you in learning that you’d get to do that?
Muro: It was exciting. It was surreal. It was a dream come true. It was mind blowing and big. I wouldn’t say overwhelming… I would say exciting. It always feels like forever before you can talk about it or before it comes out and it’s finally here and it’s thrilling that it is. I can actually see toys and images and it’s a nice thing to happen.

TrunkSpace: Animation has changed so much over the years. When we were kids, animation wasn’t nearly as sophisticated as it is today. It wasn’t character-driven.
Muro: Right.

TrunkSpace: Today they feel like they’re made for kids, but at the same time, for adults as well.
Muro: I absolutely think so and I’m glad they’re doing that because the younger audience will gain a sophistication in what they expect in their storytelling. They’re not being talked down to. I’m glad they’re doing it that way because it just benefits everybody.

TrunkSpace: Even the production quality back when we were kids was shady at best. Something like the old “G.I. Joe” cartoon would suddenly have characters appear in a scene without pieces of clothing colored. (Laughter)
Muro: (Laughter) Yeah. Hanna-Barbera was notorious for that kind of thing where eyeballs would be colored in by mistake rather than being white. (Laughter) That happened all of the time.

We were fine with it as kids, I think. Sort of. You just kind of got through it, I guess. (Laughter) But yeah, it really matters these days. The quality is just phenomenal. I think we’re super lucky now. And for kids at heart, we’re still watching a lot of this stuff and we can go, “Oh wow, this is so much better!” (Laughter)

TrunkSpace: And what’s so great about “Star Wars” is that it’s the kind of property that parents WANT to pass down to their children. It’s something that many of them share together and animation is a great way to sort of get the ball rolling.
Muro: Absolutely and I think that’s what we’re hoping to do, to start showing them this world in a truly accessible way.

TrunkSpace: With animation being so sophisticated these days, does it feel like you’re actually not working in the animation space at times?
Muro: Yeah, especially with this kind of project.

There is budgetary stuff. There are certain assets that you can’t use and that you can use so you have to limit certain things, but especially because you’re working with an “Empire Strikes Back” or a “Return of the Jedi”, so of course you’re thinking of the movies. I was thinking live action in that way and I think that’s probably a good thing.

TrunkSpace: Thinking in that real world way gives the characters themselves a more real world POV and kids certainly can pick up on that. They know when they’re being fed something that isn’t of the reality that they know, even when it takes place in fantastical worlds.
Muro: Yes, they do. You don’t want a false construct. Lucasfilm definitely did not want to do that. We wanted to make authentic “Star Wars” stories. I’m hoping they (kids) will see that, they should feel that, and that’s what we were going for.

TrunkSpace: With an established universe and characters, in a time when so much of it is being shared across multiple platforms and planned out for longterm roll out, how much of that did you have to take into consideration so as not to step on the creative toes of what’s being done elsewhere?
Muro: Well, the Lucasfilm’s Story Group makes a huge difference when working with them. They know their world so well and they’re not going to let anything not be true to the world and the characters. It was definitely a big job to tell all of the different stories, but it was an exciting one to go through all of time and space, literally, to tell these individual stories. But having them do it with me makes all of the difference.

TrunkSpace: Did you give any thought to the fact that the super die-hard “Star Wars” fans will be watching it and dissecting it based on their own knowledge of the universe?
Muro: Yeah. And I am one of those fans. (Laughter) I always worry. “Are we doing this right? Is this the right thing? Is this continuity okay?” But like I said, I had the Story Group with me, so that helps.

TrunkSpace: Especially in the social media age! (Laughter)
Muro: Exactly. And I have no doubt they’ll let me know! (Laughter)

TrunkSpace: You mentioned that you are a longtime “Star Wars” fan yourself. With that being said, it must be kind of cool to know that at some point down the road, writers will be mining your own work within the franchise for future stories and continuity?
Muro: You know, that’s interesting. That’s one of those surreal moments that hits you that it could possibly happen. I think once they’re out and I can see them, I think it will become more real to me. But, yeah, obviously that would be a dream come true.

TrunkSpace: If we were to go back and sit down with 15-year-old Jennifer Muro and we asked her what type of writer she wanted to be, would she have the same answers as you have now in terms of where you are in your career?
Muro: It’s really hard to get bigger than “Star Wars.” I think there’s some live action stories that I want to start telling and going more in that direction… but always keeping the door open in animation for amazing properties like this. There’s so many more stories to tell in animation, for live action properties.

I’m thrilled where I am, of course, but I just want to keep going and tell bigger stories.