With so many television shows airing and streaming, it seems like it’s getting increasingly more difficult to generate genuine fandom buzz for any new series set outside of a Marvel or DC universe. That’s why the continuing aura of excitement surrounding BBC America’s “Dirk Gently’s Holistic Detective Agency” is so, well, exciting.

With season 2 now underway, the series based on the Douglas Adams novel is growing more and more popular as fans of quirky storytelling embrace the uniqueness of the supernatural detective narrative. As Ken, series star Mpho Koaho brings his own singular on-screen presence that not only helps build out the world, but solidifies the Toronto native’s reputation as one of the industry’s best character actors.

We recently sat down with Koaho to discuss the diversity of Dirk Gently, why television was a scared cat for a very long time, and how the fans are just as unique and diverse as the show itself.

TrunkSpace: “Dirk Gently’s Holistic Detective Agency” is unlike most other shows on television, both in premise and tone. What does that uniqueness offer you as an actor, from a performance standpoint? Does it open doors in what you can do in your performance?
Koaho: 100 percent. I think the uniqueness of it starts from the diversity of everything. It’s uniquely diverse, and not just from a racial or a gender standpoint. Obviously now we’re introducing fantasy, and the Rowdy Three, and just all the diverse characters on the show like Bart Curlish. We’ve got a mix of players.

And then in terms of performance, it gives you great freedom because you’re not following any kind of conventional template. Max Landis’ writing style – I think why he’s so good writing this Douglas Adams fandom is because he’s similar. He understands the craziness of what Douglas Adam’s writing is, so then Max gives an actor just immense freedom from a performance standpoint. Because your character’s already unique – he’s written you in a very uniquely diverse way – and then the dialogue is just left of everything. I think it’s very à la Douglas Adams, in terms of the uniqueness and the craziness of it all.

I think that’s what’s appeased fans, as well. Outside of the Dirk character, in this adaptation, Max has created every other character, yet he still has appeased diehard Douglas Adams’ fans.

TrunkSpace: It feels like the kind of show that, in a season or two, other shows will try to emulate, but right now, it’s very much it’s own thing.
Koaho: That’s very well-articulated. These are things I think about every day as an actor, and have thought about for 20 years in Hollywood. And the thing is, specifically the person writing this, Max, grew up in Hollywood.

It’s interesting that I can articulate what I did from being around, and then exactly the same thing permeates within Max’s world, because he was raised by John Landis and very much grew up understanding the exact same thing you mentioned. I think that’s very prevalent in Max’s mind, in his world, and I think he attacks it that way, so I think those are things he’s aware of. I really, really do. I really think he’s aware of that and, while maybe not tries to get away from it, he just goes, “I’m not gonna do that.”

I think he’s just so unique that he doesn’t even have to try to not be something. It’s just so easy for him, and I think it’s because of growing up in Hollywood, and understanding the repetitive 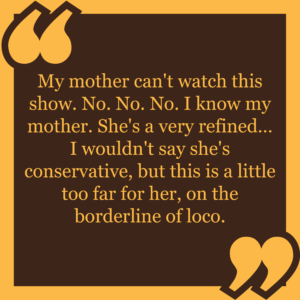 TrunkSpace: With that unique feel of the show, do you think the show has a cap in terms of the people it can reach? Like for example, while we love the show, we’re not sure our moms would be able to get invested. (Laughter)
Koaho: I totally agree with you, and obviously in a perfect world you want to think your show can reach anybody, but not any show is necessarily either appropriate for everyone, or someone’s cup of tea. I would speak to Dirk not being everyone’s cup of tea, specifically because there are many refined people in the world, a little more reserved, conservative, sheltered who would say, “We don’t really do much.” To put Dirk Gently in front of them, to put what we do on that show, will be a lot for some people, no doubt. No doubt.

You’re absolutely right. My mother can’t watch this show. No. No. No. I know my mother. She’s a very refined… I wouldn’t say she’s conservative, but this is a little too far for her, on the borderline of loco.

TrunkSpace: But at the same time, that’s the beauty of television in today’s world. It can be geared towards certain likes and dislikes because there’s so much content available now.
Koaho: Well, in terms of television, television was a scared cat for as long as it’s existed. Literally, television was a scared cat, network television, and then HBO and Showtime, they grew a pair and gave us adult television. I’ve never been against network TV, but I understand their reasoning. You’re in people’s homes. A six-year-old or a seven-year-old could turn on the TV and see “The Sopranos” if that was network TV.

I get the shackles of network TV, but it wasn’t until I came to an HBO, a Showtime, where I really started to enjoy television again, and I’m talking about the kid that grew up on sitcoms. It took getting to this point. I think it was “Dexter” before I really could say I loved television again. “Dexter” got me back.

TrunkSpace: So purely from an acting standpoint, is TV more interesting now just because everything is so character-drive and performance heavy?
Koaho: Well, I would say the actor that I am cares about the character-driven stuff, because I’m very ‘character actor’ and obviously if you know anything about my career you can see that, but there’s an 11-year-old in me who’s just not this uptight actor, and that’s a fan of stuff that just doesn’t look at it that way, that looks at it from a less serious place – the kid that was watching “Beauty and the Beast” on the plane going to San Diego Comic-Con.

Someone comes up to me like, “What are you watching?” I’m like, “I’m watching ‘Beauty and the Beast’, god dammit!” I had a fucking blast, man. That’s what I love about me. I’ve learned the business working 20 years, so the character-driven stuff matters – holy crap, it matters to me, especially as an actor, but then the kid that started acting appreciates the diversity of a Dirk Gently. Not even the actor, the black kid, the African that I am, appreciates the diversity in my show, and the direction, from a diversity standpoint, television is going in.

TrunkSpace: And there’s diversity in the characters from an emotional standpoint. There’s more broken characters now than ever before.
Koaho: See, there you go. That’s realistic. People are not perfectly emotionally in check, man. Holy crap. Look at Marvel with the flawed superheros. That’s realistic. Most of those heroes are probably gonna be loaners anyway, right? The idea for them to be affected emotionally that way, that’s very realistic, so it’s amazing how TV was almost selling you what movies were forever. And to be very honest, television, network TV… I don’t even want to just say network TV, but mostly network TV… is still a beauty contest. I don’t care what you say, it’s a beauty contest. It’s just, “Put a lot of really pretty people in roles, put a lot of really pretty people on TV and see what happens.”

I sift through so much… so many scripts, so many auditions, television… I’ve sifted through so much stuff to get to this point doing a Dirk. I’m not here reading for CW stuff every day. No disrespect to the CW, no disrespect to anybody working on the CW, but that’s not my shit. That’s not who I am. I don’t want to do a CW show, and real talk, honest to God honesty, outside of maybe like “Black Lightning,” I don’t know if you’d ever catch me on the CW because I don’t know if… especially coming off of having read for a lot of things, pretty much everything, you grow to a place where you realize, “This is not how I want to be represented. This is not how I want to be portrayed.” So you realize, “I wouldn’t audition for that show again,” or, “I would audition for this show every day of the week.” I can’t do certain things. They wouldn’t put me in certain things because I don’t fit that look… I don’t fit that mold, you dig? I’m the most unique character actor, so we have to always take our time and find the most unique thing for me.

TrunkSpace: You spent numerous years on “Falling Skies,” so you know about passionate fandoms. How does the Dirk Gently fandom compare in terms of the passion and commitment to the material?
Koaho: I don’t think I’ve ever seen anything like this, to be honest. “Falling Skies” was very supportive, very loyal, but Dirk Gently fans are locos, man. I have such respect for them. You know what I really love about the Dirk Gently fandom? Just how different everybody looks! Just the quirkiness of everybody, and just how unique and different everybody is! I look at so many of these beautiful faces, and I go, “You know, that is not who I expected to see.” That’s so pleasant, because I’m sure people say that about me sometimes, with certain projects they see me in. They would have seen me in something and say, “Wow, I never expected Mpho to do something like this. Wow, he was really good.” That’s a pleasant surprise.